Spotify Removed My Album Because Of Seemingly Fake Streams 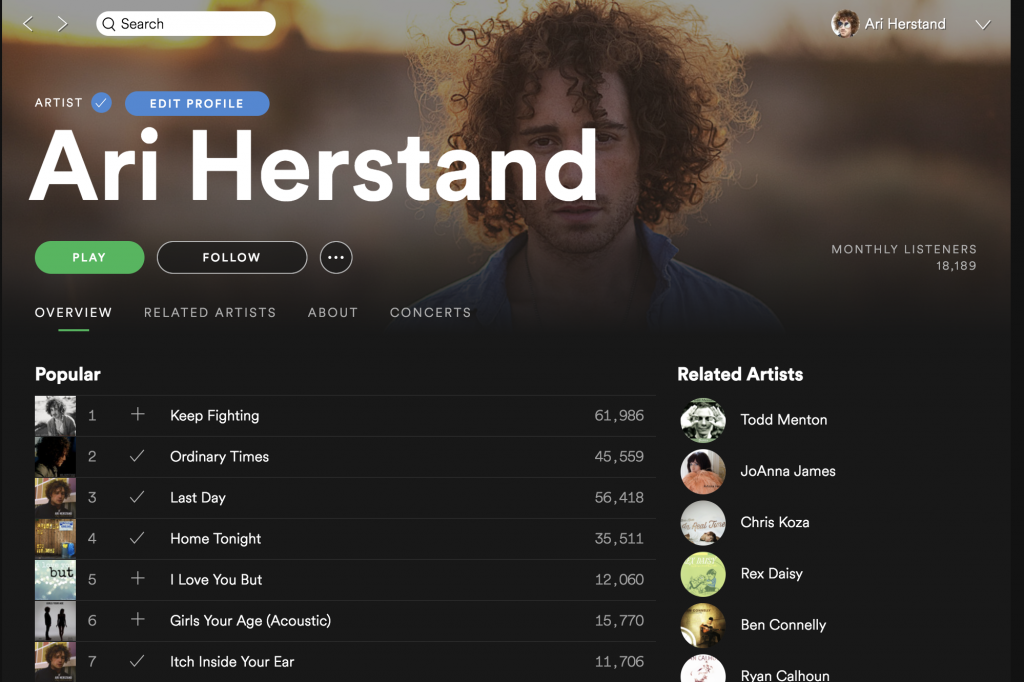 A few people have noted recently that I haven’t released a song in two years and how it can seem hypocritical as I instruct musicians to regularly release music.

We’re in a fast food society where people’s attention spans are shorter than ever.  You can’t just release an album every three years and expect your fans will stay engaged with you when other musicians are feeding them content on a daily basis.

It’s best to have a constant stream of content to satiate your fans.  That content could be songs, videos, photos, Snaps, tweets, emails, texts, shows and live streams.  A combination of them all is typical — utilizing the social platforms where your fans exist.

I’ve been in a weird place in my career lately.  And the main reason why I haven’t released music under my own name in two years is because, well, for one I was hired to write a 450 page book — which took over a year to write.  And then I spent a year promoting it.  But moreover it’s because I’ve been in and out of the studio the past two years working on a brand new funk project set to be released at the start of 2018.

After 600 shows (performing in venues from living rooms to arenas), 3 full length albums, an EP, 2 live albums, about 10 singles and nearly 60 TV, film and commercial synch placements, I’m taking a hiatus on my singer/songwriter project as I prepare to launch this new funk band.

Why am I telling you all of this?  I rarely discuss my own music because I never want my column to be about me or my music, but rather about relaying everything I’ve learned so you have the info to help your career.

Well, I learned a valuable lesson this week.

+How To Get Music In Spotify Playlists

I’ve been investigating Playlist Plugging companies for the past few months and just started to try some and relay my findings.

From my How To Get Music In Spotify Playlists article I discovered a company whose founder told me that he was able to nearly guarantee 50,000 – 150,000 streams based on their playlist network.  They charged $500 for a one month campaign. That company was acquired by a label and no longer offers their services publicly.  I also heard of other playlist plugging companies that charged double or triple that and didn’t have very good success rates.

A manager friend of mine who works at very prominent management company with bands you have heard of (hiding his name to protect the innocent), recommended a few playlist plugging companies he’s used that have worked for them.  I decided I would try them out and write about my experience — if I could afford it.  One of them quoted me $5,000 for a 4 month campaign.  So that one was out.  But one of them claimed they could get me about 50,000 streams for $150.  Doable.

I was a little concerned when they didn’t ask to hear my music, which seemed odd, but this company, I thought, was a hidden gem considering it was referred by such a trusted source.  I read their brief FAQ and it seemed legit — very similar to the other playlist plugging company I interviewed (that got acquired by a label).

Sure enough, within a few days I noticed the song had been added to a fairly popular user generated playlist (of about 50,000 followers).

Before I started this campaign, I had had about 300,000 total streams on my songs on Spotify.  Now, this doesn’t seem like a lot in the streaming world, but considering I was on relatively few playlists (no gigantic ones), it’s a number I was satisfied with.  These are “fan streams” — versus just streams from people who follow a playlist containing a song of mine.

It’s important to note that tons of streams doesn’t mean tons of fans.

But back to the matter at hand.  My song “Keep Fighting” which had been released as a single and as an album cut on my 2014 album Brave Enough, was included on a popular playlist of 50,000 followers.  I figured it had gotten included on a few more as well that just hadn’t registered in my SpotifyArtists account — as oftentimes (I’ve noticed) the information isn’t super up to date or reliable.  But then on Tuesday, I received an email from CD Baby (who I used to distribute Brave Enough) explaining that Spotify removed my album because they thought there was abuse happening.

I wrote CD Baby back and explained that I used the playlist plugging company Streamify and they must have been employing some shady business.

After some more digging, CD Baby said it looks like Streamify is using click farms or something. The song did, in fact, get included on a popular playlist and Streamify’s FAQ states:

“Spotify track plays are sent to our huge partner list that includes music promoters, DJs, online radio stations, playlists and various other parties. We provide them only the Spotify URI of the tracks you give us.”

How Streamify is getting the streams must not be legitimate, though.

And the playlist(s) my song got included on, similarly, must not be legitimate either.  But I’m confused how they are able to forge 52,000 user accounts as Followers on the playlist.  I wish I could get some clarity.  I also noticed that one of the playlists listed in my Spotify Artists account is the algorithmically generated, Discover Weekly — which could be why there is an additional spike in plays.  This also just happened this week.

The lesson learned (I think) is if you’re going to work with a playlist plugging company, of any kind, make sure to talk to a person there and make sure they are pitching your songs to legitimate playlists — either user generated or official Spotify created.  I would also say only use companies referred by trusted sources, but that’s what I did and it’s why I ended up in this horrible position.

It’s the Wild West out here in the music industry — especially on the streaming front.

So it’s hard to know what is legit and what is not.  Some people swear by playlist plugging companies, some call them outright scams.  Some people swear by SubmitHub, some call it thievery.  It’s very hard to distinguish what is legitimate these days.  But I’m doing my best to figure this out and pass on what I learn.  If this happened to me — someone who investigates this stuff for a living — it can absolutely happen to anyone.

I wish Spotify would make a policy we all could follow.  Like, if they just came out and said “We don’t allow Playlist Plugging companies” then, boom, easy, we would know not to use any.  But as of today, Spotify does allow this.  So it’s really hard to know what Spotify is in support of or not.

Here’s hoping this gets figured out soon.

I’ve emailed Streamify 3 times to ask what happened and to stop doing whatever they’re doing that is triggering this. As of now my album is still down. I’ve appealed to Spotify, but no luck just yet.

If you have had good or bad experiences with streaming promotion or playlist plugging services please share them in the comments.

And if you’d like to trash talk me and say how much my music sucks and how I’m a complete and utter fraud, go ahead and do that in the comments as well (however, if past articles are any indication, you need no prompting). Go team!