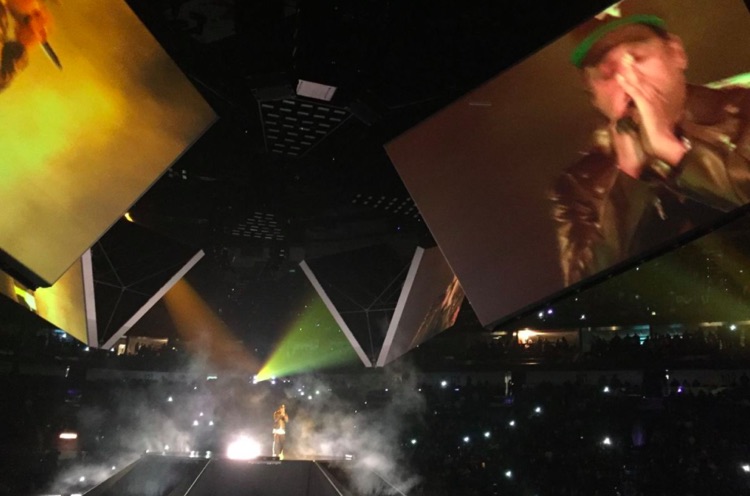 And we thought Steve Jobs’ reality distortion field was powerful.  At last week’s ‘4:44’ tour stop in New Orleans, Jay-Z doubled down on claims that his tour was smashing records.

The claims happened at the Smoothie King Center on Thursday night, where the rapper reportedly bragged about breaking attendance records at the venue.

At the show was New Orleans Advocate journalist Keith Spera, who wrote this:

“More than once at the Smoothie King Center on Thursday night, Jay-Z bragged that he had ‘officially broken’ the venue’s concert attendance record. That wasn’t true, not by a long shot.”

Spera pointed to an official tally of roughly 13,000 for the show, despite heavily-discounted tickets.  According to Spera’s sources, there were also ‘hundreds of complimentary tickets’.  Beyond that, the 13,000-mark has been beaten by numerous performers, starting with Bruno Mars — three weeks ago.

In February, Billy Joel packed the Smoothie King Center with more than 16,000 people.

Spera noted that one-quarter of the entire upper deck was unsold.

In fact, a massive black curtain covered the unsold area.  Here’s how Spera described it:

“For Jay-Z, nearly a quarter of the upper-level seats were empty, hidden behind a black curtain. That obvious discrepancy alone discredited his attendance-record claim.”

Jay-Z’s show features a massive, octagon-shaped stage with massive, folded display screens.  That approach opens a larger number of seats, though the rapper has experienced difficulty selling them.  As the tour set sail, fans were shocked to find seats as low as $6.

In response, Jay-Z and promoter Live Nation claimed that cheaper tickets were actually part of a groundbreaking sales strategy.  That strategy apparently includes $6 seats, which are somehow outsmarting scalpers while boosting the price of premium seats.

(We’ll have an update on that imbroglio shortly.)

Separately, a source to Digital Music News noted that a number of scalpers were losing money on 4:44 and dumping their ticket inventories, thanks to weaker-than-expected demand.  A report detailing the scalper dump-off could be forthcoming.