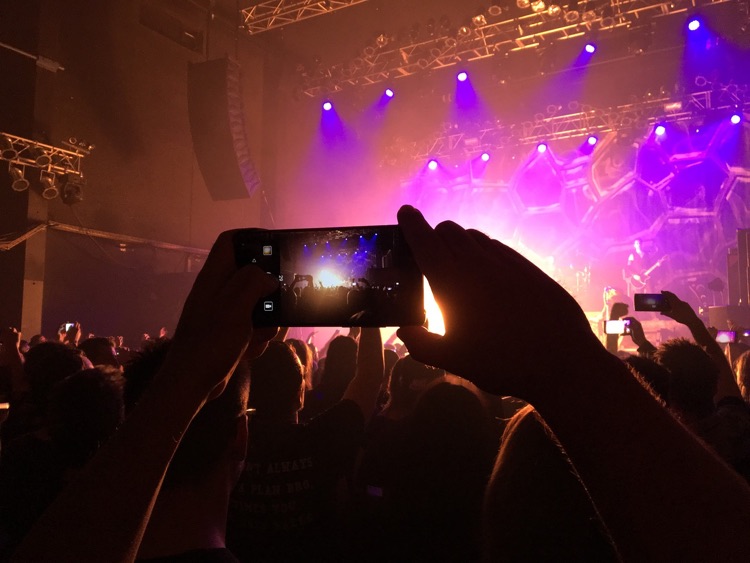 A strikingly large number of people now favor outright bans of phones at shows.  But what about the ones that want to use them?

We all know the problem really, really well.

Phones in the air, filming entire concerts and making it hard to see the actual band on stage.  Sometimes it can be cool, but most of the time it’s f—king annoying.

A lot of artists have hated this for years — but were scared to speak out against their fans.  After all, the fans are the ones paying for their tickets — and supporting the artist with their hard-earned cash.

But now, fans are starting to get irritated as well.  And newly-emerging data could change the calculation for a lot of venue owners, artists, and festival owners.

Comedians might hate the non-stop filming the most.  Once protected by the safety of closed-door venues and friendly crowds, comedians are now effectively broadcasting every raunchy joke to the entire world.  That makes it impossible to test material or push boundaries.  But even worse, one joke can kill a career if it offends the right people — most of whom weren’t at the show.

But bands have similar concerns.  Sometimes a band wants to try new material out, without it hitting YouTube 45 minutes later.  Or, say something crazy on stage without getting shamed by the internet.

Accordingly, phone-free music shows are surfacing.  Just recently, the Lumineers banned phones at a show using a clever approach.  Basically, fans were forced to place their phones into sealed pouches, which couldn’t be opened inside the venue.

Months later, Childish Gambino did the same thing for a Joshua Tree desert concert experience.  This was just for core fans, not the entire internet.

According to a study exclusively shared with Digital Music News, nearly one-third of music fans would favor an outright ban on cellphones.

The study comes from Skiddle, an event listing and ticketing company.  Obviously this information is important market research for them, so Skiddle went out and asked 1,200 concertgoers about phones at concerts.

The result? 27% said they favored the outright ban.

Skiddle actually told DMN that ‘27% of young people’ favored the ban, though we’re not sure of the exact age range here.  That raises the question of what older people think, because, after all, older people go to shows, too.  But maybe a larger percentage of older people would favor bans as well, who knows.

Here’s what people said in the survey.  Specifically, the 27% group favored bans on filming and photography.  So, one alternative is that you have to keep your phone in your pocket.

But, why did these people favor bans?  Here were the top reasons provided:

Then again: what’s wrong with filming a concert?  Let’s talk to the other 73%…

The flip side is that 73% didn’t like bans, or even hate phones at concerts.

Some simply love to capture the moment, or share their experience with friends.  A smaller group (13%) felt that it’s their right to use a phone at a show.  After all, they paid for the ticket, so they get the experience they want.

But who needs a rule when you can have societal pressure?

Who needs a rule?  After all, etiquette and social pressure can oftentimes be the greatest enforcement mechanism.  Back in the 90s, people answered cellphones at restaurants and forgot to silence their ringers in theaters.  These days, either of those is a major social faux-pas, with social ostracizing the effective penalty.

The only problem is: there’s always that douchebag in the front row…