Mixcloud’s Most Popular Genre in Every US State 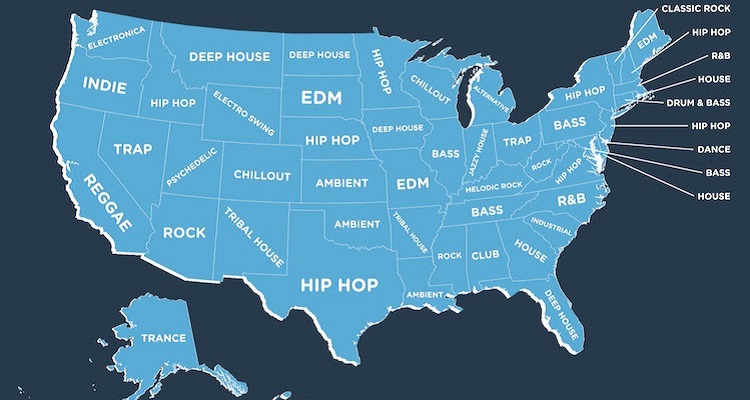 Classic Rock, EDM, Reggae, Hip Hop?  Here’s Mixcloud’s list of the most popular genre in every US state for 2017.

With the year coming to an end, major streaming music platforms have released listeners’ favorite artists for 2017.

Ed Sheeran became the most listened-to artist on Spotify.  He remains #1 with 47 million monthly listeners.  His album Divide had 3.1 billion streams worldwide.  ‘Shape of You’ has over 1.4 billion streams.

Luis Fonsi took the top spot as the most-watched music video on YouTube.  Uploaded in January, the video now has well over 4.4 billion views.

Earlier today, Mixcloud released their list of 2017’s top streaming habits of listeners in the United States and around the world.  Here’s what they found.

The rise of Afrobeats and the fall of Jazz

Around the world, led by artists including Wizkid, Davido, and Tiwa Savage, Afrobeats became the fastest-rising genre on Mixcloud this year.  The genre quickly racked up listening minutes in the UK, the United States, Kenya, Canada, and Germany.

Jazz was the 7th most-listened-to genre in 2015.  Yet, Mixcloud found that jazz music dropped to 12th place this year.  Around the world, fewer people enjoy listening to jazz than ever before.

Breaking a sweat in Australia, doing the tango in Greece, and jamming out in California.

Mixcloud also found that 50% of all minutes spent listening to working and training shows came from Australian listeners.  68% of all tango show listening came from Greece.

Back in the US, listeners in California preferred discovering reggae than any other music genre.  In addition, the digital audio streaming platform found that Massachusetts listeners most loved discovering new R&B music.

Speaking on the data, Mixcloud Co-founder and Director of Content said,

“This data not only shows how much amazing and fascinating content lives on Mixcloud, with an increasing amount of it exclusive to Mixcloud, but also the diversity of it, from reggae and hip-hop to political Podcasts and work-out mixes.  The breadth of Mixcloud’s content, as well as the scope of its reach, will only continue to expand heading into 2018, with many more incredible exclusives on deck.  We couldn’t be more excited to kick-start the new year.”

You can check out the complete list of most searched for genres in the United States below.