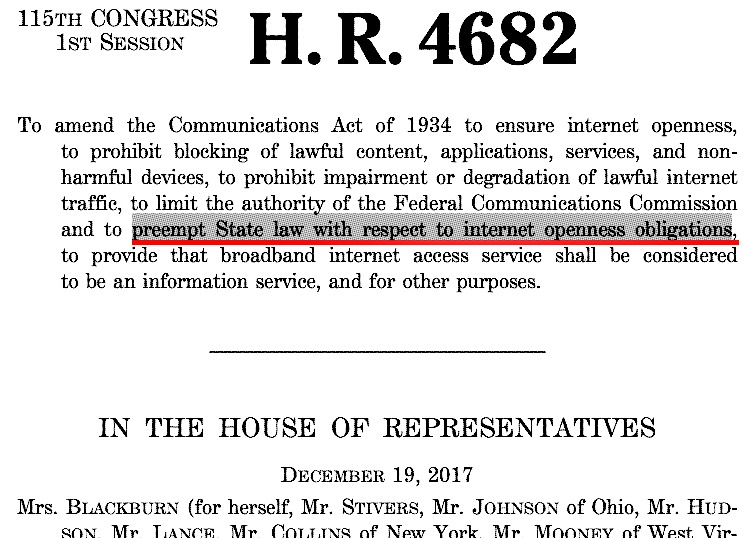 States like California are threatening to enact their own laws protecting net neutrality provisions.  This federal law would make that illegal.

Earlier this week, the FCC officially removed net neutrality provisions.  Now, Republicans in Congress are drafting a law that would make it impossible for states to fight back.

Introducing H.R. 4682, the ‘Open Internet Preservation Act,’ which explicitly prohibits the creation of any state laws relating to net neutrality.

Here’s the exact language contained within the latest draft of the bill.

‘‘(c) PREEMPTION OF STATE LAW.—No State or political subdivision of a State shall adopt, maintain, enforce, or impose or continue in effect any law, rule, regulation, duty, requirement, standard, or other provision having the force and effect of law relating to or with respect to internet openness obligations for provision of broadband internet access service.”

The bill effectively ensures that the FCC will control all laws relating to net neutrality — by making any state laws illegal under federal law.

The bill looks like a swift reaction to expected state challenges.  Case in point: in the moments following the elimination of net neutrality by the FCC, California legislators vowed to introduce legislation prohibiting ‘fast lanes’ and ‘paid prioritization’.  Accordingly, other states could follow suit, leading to a litigation nightmare for the FCC and congressional Republicans.

The bill was introduced by Communications Subcommittee Chairman Marsha Blackburn (R-Tenn.) on Tuesday.

Confusingly, Blackburn titled the bill to sound pro-net neutrality.  In effect, its aims are largely opposite.  Tellingly, Blackburn called for only ‘light touch regulation’ and a limitation of the FCC’s oversight abilities, while simultaneously applauding FCC chairman Ajit Pai.

In similar contradictory fashion, the bill “prohibit[s] impairment or degradation of lawful internet traffic,” and also “prohibit[s] blocking of lawful content, applications, services, and non-harmful devices.”  But nothing is mentioned about contentious, pay-only ‘fast lanes’.

Also missing is a mechanism for actually monitoring ISP actions against non-paying apps and sites.

Strangely, the bill also seeks to “limit the authority of the FCC,” though in the same sentence, it “preempts State law with respect to internet openness obligations.”  So, in the same sentence, this bill claims to limit the FCC’s oversight while simultaneously granting the agency sweeping power over individual states.

Observers called foul on those contradictory claims, noting that the bill mainly tries to counteract a wave of expected lawsuits from states.

Blackburn clearly seemed to be aligned with FCC chairman Ajit Pai in announcing the new bill.

@AjitPaiFCC has done his job, now it’s up to Congress to do theirs. This bill will ensure there is no blocking, no throttling. It is my honor to sign this bill- let’s get it to @realDonaldTrump‘s desk. pic.twitter.com/jOf0fvFwcd

The contradictory nature of the bill may suggest damage control by Republicans in Congress.

Net neutrality now promises to be an important issue in upcoming elections, including key battleground states.   Accordingly, that could create a huge liability for Republicans, thanks partly to anger generated by Ajit Pai.

As the head of a stodgy regulatory agency, Pai understandably lacks political astuteness.  Though his questionable jabs at opponents and rough attempts at humor may negatively affect voter sentiment.  In the end, Pai has successfully enraged millions of Americans — many of whom are planning to vote.

Here’s the complete bill — at least in its latest draft.