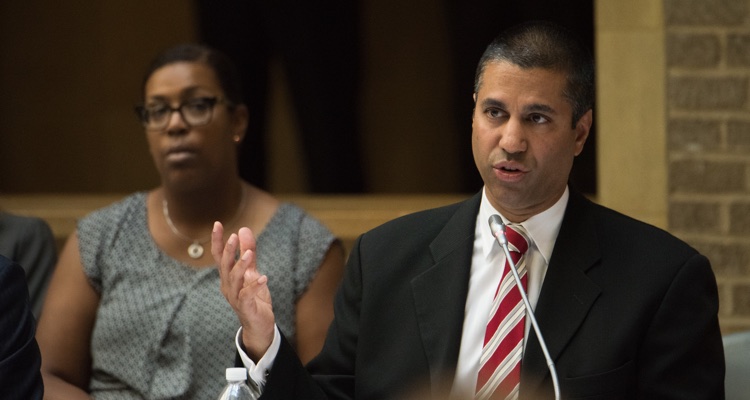 One of the most powerful regulators in the United States is having trouble leaving the confines of Washington, DC.  Just yesterday, FCC commissioner Ajit Pai abruptly cancelled a keynote speech at the Consumer Electronics Show (CES) in Las Vegas.

The cancellation, confirmed yesterday by CES organizers, comes less than a week before the scheduled event.

Pai has attended CES for the past five consecutive years, raising questions over why the latest speech was abruptly nixed.  Neither CES nor the FCC has offered a reason for the sudden cancellation.  But it now appears that numerous death threats are to blame.

According to a pair of sources on Capitol Hill, Pai’s security detail is now ‘untenable’ with ‘multiple, unsubstantiated death threats’ linked specifically to the Vegas itinerary.  One source indicated that such threats are ‘routine for presidents and vice presidents’ but highly unusual for heads of government agencies like the FCC.

“There’s not the budget for staffing [CES] from threats of that level,” the second source relayed, noting that Pai’s security detail is ill-equipped to protect against snipers, attackers, bombs, gas attacks, vehicular blockades, and other assassination attempts.  The Consumer Electronics Show is one of the largest conferences in the world, with hundreds of thousands crowding the city.

“Basically if these threats are credible, you need armored vehicles — and I mean plural — not to mention area sweeps, aerial support, and Secret Service directly manning the commissioner at all times,” one of the sources relayed.

In October of last year, a gunman opened fire on the Route 91 Harvest music festival.  The incident became the single worst shooting in US history by a lone gunman, and raised awareness of serious security vulnerabilities.

Neither source works for the US Secret Service, though both have connections to the agency and knowledge of its operations.

But it’s unclear who was making those threats, or how serious they were.  All of which makes it difficult to ascertain the seriousness of the latest threats.

Meanwhile, protesters have flooded Pai’s suburban Virginia residence following the aggressive rollback of net neutrality.   According to Pai himself, aggressive protesters have lurked directly outside of the windows of his home, displayed signs carrying the names of his children, and even distributed information to neighbors.

In response to inquiries, CES merely offered the following statement on the cancellation:

“Unfortunately, Federal Communications Commission Chairman Ajit Pai is unable to attend CES 2018.  We look forward to our next opportunity to host a technology policy discussion with him before a public audience.”

At this stage, it’s unclear if other FCC commissioners are also canceling.