It’s a 10-hour video of white noise static uploaded onto YouTube.  Now, the guy who uploaded has been slapped with 5 different copyright claims.

If you thought YouTube’s copyright monitoring system was a joke, this latest episode will make you cry.  Enter Sebastian Tomczak, a music technologist, professor and tinkerer who uploaded a 10-hour track of static, white noise onto YouTube.

Two years and 1,500 views later, Tomczak has been slapped with 5 separate copyright claims.

The claims came from four different copyright ‘owners,’ one of which claimed two separate violations. 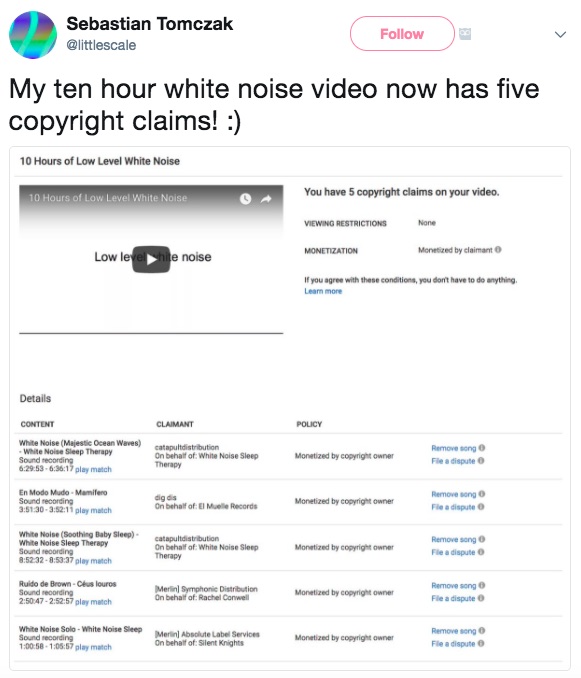 ’10 Hours of Low Level White Noise’ is actually one of hundreds (or probably thousands) of other long-play static clips on YouTube.

That makes sense: white noise sounds like the perfect backdrop for concentrating, sleeping, or just tuning out.  Which makes it a strangely competitive niche on the video platform.

Here’s an example: a video called ‘Brown Noise’ by ‘Noise Amend’ has 2.5 million views.  The ‘brown noise’ background is touted as a great way to ‘relax, study, or fall asleep,’ and even a way to beat tinnitus. There’s an ad for Wix the prefaces the video, and even an in-video link to download the multi-hour track for $3.95.

Other examples are easy to find, many with millions or tens of millions of views. Looks like background noise is cottage industry, with money to be made. Accordingly, a bunch of other ‘white noise’ uploaders are claiming that Tomczak is using their static copyright.

But, can static noise really be copyrighted?

Apparently, yes.  Which brings us to the next wrinkle in this story.  The four copyright claimants didn’t force Tomczak to remove his video.  Instead, they merely ‘monetized’ his video, meaning they’re taking the ad revenue from it.

That would make perfect sense for the outright use of a copyrighted work.  For example, if you use an Ed Sheeran song in your video, it makes sense that Ed Sheeran (or his writers) get some (or all) of the money.

Torrentfreak actually tracked down Sebastian Tomczak, and asked him what was going on.

And it turns out that Tomczak generated the 10-hour clip using open-source software.  Basically, static is a bunch of frequencies going full blast without modulation, so the effect can easily be re-created.  He explains:

“I ‘created’ and uploaded the video in question. The video was created by generating a noise waveform of 10 hours length using the freeware software Audacity and the built-in noise generator. The resulting 10-hour audio file was then imported into ScreenFlow, where the text was added and then rendered as one 10-hour video file.”

And therefore, any copyright claims are probably laughable.

And if that wasn’t enough, Tomczak says that he faced a similarly ridiculous claim a few years back.  That’s when he uploaded his own music for an office video, which was uploaded to YouTube.

“I was asked to participate in a video for my workplace and the production team asked if they could use my music and I said ‘no problem’. A month later, the video was uploaded to one of our work channels, and then YouTube generated a copyright claim against me for my own music from the work channel.”

Most likely, Tomczak isn’t going to fight back, simply because the video upload was a mere afterthought.  Meanwhile, views of the video have double, surpassing 3,000 views at the time of this writing.  None of that money goes to Tomczak, though the comments are stuffed with commenters incredulous over the copyright claims.