I’m One of the Attorneys Suing Spotify. And Here’s Why the ‘Music Modernization Act’ Makes Little Sense. 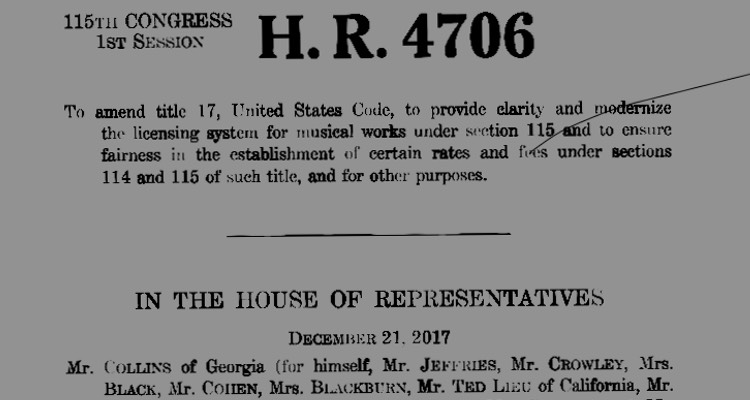 The allegations are that Spotify built a multi-billion dollar business with no assets other than the songs available on its digital platform, but without building the infrastructure needed to ensure that songs appearing on Spotify were properly licensed or that appropriate royalties were paid.

Plaintiffs assert that Spotify has publicly admitted that it is required, as an interactive streaming service, to obtain mechanical licenses to reproduce and distribute the compositions on its service.  Additionally, they knew that it was committing copyright infringement of literally hundreds of thousands of musical compositions by not doing so.

The plaintiffs assert that Spotify made the conscious decision, in the effort to be first to market and to have as many compositions on its service as possible, to commit infringement now — and ask questions later.  They further assert that Spotify continued infringing even after put on notice of the lack of licenses for specific compositions, and/or Spotify’s failure to comply with compulsory licensing requirements, as well as the subsequent termination of any licenses that had been in effect.

The plaintiffs are seeking damages and profits of Spotify attributable to the infringement, or, in the alternative, statutory damages for willful infringement of $150,000 per composition at issue.  Statutory damages against willful infringers of up to $150,000 per infringed work is in place to punish infringers for making the deliberate decision to infringe, and, in my view, is particularly appropriate in cases like the case against Spotify.

These are not the first cases filed against Spotify, or the first instance of these allegations being made against it.  But those prior matters and settlements have been woefully inadequate.

The National Music Publishers’ Association (NMPA) previously raised these issues with Spotify.  The problem is that the NMPA’s membership, by market share, mostly consists of major publishing companies.  Those are in turn owned by the major record labels, and the major record labels own approximately 18 percent of Spotify.

Thus, the NMPA really has no incentive to punish Spotify for its willful infringement.  Spotify is gearing up for a Wall Street direct listing, and the major record labels stand to receive a windfall from that event.

The NMPA settled with Spotify for a negligible amount when considering the number of compositions of its members.  More importantly, the settlement with the NMPA did nothing to resolve the outstanding issues regarding failure to license or pay royalties going forward.

A class action was also filed against Spotify and recently settled.  It too was woefully inadequate.

As alleged in the complaints filed on behalf of our clients, given the number of compositions involved in the class action and after deducting for attorneys’ fees, the average payout per infringed composition is approximately $4.00.  In addition, the terms of the settlement force class members to license their works to Spotify moving forward whether they wish to do so or not.

The members cannot terminate the license even if Spotify breaches it.  Which means that Spotify will have a license in perpetuity and cannot be sued for infringement no matter its conduct.

There were numerous objections to the class action settlement, including that the terms made it tremendously difficult to opt out.  Publishers were deemed to have opted in if they did not opt out.  A hearing was held on the objections in late 2017.  As of the date of this article, the Court has not yet ruled on whether it will approve the settlement.

Finally, at the end of 2017, a Bill was introduced in the House, titled the Music Modernization Act, at the urging of the NMPA.

If passed by Congress, this bill would essentially eliminate the ability to hold Spotify liable for statutory damages for copyright infringement for any lawsuits filed after January 1, 2018.  Its stated intention is to make the rate-setting system more market based.  And one of its effects would be that the court review system for monitoring rates will be significantly changed.

There are numerous problems, however, with this Bill.

Second, the new legislation being introduced is a solution in search of a problem.  The Music Modernization Act is being lobbied for and pushed to funnel power and money into the hands of a small constituency of dominating music entities (i.e. Sony, Warner, Universal, NMPA, etc.).  In taking a moment to dissect the legislation being proposed, it exposes the goals of the lobbying group working on behalf of its limited constituency:

A. The legislation requires that all compositions be registered with the ‘Mechanical Licensing Collective’ in order to be eligible to collect and earn mechanicals royalties.

This requirement is basically a mechanism to steal from the uninformed.  In addition, this new Musical Works Database of information would be outdated within a micro-second of coming into existence as there are between 125,000 to 200,000 new recordings being distributed into the US market every month by self-published songwriters (i.e., they control all of their own rights worldwide).  Note that this sector of “do it yourself” musicians and songwriters have the fastest growing market share by revenue, while the major music publishers’ market share declines.

B. This requirement preys on ignorance and makes little sense until one considers the second part of the legislation.

Digital Service Providers (DSPs) would be protected from infringement and statutory damages for any compositions not registered with the Musical Works Database.

As there is already a requirement to register with the US Copyright Office in order to be eligible to earn and collect mechanical royalties for compulsory licenses, and/or pursue statutory damages, it represents a needlessly massive concession with no purpose beyond trying to entice the DSPs to sign on.

C. The Mechanical Licensing Collective would create the Musical Works Database and a board of directors would oversee it.

The saying “we must study the past to learn from it and not repeat the same mistakes,” applies here.  The major music publishers created and supported the NMPA, a trade organization representing the interests of its constituency.  The NMPA, with the major music publishers, also created the Harry Fox Agency (HFA), which, amongst other things, consolidates composition data primarily from NMPA members, issues mechanical licenses, assures the members were being paid all their earned mechanical royalties and, from time to time, creates and enters into settlements on behalf of its members.

Spotify, which used HFA, failed miserably in identifying and licensing musical compositions appearing on the Spotify site. Now, after selling HFA, the NMPA wants to do the exact same thing again by creating a collective that is responsible for consolidating composition data, issuing mechanical licenses and being responsible for the payment of mechanicals.

D. The Board members of the new organization will in all practicality be controlled by the NMPA.

The entity being created will be stocked with the NMPA and its members.  They would be tasked with making decisions not just for themselves but all the other music publishers in the world that are not members of their organization.

E. The major music publishers could choose NOT to use this new entity for licensing and collecting, but still participate and take a piece of the “black box” money (i.e. other entities money), while songwriters lose control of their creative work.

Under this new proposed legislation, unclaimed money goes into a black box.  It then gets disbursed to publishers based on market share after a period of time if not claimed.  This clearly benefits the major music publishers, and penalizes the smaller songwriters/publishers and the uninformed.

There is one underlying principle being pushed, which is the basis for the introduction of this new legislation: intellectual property should be as easy to use and license as possible for technology companies to achieve their business goals.  And they should be able to do so with limited-to-no infringement damages.

In other words, technology companies are lobbying Congress to create laws to turn the creative community into workers whose own musical creations are not in fact their own.  These works can be taken and used however these technology companies deem appropriate with no recourse.  The artist no longer has control of his/her work.  They are instead exploited labor reduced to second-class citizens with less constitutional protection, freedom and choice than others within our society.

Finally, there is little need for this legislation.

The existing licensing rules and regulations work.  The infringement, non-compliance and lack of payments to music publishers and songwriters is occurring due to the (DSPs) willfully choosing to ignore them.

As a first example, the DSPs claim that the required information for compositions is not obtainable and does not exist.  This is simply a false statement.  If you ask a publisher, such as Sony/ATV, or self-published songwriter, such as Bob Gaudio, what songs they publish and/or wrote, and what percentage they control of each song, they are not only able to tell you, but they can also provide an electronic computer output with all the information (e.g., songwriter, publisher, composition name, percentage controlled etc.).  In this example, the true problem is not that the composition data does not exist, but that the DSPs never asked for it.  And they built no systems to take and use it.

The DSPs also claim that for some sound recordings they do not know who wrote the composition, making it therefore impossible to obtain a license and be compliant with regulations.  However, this too is a false statement.  The U.S. Government set up a mechanism for this exact situation.  This mechanism allows the DSP to obtain a license to and make payments for the composition —  even when they are not able to identify the songwriters and publishers.

It will be interesting to see how this legislation develops and whether it passes.  But the Music Modernization Act is not about fairness.

It seems to be a direct response, at least in part, to the willful infringement by Spotify.  It’s an attempt to insulate Spotify (and the major record labels who own it), from infringement liability, while once again enriching the major music publishers.

Richard Busch is the head of the entertainment and intellectual property section of King & Ballow.