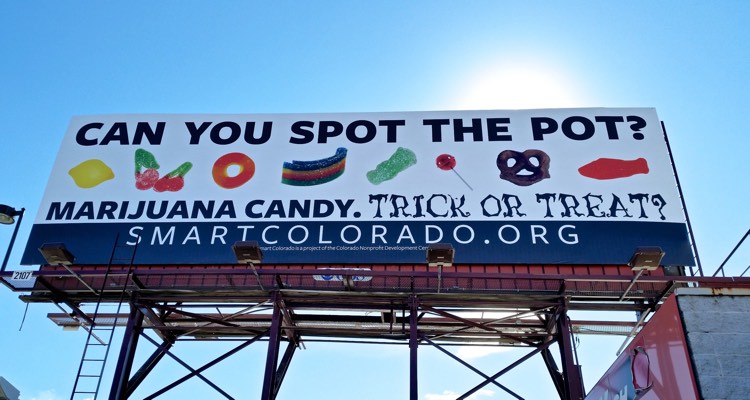 A billboard from ‘Smart Colorado,’ one of several groups opposed to marijuana legalization.

Last month, we were surprised to learn that Coachella was banning marijuana despite California legalization.  Now, we think we’ve figured out why.

Smoking weed and music festivals going hand-in-hand, except at Coachella.  Despite statewide legalization of marijuana in California, Coachella decided to continue banning pot.

“Sorry bro,” the festival explains on its FAQ page.  “Medical marijuana cards are not valid at the Coachella Music and Arts Festival. Even in 2017 and beyond. If that changes so will this answer.”

Initially, we tied the ban to Coachella’s host city of Indio, which adopted stricter rules on legalized marijuana usage.  Indio decided to ban marijuana dispensaries and related businesses, but under California law, smoking marijuana on private property (like the Empire Polo Club, where the event is hosted) is legal.

Now, it looks like there’s a better explanation: the owner of Coachella itself.

According to some investigatory work done by Freedom Leaf, Coachella owner Philip Anschutz donated $200,000 to anti-marijuana causes in 2016.  The money was funneled to anti-pot organizations in Colorado, a state that famously legalized the substance.

AEG also controls Coachella, which is one of the most popular music festivals in the world.  All of which means that whatever Philip Anschutz says — goes.

“According to its tax returns, in 2016, the Anschutz Foundation donated $50,000 to SAM Inc., and another $110,000 to its partner organization, Smart Colorado. It gave another $50,000 to Smart Colorado in 2015. The goal was to counter the impact of Amendment 64, the recreational-marijuana legalization initiative the state’s voters passed in 2012.”

Meanwhile, Anschutz is on the defensive for donating hundreds of thousands to anti-LGBTQ causes.

That’s just one part of a donation tree that is riling Coachella attendees.  Other Anschutz donations include money for a ‘birther’ politician who blasted Obama as ‘not an American,’ among other suspect causes

Just recently, the events scion blasted the attacks as ‘fake news,’ while claiming not to be aware of the anti-LGBTQ platforms of numerous organizations he supported.

“Recent claims published in the media that I am anti-LGBTQ are nothing more than fake news — it is all garbage,” Anschutz complained.  “Neither I nor the Foundation fund any organization with the purpose or expectation that it would finance anti-LGBTQ initiatives.”

Those claims were met with extreme skepticism, especially given that more donations quickly surfaced.  The post-denial donations were from 2016 — so maybe those were called off, or maybe not.

So far, the controversies are having little impact on Coachella attendance.  This year, the double-weekend event quickly sold-out — as usual — and people seem fine with the marijuana ban.  The question is whether that sentiment continues in future years, especially as more tax filings come to light.