Twitter Turns a Profit for the First Time Ever — Thank You Donald Trump? 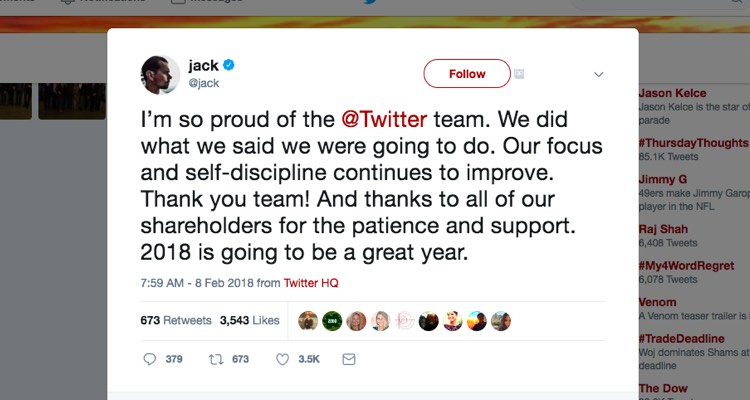 Two years ago, Twitter was shrinking.  This year, Twitter actually gained users and reached profitability for the first time in its history.  Is Donald Trump the difference?

It’s a big fat wart on an increasingly ugly internet.  But this quarter, Twitter did the unimaginable: it actually made a profit.  Not only that, the micro-blogging platform also increased revenues while boosting total users.

Perhaps that last part is most stunning.  As recently as two years ago, Twitter was losing users and social media relevance.  But this past year, Twitter actually gained users.

That sounds like the company’s long-running pitch, which always seemed lacking.  Twitter’s always been this unmanageable avalanche of information, and its piece of online advertising has always been small.  But Dorsey specifically pointed to stronger advertising during the holiday fourth quarter.  That apparently made all the difference.

Accordingly, Twitter posted a surprisingly strong profit, at least consider expectations. For the last three months of 2017, the network reported $91 million in gains, compared to losses of $167 million in 2016.

In the US, users actually dropped 1 million to 68 million, though the broader gain is notable.  That represents a surprising reversal, though it remains unclear whether those gains are sustainable.  And part of the reason is the elephant in the room: Donald Trump.

Indeed, 2017 was unlike any other year, and Twitter was typically at the forefront of the chaos.  The site played host to innumerable Trump tweets — some decipherable, some incendiary, some sensible, others brink-of-WWIII-ish.  Over time, many users started tuning out, but Twitter’s mega-tweeter undoubtedly drove greater traffic to the site.

And one year later, Trump is still Twitter- blasting, and courting a massive audience of nearly 50 million followers.  His tweets remain a flurry, and much longer thanks to the platform’s expanded character limit.

Exactly how Trump played into the bigger picture is hard to pick apart.

Though it’s hard to imagine Twitter growing without Trump’s endless short-burst tirades.  No Twitter celebrity has ever driven as much attention to the platform, even if those users are starting to tune out.

All of which raises the distinct possibility that 2018 becomes another money-loser.  As America gets inured to the Twitterer-in-Chief, they’re becoming less interested in following his every word.  And that means fewer users, less engagement, and few advertising dollars.

But let’s see how this goes.