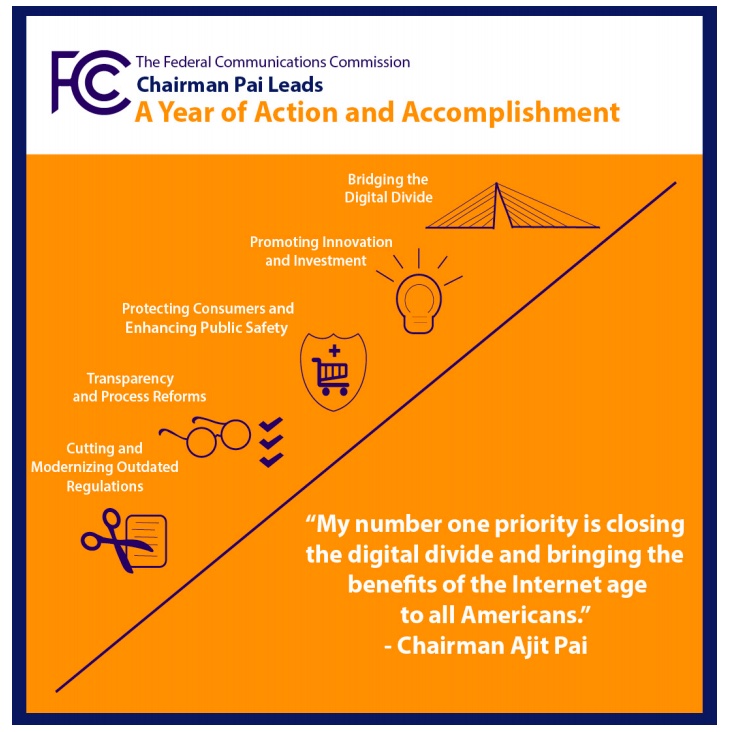 Looks like FCC chairman Ajit Pai is killin’ it in 2018!

(Source: a just-released report from the FCC).

Despite fomenting an all-out civil war among the U.S. States over net neutrality, the Federal Communications Commission (FCC) is already patting itself on the back on a job well done.

Actually, one of the people arguing that is Mignon Clyburn, from the FCC itself.

The report is largely a list of accomplishments by the FCC, peppered with self-congratulatory comments by Chairman Ajit Pai.

We’re not sure who else received a copy of this PDF ‘report card’.  Though we’ve included it below if you want to check it out.

The multi-page self-assessment appears to be the second document of its type this month.  Last week, we received another report pointing to the positive impact the FCC was having on broadband infrastructure, thanks to the relaxation of net neutrality laws.

That was hammered home again in this report, with Pai reiterating his commitment to ‘light touch’ regulation. Here’s the quote that appears under the report section titled ‘Promoting Innovation and Investment’.

“In the United States, we are in the process of returning to the light-touch approach to regulation that produced tremendous investment and innovation throughout our entire Internet ecosystem — from the core of our networks to providers at the edge.”  – FCC Chairman Ajit Pai

Accordingly, here’s how the FCC characterizes its net neutrality rollback.  It almost reads like a to-do list, with this listed as the first accomplishment.  The FCC’s rollback was officially initiated in December of 2017 amidst heavy protest (and questionable comments on the FCC site itself).

Meanwhile, it’s unclear if ISPs themselves will be able to enjoy the FCC’s handout.  And a major reason is that U.S. states are aggressively pushing back, and forcing ISPs to adhere to net neutrality provisions — or face fines or expulsion.  That could make it it nearly impossible for ISPs like Verizon and Comcast to ditch net neutrality, especially given the serious costs associated with constructing state-by-state, patchwork provisions relating to net neutrality compliance.