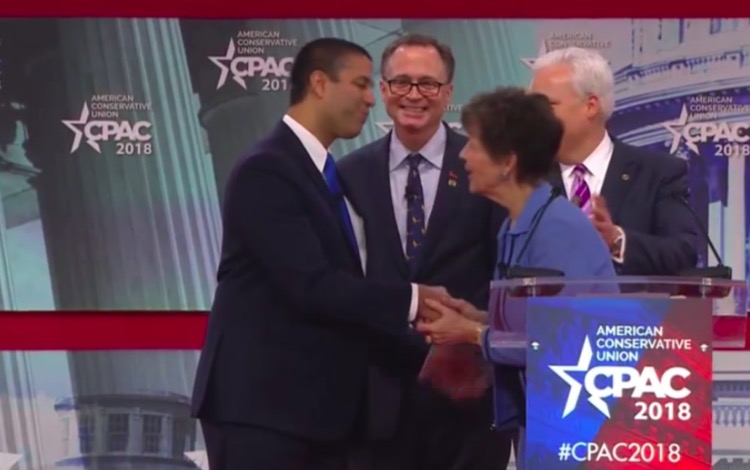 Trump-appointed FCC Chairman Ajit Pai is now handing back a valuable, handmade musket awarded to him by the NRA.  The high-priced gift was likely to provoke a criminal investigation related to ethics and bribery violations.

It was a love-fest between two seemingly unrelated groups: the National Rifle Association (NRA) and the Federal Communications Commission (FCC).  At the recently-held Conservative Political Action Conference (CPAC) in Maryland, the controversial gun-rights group bequeathed FCC chairman Ajit Pai with a handcrafted musket.

That musket, an extremely valuable Kentucky Long Gun, was given alongside one of the NRA’s highest honors: the ‘Charlton Heston Courage Under Fire’ award.  Heston, a longtime advocate for unfettered gun ownership rights, is a demi-god within the NRA.

“Ajit Pai is the most courageous, heroic person that I know,” remarked Dan Schneider, the executive director of the American Conservative Union (ACU).  “He has received countless death threats. His property has been invaded by the George Soros crowd. He has a family, and his family has been abused in different ways. Chairman Pai, thank you for everything you’ve done.”

One problem with the gift is that the prized musket is easily worth more than $200.

According to federal law, any gift exceeding $200 to a public official is illegal if it comes from a group that stands to benefit from rules administered by that official.

And it turns out that the NRA actually cares about net neutrality.  In fact, they actively lobbied and spent money to help dismantle net neutrality, which is exactly what Pai did.

Lobbying is legal, as long as federal regulations are obeyed.  Bribery, on the other hand, is illegal, which is exactly what comes into play for items exceeding the $200 threshold.

In fact, less than 24 hours after the weapon was awarded to Pai, discussions were underway to launch an investigation into this (and other) ethics violations potentially committed by the FCC at CPAC.

And there’s another strange detail in this story.  During the awards presentation, the NRA’s Carolyn Meadows stated that the musket would be housed within the NRA’s National Firearms Museum until Pai could collect his prize.  That means that the NRA may have been planning to transfer the valuable possession to Pai after he left the FCC.  Which is even more illegal.

Sniffing serious problems ahead, Ajit Pai is now forcefully handing back the gift.

In fact, he plans to never accept the weapon, even after his tenure ends at the FCC.  In a letter to the NRA obtained by Politico, Pai firmly returned the gift.  “As you know, once my staff became aware of what was happening, they asked backstage that the musket not be presented to me to ensure that this could be first discussed with and vetted by career ethics attorneys in the FCC’s Office of General Counsel,” Pai backtracked.

“Therefore, upon their counsel, I must respectfully decline the award.  I have also been advised by the FCC’s career ethics attorneys that I would not be able to accept the award upon my departure from government service.”

Sadly, Pai needed to consult multiple ‘career ethics attorneys’ to figure out that receiving a gift under such circumstances is illegal.

It’s questionable whether Pai’s ‘backstage story’ is accurate.  For starters, CPAC may have had a regulation against bringing firearms on-stage.  But the backspin implies that Pai never accepted the gift in the first place, which further fends off an ethics charge.

Either way, this Kentucky bullet now looks dodged, though a few other ethics violations remain.  That includes serious allegations of impropriety involving Sinclair Broadcasting, which was handed a juicy rules change by Pai.  Leading up to that change were a series of suspicious meetings between Sinclair executives and Pai.  At this stage, we’re not clear exactly what was discussed in those meetings.

And then there’s the matter of fellow FCC Commission Michael O’Rielly.  Also at CPAC, O’Rielly publicly endorsed Donald Trump, which is also illegal for any public official.