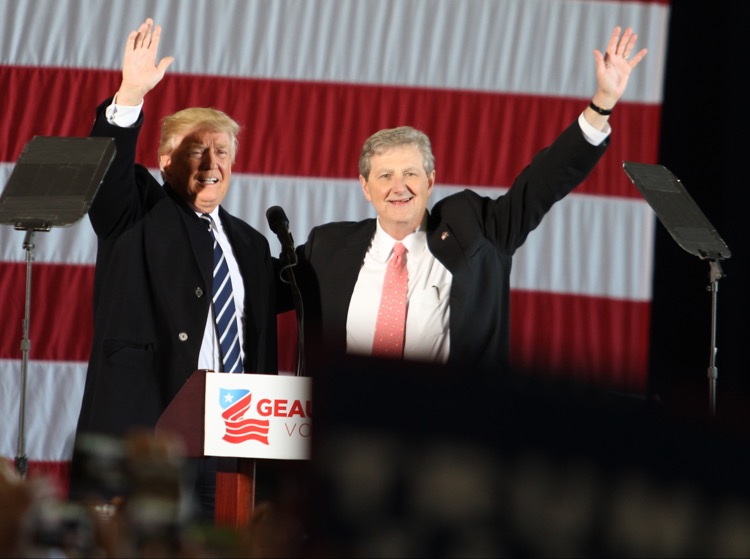 GOP Senator John Kennedy has now introduced a bill designed to fortify the FCC’s recent repeal of net neutrality.  The measure would ban U.S. states like Washington from creating their own net neutrality laws.

It’s hard to tell if the original John F. Kennedy would have approved of this measure.  But Louisiana Republican Senator John Kennedy has now introduced a bill designed to reinforce the FCC’s recent rollback of 2015 net neutrality laws.

That includes a complete ‘preemption’ of state laws on net neutrality.

A copy of Kennedy’s bill, S.2510, has not been released.  But the following brief summary has been issued.  The summary notes that the bill acts to ‘preempt State law with respect to Internet openness obligations’:

“A bill to amend the Communications Act of 1934 to ensure Internet openness, to prohibit blocking of lawful content, applications, services, and non-harmful devices, to prohibit impairment or degradation of lawful Internet traffic, to limit the authority of the Federal Communications Commission and to preempt State law with respect to Internet openness obligations, to provide that broadband Internet access service shall be considered to be an information service, and for other purposes.”

The earlier House bill was introduced by Representative Marsha Blackburn (R-Tenn.), who heralded the measure as a step forward for the internet.  “We have a bill, the Open Internet Preservation Act,” Blackburn declared in December.  “We can do this now that [FCC] Chairman [Ajit] Pai has done his job of getting the net neutrality laws off the books.”

‘‘(c) PREEMPTION OF STATE LAW.—No State or political subdivision of a State shall adopt, maintain, enforce, or impose or continue in effect any law, rule, regulation, duty, requirement, standard, or other provision having the force and effect of law relating to or with respect to internet openness obligations for provision of broadband internet access service.”

Both measures are part of a growing clash between states and the FCC.  Just recently, Washington became the first U.S. state to pass a net neutrality law, and Oregon is not far behind.  California is also expected to pass a law protecting net neutrality, with fast-moving legislation now in the state Senate.

Confusingly, both the Senate and House bills prevent ISPs from blocking or throttling traffic.

But it makes it perfectly to create paid fast lanes, which by default means that non-paying sites are slowed.   That contradiction has caused many to deride the measures at ‘fake net neutrality bills,’ while accusing both Kennedy and Blackburn of pretending to clamp down on ISPs.

Closer the reality, the pro-FCC measures seem to masquerade as ‘tough bills,’ but simply prevent extreme actions like outright site blocking while containing highly-contradictory language on throttling.  “Some cable companies and content providers aren’t going to be happy with this bill because it prohibits them from blocking and throttling web content,” Kennedy claimed.  “This bill strikes a compromise that benefits the consumer.”

The bill actually makes it pretty easy for ISPs to construct a workaround.  Engadget writer John Fingas points out that ISPs like Comcast can easily make their default speed slower, and increase that speed for sites that pay.  “Theoretically, ISPs could create de facto ‘slow lanes’ for competing services by offering mediocre speeds unless they pay for faster connections,” Fingas points out.

Tellingly, Senator Kennedy declined to participate in an effort to trigger the Congressional Review Act on the FCC’s repeal.  Kennedy’s participation would override a current tie, and offer a serious challenge to the repeal.  Kennedy said he considered joining that effort, but ultimately introduced the pro-FCC bill.