A Map of the Net Neutrality Resistance 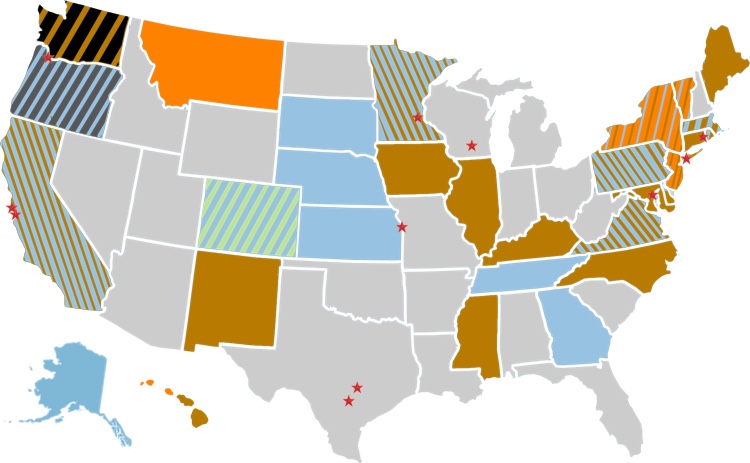 A majority of U.S. states are now actively protesting the repeal of net neutrality, in one form or another.

(A larger version of this map can be viewed here, or simply by clicking the map above.  This is based on all of the information we’ve compiled, but things are changing daily.  So if you have any updates or corrections, please let us know in the comments below or by emailing us at [email protected])

Here’s a breakdown of every level of net neutrality pushback, and the states that are employing them.  Please note that several states are using multiple methods to combat the FCC — for those, we’ve just used stripes to signify the multiple types.

In some states, like California, those bills are highly likely to become law.  As of March 15th, California has a net neutrality bill that successfully passed the House, and a Senate bill that is regarded as the toughest proposed state bill yet.

Light Green = voters in 100+ municipalities have authorized the creation of taxpayer-funded, municipal ISPs.

More than 114 municipalities in Colorado have voted to allow taxpayer-funded ISPs.  Some municipalities, like Fort Collins, CO, have successfully created their own networks with net neutrality protected and drastically lower pricing.

Red Star: City mayor has pledged not to do business with any company disobeying net neutrality (Mayors for Net Neutrality Coalition)

Already, 12 different mayors have joined this cause (more on that here).

Also, thanks to Fight for the Future for helping us track specific state bills.  Please check back for continued updates.