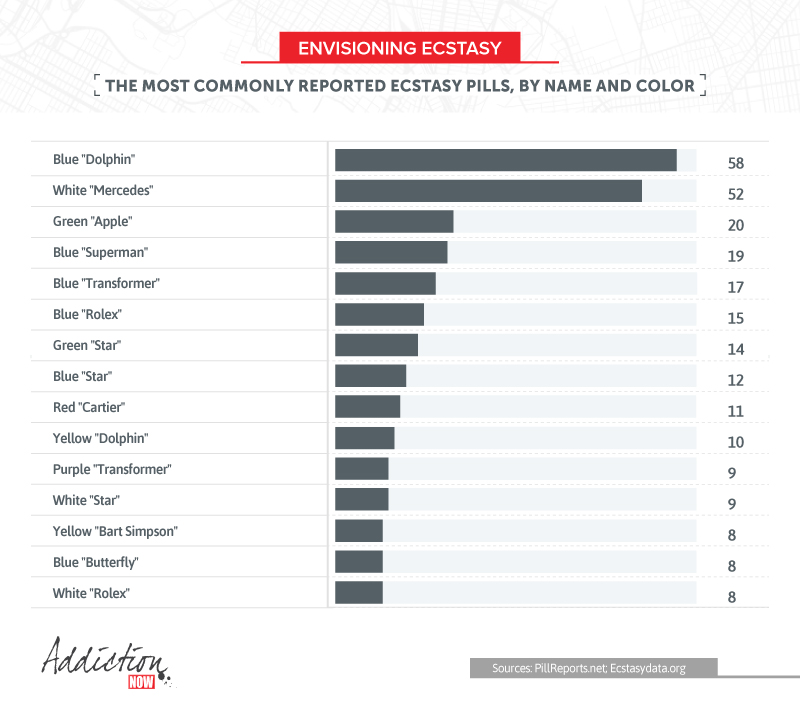 Blue Dolphin Pill. White Mercedes. Green Star. Purple Transformer. White Rolex.  These are just some of the ecstasy pills festivalgoers are popping in excess this year.

With the concert season well underway, Addiction Now decided to take a closer look at ecstasy use.  Across the board, the group analyzed over 8,000 crowdsourced reports submitted to PillReports.net and EcstasyData.org, with the Blue Dolphin Pill topping the list.

In these forums, drug users readily described the appearance and effects of MDMA pills, or ecstasy, they’ve purchased.  Sharing this information with Digital Music News, the organization has uncovered the most popular varieties of ecstasy.

Around the world, the most prevalent ecstasy pill was blue and stamped with a dolphin emblem — the ‘Blue Dolphin Pill’.

Dubbed the Blue Dolphin Pill, it also has a spinoff:  the Yellow Dolphin.

And what about the U.S.?

Unlike the rest of the world, the Blue Dolphin didn’t take the top spot in the United States.  The pill only had a 17% report rate, and only appeared in the Pacific Northwest and the Deep South.

The Blue Superman took second place, with 52% of all reports coming from the Pacific Northwest, the West, Midwest, and South.  The Green Apple pill had a 45% domestic report share, mainly used in Los Angeles, San Francisco, and major cities in the South, the Midwest, and Massachusetts. 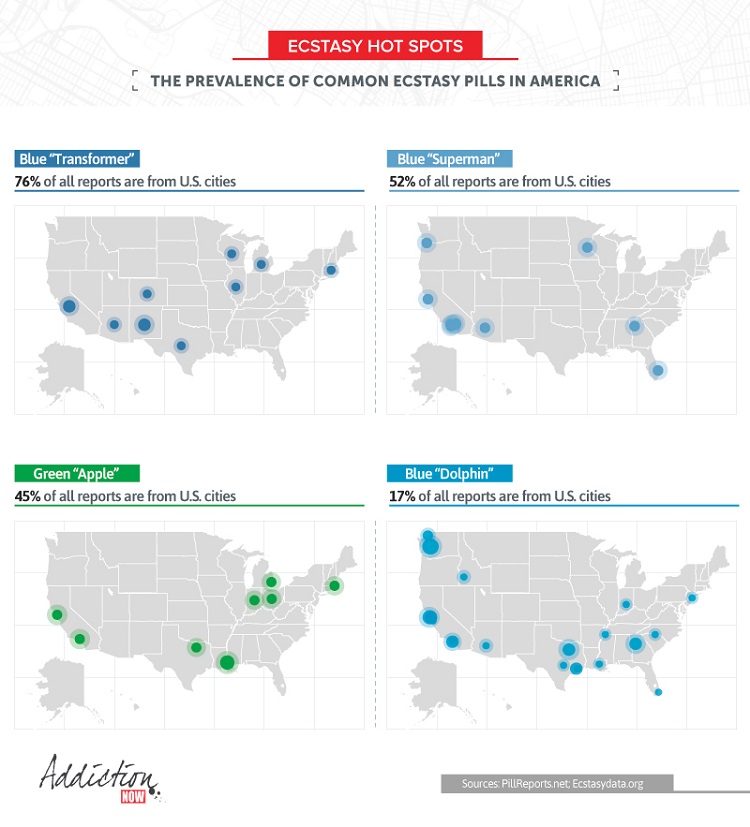 (For those who haven’t check it out, Breaking Bad tracks a struggling New Mexico high school teacher diagnosed with lung cancer.  With the help of a former student, he produces and sells blue crystallized methamphetamine.  And the rest is a pretty great binge.)

In the organization’s findings, the Blue Transformer soon appeared in Arizona and California by the end of that year.  It quickly spread to Illinois, Colorado, and Michigan.

After ending up in Massachusetts, the dangerous pill abruptly dropped off the map.  It recently emerged in Texas in July 2017.  Just a month earlier, federal agents had seized thousands of Blue Transformer pills in Las Vegas.

Ecstasy pills with the Man of Steel’s emblem first appeared in Florida 14 years ago.  After jumping to Georgia, it quickly moved out west to California in 2008.  Prior to moving on to the rest of the world, its domestic activity appears to have stopped altogether in 2011.

Last October, 11 teens in Australia overdosed on the Blue Superman pills.  As the Sydney Morning Herald reported, the ecstasy pills shaped with the recognized Superman logo may not contain MDMA.

While the victims survived, their British counterparts weren’t so fortunate: the pills caused the death of four teens in England.

Don’t take a bite of this apple.

The popular Green Apple ecstasy pill first appeared in Detroit in 2004.  The following year, it shifted to Rhode Island and Indiana before making its way down to Texas and California. It last appeared domestically in 2012 in Ohio.

The drug gained notoriety in the UK after two Welsh teens consumed the Green Apple, causing one to die.  In 2014, federal authorities attributed the deaths of two people in Ireland to these pills.

Unlike the other popular MDMA pills in this list, the Blue Dolphin Pill has an extensive history in the US.  First appearing in Seattle in 2002, it quickly gained a foothold in California, Washington, Idaho, Texas, Georgina, and Indiana.

Tracking how drugs move across regions, Addiction Now analyzed the Blue Dolphin’s appearances in California.  After it moved from Seattle to Pasadena, it later appeared in San Francisco and Oakland that same day.  Exactly two weeks later, the drug shifted to San Jose.

During this period, ecstasy use skyrocketed in the United States.  The Partnership for a Drug-Free America reported a 71% increase from just two years prior.

For more information on this report, as well as additional resources, you can check out Addiction Now’s website here.