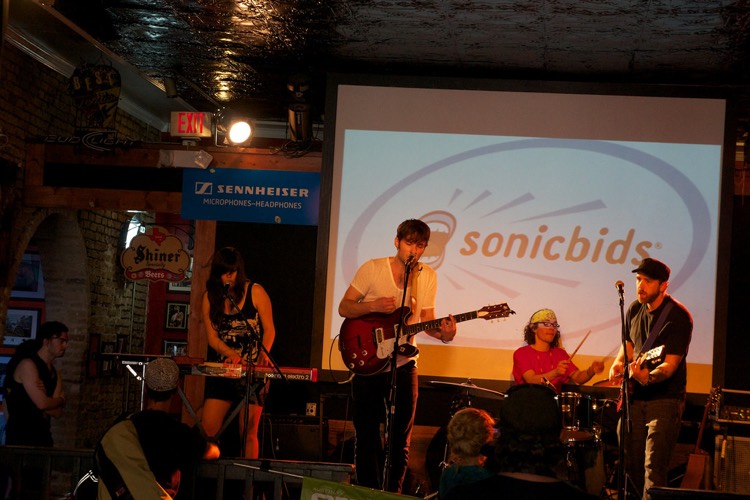 The Mugwumps play a successful SXSW showcase. ‘We got signed right there’.

It’s easier than you think to become famous — and very wealthy — at SXSW.

A lot of bands think it’s easy to become extremely famous and successful after playing a few showcases at SXSW.  Well, it turns out they’re right — but it’s actually even easier than they realize.

Of course, there are probably dozens of bands that have become instantly famous and extremely wealthy since playing SXSW last month.  It’s really hard to keep track of all of the overnight success stories.  But it turns out that the biggest challenge isn’t becoming famous at SXSW — it’s knowing how to manage all of the instant fame and massive success that usually follows a single performance.

That’s now a major challenge for the Mugwumps, a previously unknown band from the greater Sandusky metropolitan area.  Of course, we all know the Mugwumps after their showcase at Half Step on Rainey on March 23rd in Austin, TX.  But just days before their SXSW performance, The Mugwumps were relatively unknown outside a core group of roughly 13 on-and-off fans.

I know, hard to believe.  And it all started with an extremely original idea that thousands of other bands somehow didn’t consider: playing at SXSW.

It’s hard to say when the light bulb went off for the Mugwumps.  But faced with an extremely tepid response from local Sandusky fans, Mugwumps singer David Rutherford knew it was time to do something completely original.  “Let’s use the $14,365 left on my credit card and play SXSW,” Rutherford radically proposed.

The winning idea made so much sense, the band started packing immediately.  Strangely, airfare to Austin was triple the price, renting a van was quadruple the going rate, and the Econo Lodge 9 miles outside of downtown Austin was $900 a night.  But that only served the further validate the winning idea.   According to Rutherford, this investment was more obvious than putting $10,000 on Litecoin.

Right after paying for their Sonicbids submission, the Mugwumps started experiencing an incredible swell of interest.  Of course, SXSW accepted them within minutes of hearing their music, and put them into a marquee showcase featuring 14 bands starting at 2:30 am.

SXSW also started promoting the Mugwumps in a serious, dedicated way — because they cared.

Of course, SXSW carefully listens to all of the submissions, and were on the phone with Rutherford the next day.  “They were really interested in our music, and wanted to talk about every track,” Rutherford relayed.  “I felt like they really cared and weren’t just growing this into the biggest possible event possible while exploiting us by dangling some carrot of fame in front of our desperate noses.”

Maybe this part’s obvious, but the showcase itself was absolutely packed.  Representatives from every single label and publisher attended, plus several major brands who expressed interest.  Guess the Khalid show could wait!  By the end, there was a signing derby and a deal with Nabisco, all for just showing up!

Smartly, the Mugwumps understood a simple principle of SXSW: everyone wins!

Accordingly, it turns out that all 14 bands who played on the showcase are now completely famous.  “Guess there’s room for more than one instant SXSW success story,” Rutherford relayed.