Spotify Is About to Receive a Giant Gift from Congress. Which Might Explain Their Latest Acquisition. 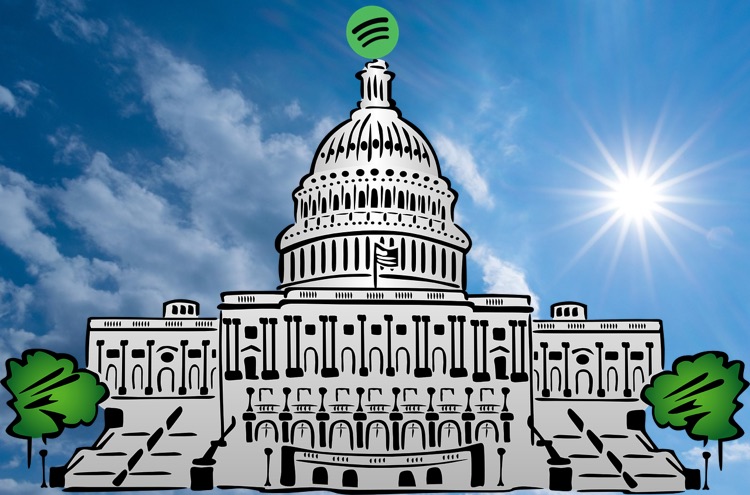 The Music Modernization Act (MMA) will forgive Spotify for years of bad behavior.  Ahead of its passage, the company is already moving forward with some post-MMA acquisition plans.

Spotify’s ‘non-IPO’ came with a lot of complex puzzles.  For example: why is a company that has lost $3 billion — and $1.5 billion in the last year — worth $26.5 billion on Wall Street?

Smart analysts like Peter Kafka pointed to a paid subscriber base of 71 million.  That’s something that even mega-media companies like Disney have trouble attaining.  Others recognized that Spotify is at the forefront of where music is going, and potentially building a pie that’s big enough for multiple elephants to enjoy (like Apple, Amazon, and Google).

But there’s another big reason: U.S. Congress.  The Music Modernization Act is now fast-tracking through the House, and is likely to get passed quickly.  It’s a great bill on many fronts, and the decision to consolidate numerous other bills into a ‘mega-bill’ defies gridlock.

Just how fast is this fast-track?  Just moments after we broke the story that a super-sized ‘mega-bill’ was being voted within the House Judiciary, we also found out that it passed.  By a margin of 32-0.  After years of lobbying ineptitude, the music industry is finally getting something done.

+ A Supersized Music Modernization ‘Mega-Act’ Is Being Introduced Into Congress

Just one problem: music publishers will lose their right to sue Spotify for infringements that occurred in the past.

That’s right: the MMA closes the door to all litigation against Spotify related to unpaid mechanical licenses.  We’re talking billions of dollars in damages here, money that publishers will not be able to sue Spotify to recover.

Even more advantageous to Spotify: the cut-off date for lawsuits is actually in the past: January 1st, 2018.

That explains why Wixen Music Publishing launched a lawsuit for $1.6 billion against Spotify — right after Christmas of 2017.  Wixen realized that when the MMA passes both chambers and becomes law, their claim to past infringements become null & void.

Other publishers couldn’t react quickly enough, if they even realized the fine print before January 1st.  But hey: sometimes you gotta play dirty.

+ A Federal Judge Asks Spotify: ‘How Many Songs Have You Infringed, Anyway?’

Richard Busch, arguably one of the most feared attorneys in the music industry, told Digital Music News that this is all pretty ridiculous.  If not outright unconstitutional.  The reason is that an infringement liability is based upon the date when the infraction occurred, not the date that a plaintiff ultimately litigates.

New laws replace old ones.  But can they erase liability prior to the new law being enacted?

But if this eliminates billions in past damages, why don’t big publishers like Sony/ATV and Warner/Chappell care?  The reason is that they’ve already settled their beef with Spotify.  The NMPA (their organization and D.C. bulldog) already took care of this problem and got their members paid.

The indie publishers like Wixen?  They’re on their own.

In this context, the acquisition of Loudr for untold millions makes perfect sense.  The MMA calls for a brand-new collective to manage mechanical rights payments, and distribute them.  Loudr specializes in mechanical licensing, with a team specialized in this super-specialized license.

“Spotify is proud to announce that Loudr has joined the Spotify family,” the company emailed DMN this morning.  “The company was founded in 2013 to build products and services that make it easy for content creators, aggregators and digital music services to identify, track and pay royalties to music publishers.”

In the name of progress!

On the flip side, this also means that a huge cloud of licensing confusion is getting cleared up for countless other streaming music companies.  And, investors who have been hiding on the sidelines of music tech.  And there’s an argument for legislating past a license that was designed for ‘mechanical’ fixtures into physical media like LPs and CDs.

It moves the vehicle forward in many respects.  Just with indie artists and publishers left as the roadkill.

Written while listening to Sadiva.