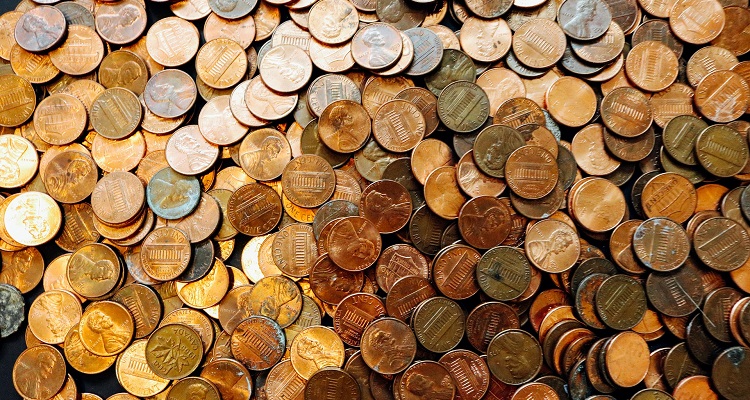 Napster, Tidal, Apple Music, and Amazon still have the highest per-play rates.  And don’t expect to make much on Pandora, Spotify, and YouTube.

How much should artists expect to receive on streaming music platforms?  That’s a complicated question.

Last year, Digital Music News published a list outlining the most popular streaming music platforms’ per-stream rates.  At $0.0190 and $0.0110 per play respectively, Napster and Tidal ranked as the services with the highest artist payouts.  Spotify and Pandora ranked among the worst paying platforms.

At a shockingly-low rate of $0.0006 per stream, YouTube took the last place.

Now, Statista has released its list of gross payouts to labels.  Using information from The Trichodist, they listed each major service’s per-stream rate. 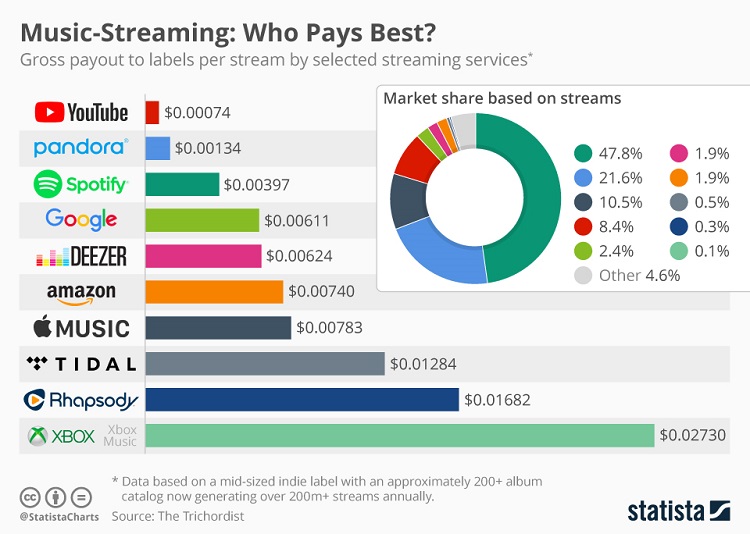 Oh, what could’ve been, Microsoft…

Microsoft’s service, labeled as Xbox Music here, paid $0.02730 to artists.  The company had announced late last year that it would exit the streaming music market.  Users could transfer their favorite playlists to Spotify.

Napster/Rhapsody may not rank as one of the services with the highest subscription numbers.  Last year, it reportedly had around 4.5 million subscribers.  According to the Trichordist, the streaming music service only had a 1.75% market share in the US.  Napster reportedly pays out $0.01682 per stream.

The Garden of Eden of Apple.

HomePod sales aren’t doing so hot.  Why?  Well, besides the absurdly-high asking price, users can only stream from Apple Music.  You can stream from multiple streaming platforms on the much cheaper Amazon Echo and Echo Dot.  Yet, the HomePod’s closed streaming ecosystem may actually prove beneficial for artists.  Apple Music pays $0.00783 per play.

Tens of millions of users.  Yet, just pennies per play.

Right behind Apple Music, Amazon’s own streaming platforms, Prime Music and Music Unlimited, now sport “tens of millions of consumers.”  That may partially explain the company’s slightly higher payouts.  Artists should expect to receive $0.00740 for each stream played on the platforms.

Focusing on over 180 markets, Deezer doesn’t exactly have a strong presence in the US.  Yet, the French-based service now pays out $0.00624 per stream.

Among the largest music platforms, Google Play Music had the highest payouts.  Artists reportedly earned $0.0179 per stream.  Yet, it now stands at $0.00611.

A successful direct listing on the New York Stock Exchange.  A not-so-successful platform for artist payouts.

Spotify now has 71 million subscribers, 3,500 employees, and over 35 million tracks on its platform.  Its direct listing on the New York Stock Exchange has gone well.  Yet, why is this platform just two spaces above YouTube?  Spotify reportedly pays $0.00397 per stream.

Still alive, but not exactly kicking.

Here at Digital Music News, we’ve documented Pandora Radio’s slow descent into obscurity.  Last year, the service paid $0.00134 per streams.  Artists this year should now expect to receive $0.00134 per play. That is, until the service likely kicks the bucket, maybe even this year.

Please, don’t even think about building a career on: YouTube

This year, proving that Google won’t give up on its overly-ambitious music streaming service plans (or hilariously low payouts), the company will soon launch its third premium service on YouTube.  But, how much should artists expect?  Well, currently, YouTube pays $0.00074 per stream.  So, not much.

Our advice?  Please don’t ever make a career out of your earnings on the popular video platform.  Trust us.  You’ll regret it.