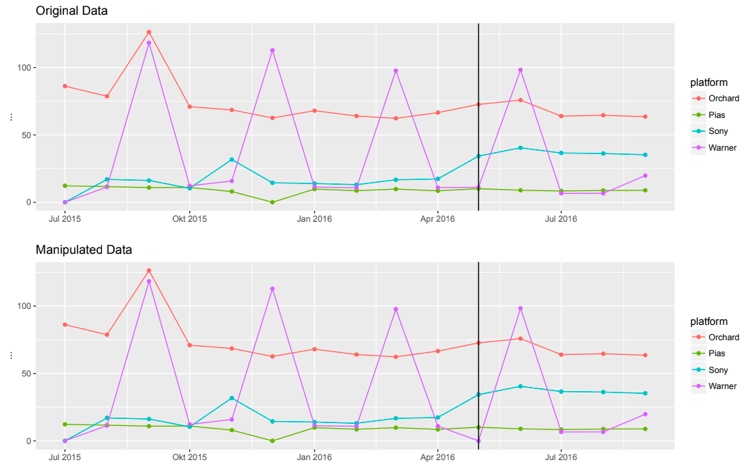 Original data vs. Manipulated data. Can you tell the difference?

Up until this point, it’s been extremely difficult to detect fraud in music royalty statements.  That’s about to change in a very serious way.

Since the early days of the music industry, there’s always been a very serious problem.  And that problem is outright fraud.  Simply stated, if a label hands an artist a statement, that artist has never had a way to investigate the veracity of the numbers reported.

Even worse: an audit against a label (or publisher, or touring company, or manager) is incredibly expensive to conduct.  For starters, the auditors themselves need hundreds of hours to properly scour a massive flow of royalty statements.  Then, those auditors (and lawyers) have to do battle with accountants and lawyers on the other side.

Those opposing accountants and lawyers are paid to make that process more difficult and expensive — and give up the least amount to the auditing artist.  It’s really hard to win — or even start the battle.

Now, the problem has compounded in complexity.

In the analog era, there were only so many things to count and report.  LPs, CDs, and other physical items like t-shirts and ticket sales comprised the limited list.  Now, labels and artists are forced to manage billions of streams, while trusting the platforms that report it.

On the publishing side, the math on public performances and mechanicals has always been incredibly complex, with entire organizations like ASCAP created just to count one license (in one country).  Now, that complexity has become arguably unmanageable, with formats like non-interactive streaming (i.e., digital radio and satellite radio) requiring entirely brand-new organizations (like SoundExchange) to keep track.

Admirably, tech-focused companies like INgrooves, Kobalt, STEM, HAAWK, Audiam, and oneRPM are developing solutions to help organize and manage this data influx.  But what if the numbers themselves are fudged?  Or, simply reported in error — because of simple human error?

Enter Austria-based Rebeat Innovation, which has now developed a fraud detection software solution to solve this issue.  The solution is currently in beta, with version 1.0 expected later this year.

It turns out that fraud is very difficult to detect.  In fact, most fraud is purposefully hidden to avoid obvious detection.

In the demo, I was presented with lots of different royalty graphs showing a variety of combined royalty data.  For example, one involved a combined graph showing Spotify, Apple Music, Google Play Music and other streaming platforms mapped against iTunes downloads.  And every spike and aberration that looked like fraud actually turned out to be legit.

In almost every case, the fraud was buried into smaller, less-detectable crevices, ones that the naked eye would never pick up.

Rebeat’s CEO, Guenter Loibl, has been managing digital music royalties for more than a decade.  His company has built massive systems to ingest, analyze, and calculate royalties from surging streaming plays.  But he told DMN that he’s never had a way to inspect the actual streams and royalty statements handed to him — even though clients were often wondering if these numbers were legit.

“In our study, we show that the analysis of the fluctuations of the proportions of these revenues over time is a highly efficient way to identify fraud.”

That led to a major, multi-year collaboration with researchers at the Vienna University of Technology (Technische Universität Wien).  The result was a massive relational dataset of billions of inputs, all thoroughly analyzed to form a comparison benchmark. 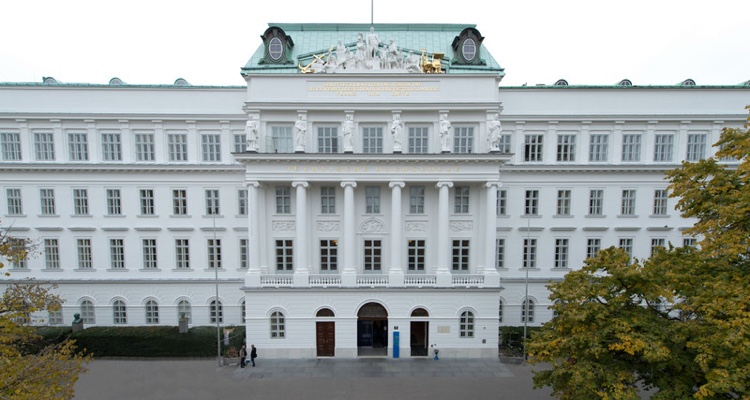 For those into data geekery, the researchers at Technische Universität Wien employ a concept called ‘Compositional Data Analysis’.

This is already a cornerstone of fraud detection solutions being deployed in other industries.  “Compositional data (CoDa) analysis has been applied in quite diverse areas such as biology, demography, ecology, economics, geology, politics, chemometrics or even sports,” the research team explained in an unpublished white paper shared with DMN.

“CoDa is applicable when the structure of the data is such that the relevant information is contained in the relations between the compositional parts.  In the digital music industry, these parts represent the revenues from different platforms for a given artist, song, or label (entity).”

Basically, when millions of data points are analyzed, the relation between those points become extremely predictable.  “In our study, we show that the analysis of the fluctuations of the proportions of these revenues over time is a highly efficient way to identify fraud,” the team continued.

“In other words, even though the total revenues for a given entity varies over time, on average in the non-fraud case the relationships (the platform proportions) stay stable.”

The results are pretty fascinating.

As mentioned, fraud detection is actually a serious discipline in other industries, so a number of interesting discoveries are transferrable here.  And lots of this stuff is candy for the tech-geek mind.

For example, if a certain number (like ‘9’) appears too many times in a statement with a certain regularity, it’s almost always fraud.  There’s such an incredibly small chance of it happening naturally.  In the world of non-fraud statements, certain numbers simply appear less frequently.

Another red flag comes from movements on one platform that aren’t accompanied by another platform.  For example, a surge in streaming on Spotify is almost always accompanied by similar movements on related platforms like Apple Music and Amazon.  If there’s a Spotify exclusive, then a big disparity is explainable.  Otherwise, it’s probably doctored data.

And by the way: labels, publishers, and venues aren’t always the ones committing the fraud here.

In many cases, artists themselves are buying fake streams or purchasing huge amounts of their own music on iTunes.  ‘Playlist payola’ is another emerging fraud, with Spotify one giant target.  All scams that get detected within two seconds using this software.

Ultimately, Rebeat Innovation estimates that their fraud detection solution will carry a 94-5% accuracy of detection rate.  Over time, that percentage will climb much higher.  But there’s still some work to be done.

At this stage, Loibl says that the software can detect ‘irregularities,’ or aberrations that require further investigation.  It could be fraud, or simply an unexplained surge.  In one case, for example, the system triggered an alert based on a calendar-counting disparity involving iTunes.  One service was counting February one way, another service was tracking it differently — but no fraud.  It’s just another aberration that the system needs to learn.

Rebeat is planning to release its first iteration for recordings later this year.  Then, it’s on to solutions for publishing royalties and potentially other areas.

Already, this is incredibly valuable.  That’s because in current auditing processes, forensic investigators are typically looking for signs of fraud, then digging deeper.  So irregularity checks already address the first step.

In the future, Rebeat envisions an industry in which every statement can be checked for fraud.  Effectively, this could spell the end to doctored, dirty statements.

Usually, when I hear bigger claims like these from entrepreneurs, I roll my eyes.  But in this case, I could actually see this technology making the music industry a better place.  And just like cameras in a bank, the presence of this technology will reduce fraud before it begins.

Right now, discussions are already happening with a few major partners.  But down the road, it’s easy to imagine that a large group of labels, distributors, publishers, and management groups will use the system to vet every statement received.  You could even ‘fraud-check’ statements with a monthly subscription.

But before that happens, I can also imagine a few lawyers who might want to employ this system for their clients.  Previously, fraud detection software solutions have been absent from high-profile royalty disputes.  But this could make all the difference in a multi-million dollar case.