Want to Find Band Members? Here Are 3 Ways to Find a Perfect Match 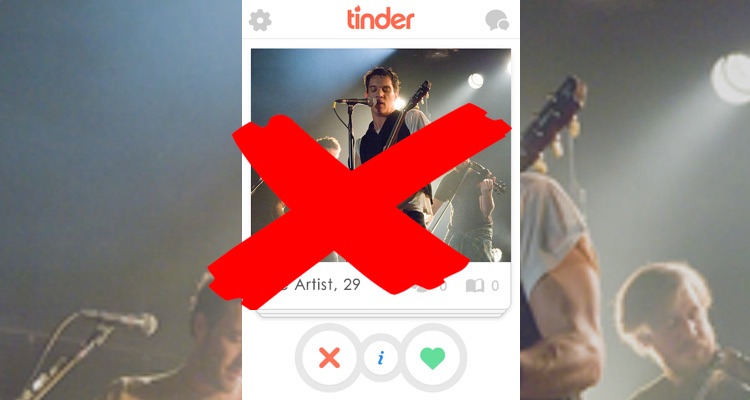 It’s difficult to find band members that are reliable and talented — in fact, this seems to be the biggest struggle for musicians looking to start up a new project.

In my experience starting up my own band, great musicians are all too often horrible band members. Bad experiences have changed the way I go about trying to find band members.

When piecing together my band, I tried everything – Craigslist, posting up flyers at universities, posting on Facebook groups, etc. Some of these worked well with some tweaking, and others failed to generate any leads, or got us too few to be worth the time.

In this article, I’m going to share with you what are, in my experience, the 3 most efficient ways to find band members.

Before you start your search, you need a demo.

Putting together a demo is an important part of finding band members because your demo gives potential band members an idea of the musical direction you want to take, and will weed out any uninterested prospects.

If you’re an instrumentalist, your demo doesn’t necessarily have to be a full song with lyrics and everything, but it does have to show what you’re capable of in terms of your own instrument.  You also don’t need to go to a studio and get something that’s completely mixed and mastered to perfection (although, if you can afford it, a better quality recording does help gain more interest).

If you play guitar or bass, for example, you can make a pretty clean demo using your own electric guitar, GarageBand, and a cable that runs from your amp’s headphone output to your computer’s USB port.

For vocals and drums, a performance video, even if it’s a cover, will do.

Once you have a demo, you’re ready to start your search for band members. Here are the 3 strategies I’ve found most effective in my search.

Craigslist has continued to be a great source of leads, but there are certain posting methods I’ve found to increase the overall effectiveness of this channel.

When I initially posted on craigslist, I’d talk about the genre of music I wanted to play, but the problem with this is genre is too subjective.  For example, if I post on Craigslist saying I want to play in or start a metal band, that can be perceived as a desire to play in a band like Slayer, Avenged Sevenfold, or A Day to Remember depending on who sees the post.

To get a larger supply of leads from craigslist that are more into the type of music I wanted to play, I did keep the genre in the title to attract a broader audience.  But instead of discussing genre in the post, I simply listed bands I’m interested in.

As an example, here’s the exact post I’ve been using on Craigslist to find vocalists for my band: 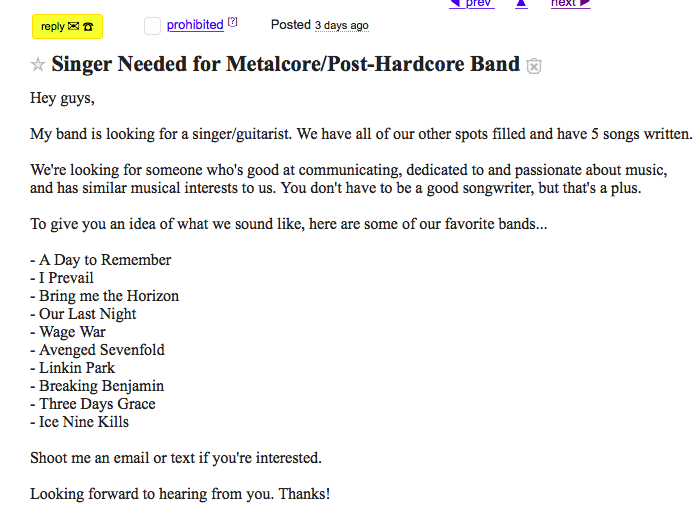 This format has generated the largest number of leads that are actually interested in the style of music my band and I are looking to play.  It eliminates some of the subjective views around a genre based post, and lists enough bands to welcome some overlapping interests and to give an idea of what musical direction our band is looking to go in.

Facebook groups that include musicians from your city are a great way to find potential band members.  You can easily find groups of musicians your city by searching Facebook for “[your city] musicians” and looking at the groups section.

In my experience, simply treating these groups like a bulletin board hasn’t worked.

When I first started, I made very passive posts that failed to engage members of the Facebook groups at all – often times, they said something along the lines of “Hey guys, my band is looking for a singer. Let me know if you’re interested, thanks!”  I’d usually include some details about what we sound like, but they pretty much all followed this format and got no results.

+ People Are Receiving Mysterious Cassette Tapes In The Mail

The problem with posts like this is that they don’t engage people at all.  Instead, forming your post in the form of a question will gather responses from other musicians much more effectively.

So instead of something similar to the post above, think of how you can change your post into a question.  Posts like “Hey guys, any vocalists looking to join a band?” will work much better than a pitch-and-thanks style post.

Reaching out to group members directly

In addition to posting in the Facebook groups I’ve been able to find, directly messaging some of the members has been a productive use of my time.  Often times, people in these groups are very open to helping their fellow musicians.

When doing this, it’s a good idea to look through the members’ profile to see if they’re into your style of music. If they are, you can reach out to them with a message like this:

“Hey [name], I saw that you were a member of [Facebook group name].
My band is looking for a [member type], and I thought you might be able to help.
Do you know anyone who might be interested?”

For every 10 messages I send like this, usually around 3-4 people respond.  And many of those end up with solid referrals. This is how I found my bass player.

Facebook ads have by far been the most effective source of leads for me. Once I figured out what I was doing, I was able to get new leads for around $2.50 each.

Once you have your page set up, you can create your ad.  Here’s exactly how I set up the ad I used to find vocalist leads.  After you’ve selected to create a new ad, choose the “Reach” option.

Next, you want to choose your age, gender, and location preferences.  My band was looking for a male singer in Jacksonville, Florida in roughly their 20s. 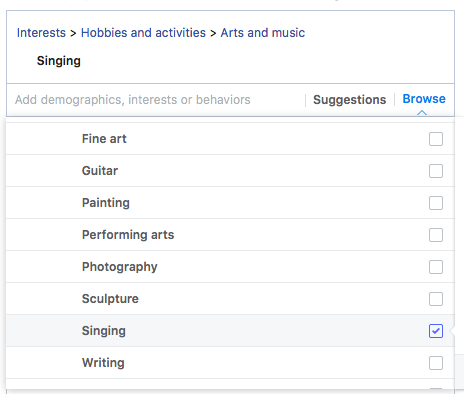 You can also type singing, guitar, drums, etc. into the box, but make sure when you make your selection you include the option that’s under the subsections mentioned above to target people who have an interest in playing these instruments.  Facebook’s ad platform seems to do a great job at showing the ad only to people who are most interested in whatever your selection is.

Next, click the “Narrow Further” targeting option and start adding bands related to the style of music your band plays, like this… 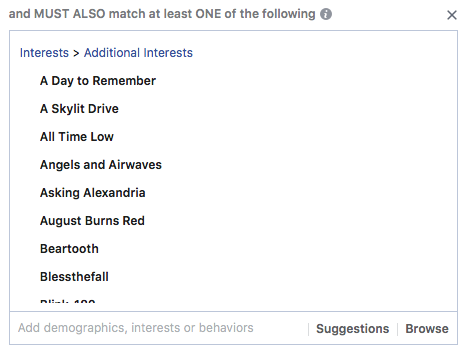 Add as many bands here as you can think of. The more bands you add, the wider your audience is.

After you finish adding in your target audience, choose your budget. I recommend spending at least $5 per day to get results somewhat quickly.

Finally, select “Next” to start creating your ad.

When creating your ad, Facebook allows you to choose from a selection of free stock images.  Choose a stock image that shows a musician performing on the instrument you’re targeting to capture the attention of people who actually play that instrument.  These stock performance images work much better than images including any amount of text.

After weeks of testing, here’s the version of the ad I made in our search for vocalists that worked best for gathering likes and comments. 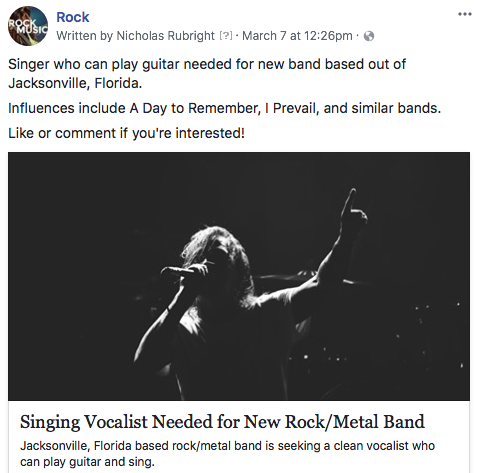 Once you finish putting together your ad, click confirm at the bottom of the screen to publish your ad.

After publishing, your ad will need to go through a review process where Facebook makes sure you didn’t violate their terms by, for example, using any explicit language or having more than 20% of your image include text.

Getting leads from your ad

Once your ad is running, check the notifications on the Facebook page you created and you’ll notice that people are liking and commenting on your ad.  The people who have liked or commented on your status are your leads.  Click through to their profile and send them a message from your personal account mentioning the ad you made, and ask if you can send them a demo to see if they’re interested in the style of music you’re looking to make.

If your demo interests them, ask if they can send a recording showcasing their talents.  Asking for a recording is a good test of reliability, and having reliable members is extremely important in creating any amount of progress for your band.  Without reliable band members, it’s unlikely you’ll progress fast enough to keep everyone interested in the project.

After you’ve listened to each other’s demos, if you think your musical skills seem like they would fit well together, set up a jam session to see if you’re musically and personally compatible.

Be careful about letting your first impression of someone determine your opinion of him or her – whether it’s positive or negative. It’s very easy to like someone when first meeting them, but having 3-4 practices with someone before deciding if they’re in the band can give both of you enough time together to determine if you’re a perfect fit for one another.

These are the most effective strategies I’ve found for finding great band members.  I’ve spent lots of time trying things that haven’t worked, and have tried nearly everything you can find online about searching for potential band mates.

By far, the Facebook ads have been the most effective channel of the three for finding potential band members.  The best part is that once you set up the ad, all you have to do is message people that have come to you – you don’t have to do a lot of manual searching anymore.

Hopefully these tips give you a better chance at piecing your band together with the perfect lineup of people so you can start releasing music and playing shows!