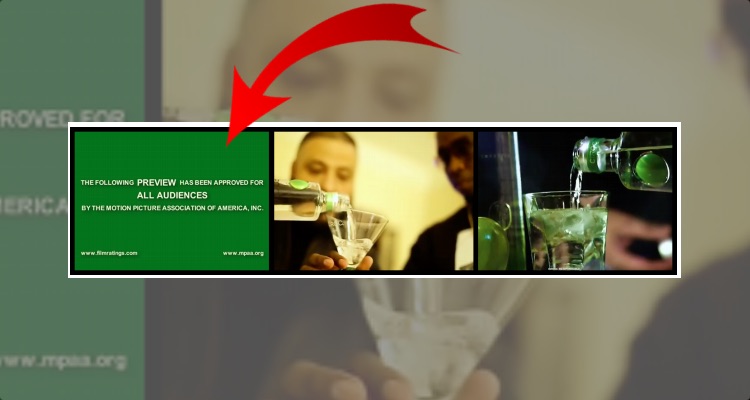 Updated, April 20th am PT: The MPAA has now opted to comment on the letter after initially declining, clarifying that DJ Khaled had already removed the video prior to the group mailing their letter to him.  The removal actually appears to have been prompted by another threatening letter — from a consortium of other groups including Truth In Advertising.

When you hit a certain level — and enough Instagram followers — everyone notices everything you post.  That certainly applies to DJ Khaled, aka Khaled Mohamed Khaled, whose life is likely filled with lots of legal run-ins like this one.

In Khaled’s fabricated rating, ‘All Audiences’ were supposedly approved to watch an ad featuring the DJ, Diddy, and other celebrities/good-looking people enjoy Apple Ciroc.

All of which introduces a few problems.  First, the MPAA almost certainly didn’t issue an ‘All Audiences’ rating for a paid Instagram ad for booze.  But DJ Khaled is also posting this ad to an all-ages Instagram audience, which could result in criminal penalties.

That makes this a more serious matter than a fake MPAA rating, especially given Khaled’s younger audience.

In fact, it’s likely that millions of viewers under the age of 21 are watching DJ Khaled’s paid advertisements for various alcoholic brands.  That has caught the attention of several organizations, including Truth In Advertising, who have forced the rapper/DJ to remove a number of the alcohol spots.

Separately, new regulations require celebrities to disclose whether brands are paying them to promote their products on platforms like Instagram.  It doesn’t appear that DJ Khaled has been complying with any of those rules.

Either way, the MPAA wants absolutely nothing to do with this mess.  Accordingly, the organization issued legal threats to force DJ Khaled to remove the video in question. Which is exactly what Khaled did.

(Update Apr. 20th am PT: the MPAA has now responded, and noted that Khaled had removed the video prior to their letter.  The removal appears to have been prompted by another threatening letter from a consortium of companies including Truth In Advertising.)

Here’s a quick excerpt of the MPAA’s letter to Khaled, leaked to Digital Music News.

“While it appears that the video referenced in Truth in Advertising’s letter has been removed from Instagram (where Truth in Advertising stated it had been posted), we wanted to inform you of this violation of the MPAA’s trademark and copyright in the Trailer Tag, and request that you instruct Mr. Khaled not to use the Trailer Tag, or any other of the MPAA’s marks, for any video which has not been rated by the MPAA (as his video was not). Also, while we were not able to locate any other of Mr. Khaled’s videos on social media that use the MPAA’s marks, we request your assurance, in writing, that no such videos that use the MPAA’s marks are currently available to the public, and that Mr. Khaled will not use such marks without authorization in the future.”

We contacted the author of that letter, MPAA’s Associate General Counsel of Copyright & Legal Affairs, Benjamin S. Sheffner, who declined to comment.