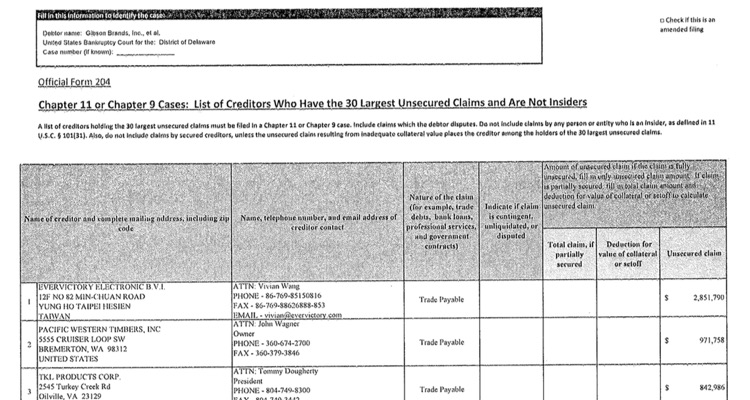 Gibson Guitar had been failing to pay key supplies for months leading up to its Chapter 11 bankruptcy filing, according to paperwork shared with DMN.  Here’s a partial list of who’s owed what.

The months ahead promise to be fairly ugly for Gibson Guitar — though at least the company has a financial lifeline.  But that’s little consolation to dozens of companies holding the bag on millions in unpaid invoices.

According to federal bankruptcy filings shared with Digital Music News this week, Gibson has been stiffing key suppliers and partners for months.  And, for millions.  At this stage, it’s unclear if those companies will ever be paid back, though at least a formal bankruptcy proceeding introduces some order into the chaos.

Gibson’s outstanding debt has been estimated at more than $1 billion, with the bankruptcy proceeding specifically covering a $500 million tranche (give or take a million).  The proceeding was forced by agitated bondholders as the chances of default skyrocketed — and Gibson’s leadership showed little appetite to pivot.

Accordingly, Gibson CEO Henry Juszkiewicz has been moved to a minority ownership position, while activist creditors determine the company’s next steps.

Just ahead of the bankruptcy filing, DMN reported on a $50 million lawsuit from Tronical.  The German-based technology partner helped Gibson integrate auto-tuning knobs into a number of Gibson models, but apparently never received any money on the backend (Gibson has now countersued).

Now, it looks like Tronical is just one of several Gibson partners getting burned.

According to bankruptcy filings shared with DMN, here are the top partners owed money by the guitar manufacturer.  In total, Gibson’s unpaid invoices — to this group alone — tops $11 million.

On Wednesday, Gibson received approval from the presiding bankruptcy judge to start accessing a $135 million credit line.  That lifeline will keep the lights on, and possibly enable a turnaround.

And hey, maybe even pay a few suppliers and partners back.

Here’s the full bankruptcy filing, officially submitted to the U.S. Bankruptcy Court in the District of Delaware on May 1st.