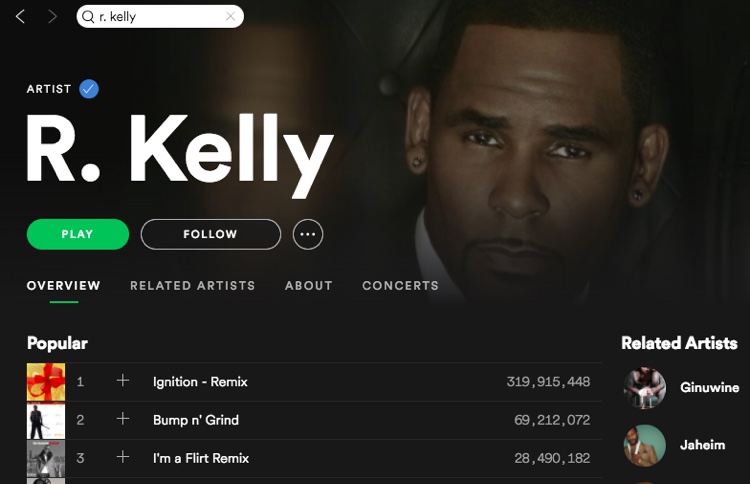 You can still find every R. Kelly and XXXTentacion song on Spotify.  But neither artist will be available on Spotify playlists or actively promoted by the platform, effective immediately.

Updated (11:15 am PT): Spotify has now removed all XXXTentacion tracks from its various playlists.  More details in the article.

Spotify has just opened a huge can of worms with this one.  But maybe that’s exactly what was needed.

Effective immediately, Spotify is now removing R. Kelly’s music from all of their playlists.  You can still find the r&b singer’s music, and Spotify won’t remove R. Kelly tracks from personal playlists.  But they won’t be promoting his music anywhere on the service.

Hours later, the platform also stripped its playlists of songs from rapper XXXTentacion.  Among other charges, XXXTentacion, whose real name is Jahseh Dwayne Onfroy, faces charges of aggravated battery against a pregnant women, as well as witness tampering.

The moves will create a lasting financial blow to both Kelly and Onfroy.  As Spotify’s dominance grows, its playlists are starting replace radio.  So, if playlists are the new radio, then both artists just got yanked from one of the biggest stations in the world.

In a statement issued this morning, the streaming platform indicated that R. Kelly simply disagreed with their values.

“We don’t censor content because of an artist’s or creator’s behavior,” Spotify relayed. “But we want our editorial decisions — what we choose to program — to reflect our values.”

Spotify has not issued a separate announcement related to XXXTentacion, though we’re expecting other artists to join the blacklist.

The removals follows an aggressive campaign against the singer over serious sexual abuse allegations.  The Chicago-based singer, whose real name is Robert Sylvester Kelly, has been accused of brainwashing numerous ‘sex slaves’ in a bizarre, sequestered facility.  Kelly has adamantly denied the allegations, despite the presence of numerous accusers.

For more than a decade, the singer has been accused of having sex with minors, though his marriage to a 15-year-old Aaliyah in the 90s was tolerated.

XXXTentacion has long been battling charges of violence, including those against women.

The most serious are charges of aggravated battery involving a pregnant woman, as well as charges of domestic battery by strangulation and false imprisonment.  XXXTentacion has denied those charges, and stated the alleged victim was not pregnant, but the victim has told an entirely different story.

Guess that behavior isn’t flying anymore, and Spotify is taking steps to de-emphasize the artists on its very powerful platform.   But that opens a myriad of complexities ahead, given the shady ‘values’ of hundreds of successful artists — past and present.  Indeed, one glaring example involves Chris Brown, who’s ‘Freaky Friday’ has been a top-streamed song on the Spotify playlist, thanks partly to Spotify’s own promotional efforts.

Spotify has not responded to an inquiry about Brown.

Spotify has also taken steps to clamp down on white supremacist artists.  And this is part of that scrub.  Those steps were applauded, though critics have also pointed to unfair retaliation against artists who had secured Apple Music exclusives.  Indeed, Spotify is now the judge, jury and executioner, with the power to give — and remove — plum playlist inclusion.