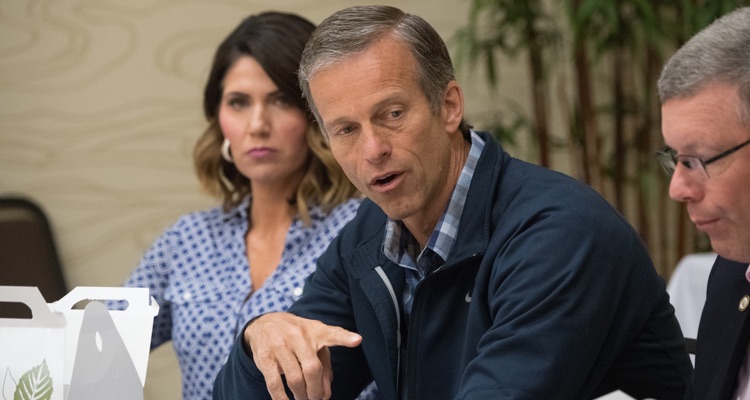 Is he really true? South Dakota Republican Senator John Thune — one of the biggest recipients of ISP donations — says most people don’t care about net neutrality.

Do average Americans really care about net neutrality?  Multiple polls show that a large majority of Americans definitely care, with that percentage rapidly increasing once people familiarize themselves with the issue.  And politicians in multiple states are taking notice, with two states (Washington State and Oregon) already passing net neutrality laws.

But according to South Dakota Republican Senator John Thune, most Americans don’t care about the issue.  And they’ll care even less as the months go by.

Earlier this week, the Senate successfully votes to activate the Congressional Review Act, or CRA, to nullify the FCC’s net neutrality rollback.  But in a just-published interview with C|Net, Thune dismissed the Senate resolution as ‘an exercise in futility’.  “There is no future in which this CRA does anything other than generate energy and momentum among activists and donors who care about this issue,” Thune declared.

Of course, Thune voted against the CRA resolution.  Unsurprising, given that the Senator has received a healthy $928,428 in donations from major ISPs, according to figures compiled by Fight for the Future.  In fact, only two other Senators voting against the CRA received more: Mitch McConnell (R-KY) , who received  $1,119,163 in donations; and Roy Blunt (R-MO), who topped the list with $1,283,416.

Actually, Thune is largely correct in predicting that the CRA has little chance of actually stopping the FCC’s rollback.  That’s because the House of Representatives is heavily conservative, and largely against net neutrality.  “I find it hard to believe that a Republican and largely conservative House is going to in any way support something that re-regulates the internet,” Thune stated.

Then again, that was the sentiment leading into the Senate vote.  But instead of floundering, Senate Democrats managing to lure three Republicans across the aisle, resulting in a 52-47 majority.  Previously, most expected the CRA to receive a 50-50 draw — at best — with Vice President Mike Pence casting the tie vote against it.

But despite that unexpected victory, Thune was largely dismissive of the vote as a ploy to get votes.

Actually, that’s exactly what it was, with Democrats responding to signs that voters seriously care about this issue.  Accordingly, the CRA vote was partly initiated to force Senators like Thune to actively vote against the measure, then defend that vote on the campaign trail.

Thune says that strategy won’t work, because not enough Americans care.  “I think they actually believe this is an issue that people will vote on in the fall,” Thune laughed.

“But when June 12 rolls around and the internet still works and people can still watch Netflix, I think it’ll be an issue that doesn’t have the political pop that the Democrats are hoping for.