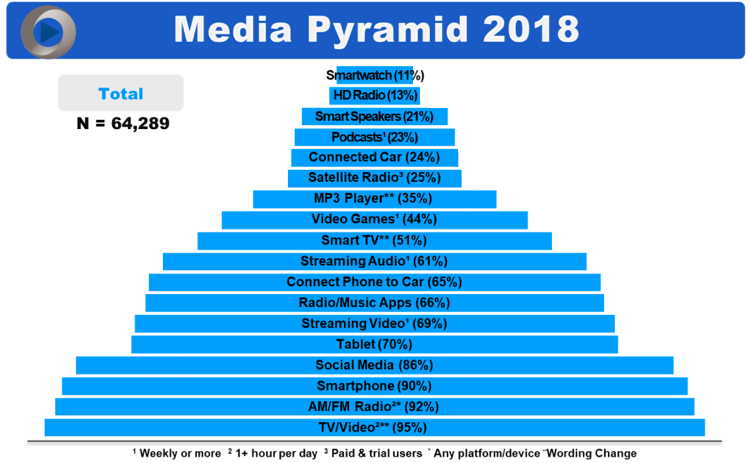 On one hand, media consumption is becoming more dizzyingly complex by the second.  But it’s also getting a lot simpler.

This isn’t definitely isn’t your father’s media landscape — to put it mildly.  And increasingly, the ‘average’ American is plugging into a growing number of screens, devices, and audio sources.

But despite the seemingly huge array of options, a lot of people are conglomerating around similar platforms and experiences — like Spotify, Netflix, and mobile phones.  At the same time, there’s also plenty of splintering into different experiences and formats, including satellite radio, smartwatches, smart speakers, and even old school MP3 players.

Let’s break it down.

The above data was compiled by Jacobs Media, a US-based media research group.  The group polled nearly 65,000 people across the United States as well as Canada, and presented their findings at the  recent Worldwide Radio Summit in Los Angeles, hosted by A&R Worldwide.  That followed the multi-day Musexpo event, which focused heavily on music industry and A&R issues.

Jacobs Media simply asked participants how they specifically consume media — day in, and day out.  And, how frequently they used different devices and platforms.  Of course, that produced lots of overlapping results, so don’t look for anything to add up to 100%.  This is merely a look at what percentage of respondents indicated that they use a specific device or platform, and how often they use it.

Of course, most respondents indicated a large mix of platforms and devices.  Most people toggle between lots of different media experiences daily, with multiple platforms often used at the same time.  For example, a phone might be Bluetooth-connected into a dashboard during a commute, both for calls and podcasts.  If that gets boring, satellite radio is turned on.

Perhaps most surprising is the staying power of AM/FM radio.

Astoundingly, 92% of respondents indicated listening to an hour or more of AM/FM radio a day.  That seems a little hard to believe, and probably reflects some skew by Jacobs (which is heavily invested in traditional radio).

In its follow-up questions, those that checked ‘AM/FM Radio’ cited ease-of-use and cost (i.e., free) as primary reasons for listening to traditional radio.  This is a format that may be surviving not because it’s great, but merely because it’s so cheap and easy to use.

+ This Year, Not a Single Grammy Winner Thanked Radio. Here’s Why.

In terms of greatest gainers, smart speakers easily took the cake.  Just last year, 11% of survey participants indicated that they use smart speakers on a regular basis.  That number is now 21%, nearly double the rate in just one year.

Surprisingly, smart watches are also increasing, moving from 8% in 2017 to 11% in 2018.  Streaming audio is also notching upward, though unfortunately this survey doesn’t delve too deeply into on-demand platforms like Spotify and Apple Music.  Both are experiencing huge surges of late, most remarkably in paid subscriptions.

Here’s a look at how these different categories performed year-over-year.

You can see the percentage changes from 2017 overlaid in gray. 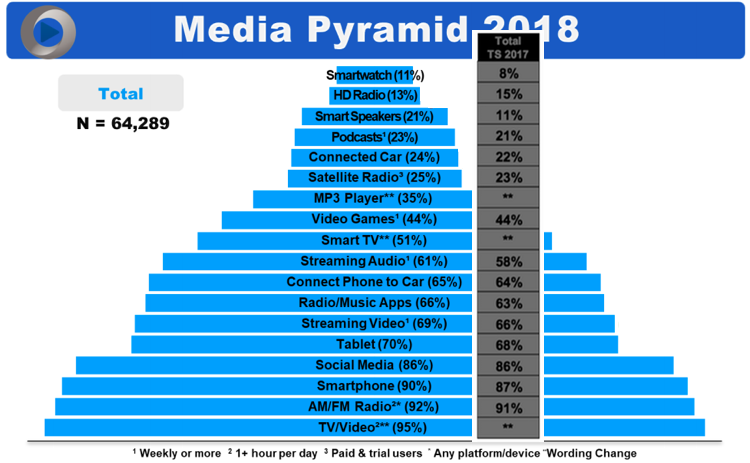 Of course, this only touches upon the avalanche of programming options available.  But content is driving a lot of this, and there are now more music, TV, movie, and gaming experiences than ever.  Still, giant winners like Game of Thrones and Ed Sheeran may be benefitting from the massive selection, simply because people aren’t interesting in sifting through it all.

Paradoxically, overwhelmed consumers are retreating, and glomming around fewer selections.