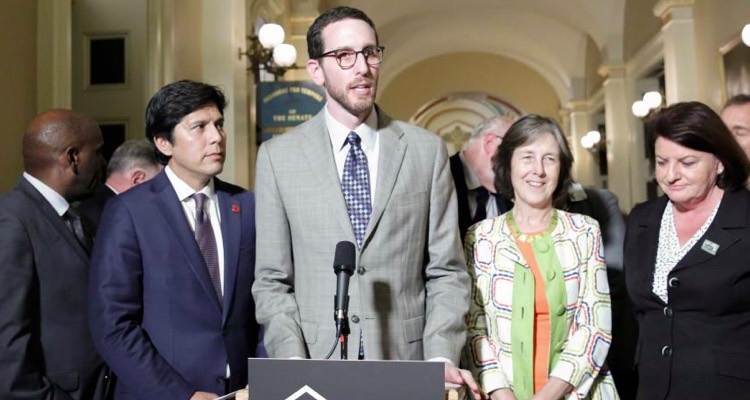 California’s Senate is now taking a critical vote on SB 822, considered the strongest state net neutrality law to date — and a major challenge to the FCC.

Washington State and Oregon have already passed net neutrality protection laws.  But California’s law is considered far stronger, and extremely problematic for the FCC and ISPs if passed.

Now, net neutrality champions are rallying in Sacramento to encourage Senators to pass SB 822, championed by Senator Scott Wiener.  The bill would outlaw practices like paid prioritization, throttling, and site blocking, all of which are now becoming legal thanks to the FCC’s rollback of previous net neutrality protections.

The vote is expected to happen as soon as today (Tuesday).  Accordingly, ISPs like AT&T, Comcast, and Verizon are also pushing aggressively to defeat the measure, especially considering the importance of California on the national stage.

That’s because it’s specifically crafted to challenge the federal government’s authority to enact net neutrality laws.  Noted contributors include Barbara van Schewick, a Stanford Law School professor, and the team of lawyers at EFF.  Both groups have built upon the laws passed by both Washington State and Oregon, with an eye towards creating a fierce legal challenge to the FCC.

Already, that team has discovered a major misstep by FCC chairman Ajit Pai.  As written, the FCC’s rollback order may have accidentally permitted state net neutrality laws, something SB 822 is designed to attack.

“We believe we have a strong argument that California under our police powers has the ability to protect consumers,” Scott Wiener offered in a statement.  “This is a comprehensive and aggressive bill in terms of protecting net neutrality. We’re trying to adopt the protections that the FCC abandoned.”

According to the EFF, the elimination of of net neutrality laws could have a serious impact on the music and media industries.

“An ISP that owns a streaming service has a reason to relegate competitors to the slow lane, even if the competitors have a better service,” the group explained.  “Similarly, anti-competitive zero-rating practices allow ISPs to pick and choose services that don’t count against a customer’s data cap. A low data cap combined with zero-rating its own content incentivizes people to use the ISP’s service to watch its content, again artificially increasing its bottom line.”

Future problems are easy to imagine. In the streaming music world, for example, AT&T would have a major incentive to speed delivery for TIDAL, given its ownership stake in the company.  Spotify, not owned by a major ISP, could get squeezed.

That type of advantage could also give ISPs tremendous leverage in other ways, particularly in acquisition discussions.  AT&T has the power to throttle a company like Spotify, SoundCloud, or Deezer indefinitely, which means they can also invest or acquire in one of those companies at a serious discount.

SB 822 gives California the power to ban any ISP that doesn’t adhere to net neutrality provisions.

Which means that companies like Comcast, Verizon, AT&T and others could potentially lose business in a state ranked a the fifth largest economy in the world.  Which spells billions in losses, effectively overnight.  Of course, ISPs are spending millions to defeat this bill, with on-the-fence legislators heavily targeted (or, paid).

Already, tens of thousands of Californians have petitioned to preserve net neutrality laws.

According to Fight for the Future, a pro-neutrality organization, some serious grassroots action is happening.  Evan Greer, deputy director of Fight, told us that tens of thousands of Californians have already contacted their representatives.    “Federal net neutrality protections will officially end in less than two weeks,” Greer stated.

“These senators have a decision to make: will they leave their constituents and small businesses in California completely unprotected from throttling, prioritization fees, and other abuses? Or will they vote for a bill to restore protections to the state and ensure that all Californians have access to a free and open Internet?”

Greer also noted that “ISP lobbyists have been flooding Sacramento with misinformation and did everything in their power to kill this bill before it could get to a vote.”

That effort obviously failed, though this still far from being enacted into law.