11 Years Later, the Famous YouTube ‘Dancing Baby’ Case Is Over 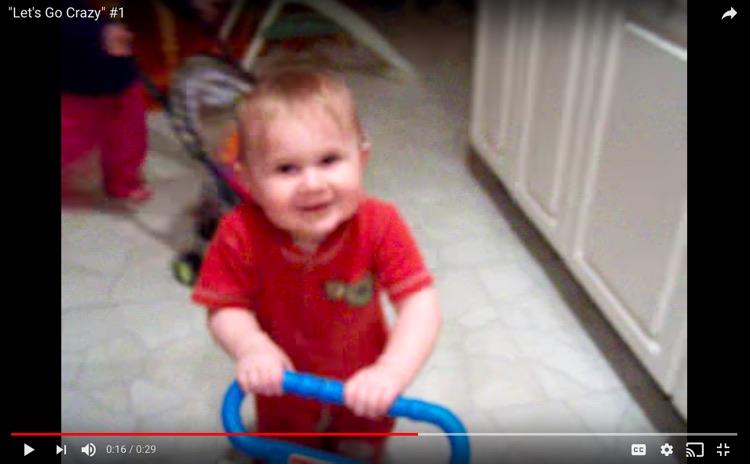 In 2007, a cute video of a baby dancing got uploaded to YouTube.  That was the start of a huge legal battle.

In 2007, YouTube was a mere fraction of its size today.  Still a growing platform for video sharing, YouTube was freshly obtained by Google (for a mere $1.65 billion).  It was during that time that Stephanie Lenz uploaded a video on YouTube of her toddler, Holden, dancing to the Prince song, “Let’s Go Crazy.”

And that was the start of a legal battle that last more than a decade.  The legal battle even outlasted Prince, who sadly passed away in 2016.  While alive, Prince was an aggressive protector of his online rights, and encouraged the case against Lenz.

The video was a twenty-nine-second clip that had a poor audio quality.  In fact, the song could only be clearly heard for about twenty seconds — though it was a recognizable and catchy song.  And ‘recognizable’ in the sense that any listener or IDing technology could figure out what it was.

After Lenz posted the video, Universal Music claimed a copyright violation.  It also registered a takedown with YouTube.  In response, Lenz sent a counter-notification that her video should be reposted.  She reasoned that the clip didn’t infringe the label’s copyright because it constituted fair use.

The video was down for several weeks before being reinstated.

And Lenz didn’t not stop there.  More recently, she filed a lawsuit against Universal for violating the Digital Millennium Copyright Act (DMCA) by knowingly abusing its copyright claim.  Assisted by Electronic Frontier Foundation (EFF) attorneys, Lenz doubled-down on her fair use claims.

The EFF loved this case from the beginning.  They felt that it was the perfect opportunity to set a precedent for distributed social media platforms.   Unfortunately, it hasn’t quite panned out that way.

The ‘results’ included a confusing 9th Circuit Court of Appeals decision.  The Court ultimately ruled in favor of fair use, but didn’t penalize Universal for copyright abuse.  The reason is that UMG was judged to have a fair claim.  Ultimately, the court declined to impose a strict, algorithmically based  test for fair use and infringement takedowns.

+ Facebook Is Rolling Out a Bevy of Brand-New Music Features

He also added that copyright owners shouldn’t be liable “simply because an unknowing mistake is made.” He then advised the high court to pass on the case.

And now, after more than ten years — and with judges issuing different opinions and reconsiderations — the latest case is ending in a settlement.

Both parties were gearing for a potential trial.  Unfortunately for those seeking a precedent either way, a private settlement has been ironed out.  Which means this isn’t one for the legal record books.