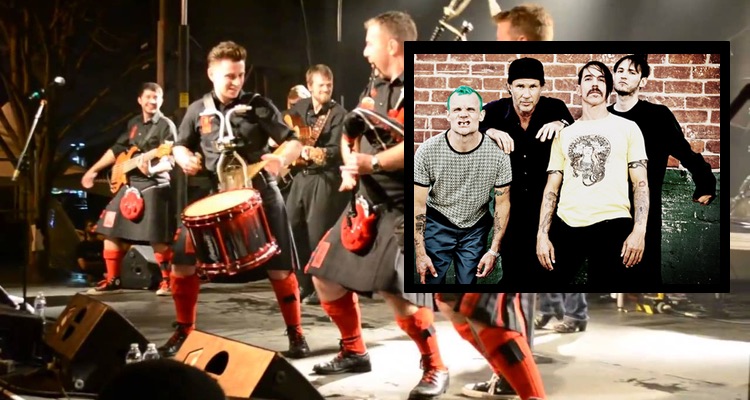 We’re not sure how long this clever wordplay will survive.  Especially since fans of the Red Hot Chili Peppers are now clearly getting confused — over and over again.

How confused?  Apparently, some Red Hot Chili Peppers fans have actually purchased tickets to see the ‘Red Hot Chili Pipers,’ a Scottish bagpipe band, without realizing the problem until it was too late.  Expecting to see Anthony Kiedis and Flea for a shockingly low price in an unexpected location, these fans were in for a totally different musical treat.

Taylor Jenke at Tone Deaf has been tracking this recurring issue.  And thankfully, some fans are laughing at their misfortune.  After all, it’s hard to score RHCP cheap tickets at the last minute, and this isn’t a band that plays free gigs in a local park.

This wasn’t a problem when the Red Hot Chili Pipers first started in 2002.  The motley assortment of guitars, drums, bagpipes and singing was mostly a gag.  These days, the Pipers have become a more serious thing, especially in their home turf of Scotland.

Which means a lot of people are missing the joke.

Here’s a Reddit ‘TIFU’ entry from ‘kconjog,’ who hails from Edinburgh.  He bought the tickets for £30.

“I am a huge fan of the Red Hot Chili Peppers and I was super stoked to finally see them in Edinburgh.  Most bands play in Glasgow so I couldn’t believe my luck when I saw they were playing in my city!

“So we turned up full of excitement really ready to get into the music and then I heard some bagpipe music was playing.  I thought hmm interesting… not what I expected from a warm up act but seeing as we are in Scotland and the capital city I really did not think it was anything out of the usual.

“About an hour in I was getting a bit impatient, the music was great with good vibes but I was waiting for the Red Hot Chili Peppers to come out so I could do a bit of headbanging to some sweet guitar riffs!

“I turned to the man next to me and asked when the Red Hot Chili Peppers were coming on he laughed and said ‘aye pal good joke eh’.

“It was at this moment I realised I was not going to see the Red Hot Chili Peppers.”

Actually, that was one of several mishaps peppering the Reddit thread.

One guy almost went to see the band in a small US park.  More serious cases involved hundreds of dollars in mistaken ticket purchases (with flights and hotels included).

There was even a story involving a pricey Valentine’s Day gift, with a flight from England to Northern Ireland — with the full expectation that the Peppers, not the Pipers, were going to play.

That was earlier this year.

Still can’t believe we’ve flown over to Belfast not for the @ChiliPeppers but to see the ‘worlds best bagpipe band’ @chillipipers … thought I’d got a rate good deal on tickets n’all. Had a nightmare pic.twitter.com/YO72amVR4I

The repeated instances suggest that the actual Red Hot Chili Peppers are aware of the issue, but deciding not to take action.  Maybe they’re also just having a good laugh.