Bhad Bhabie Just Sold Out the Roxy In Los Angeles — Any Questions? 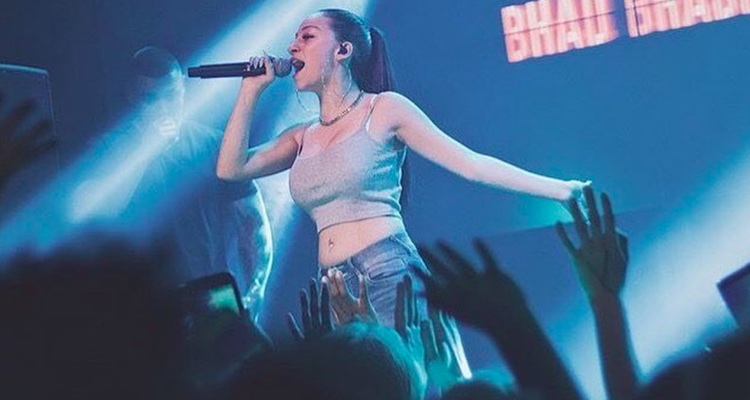 ‘Real artists’ absolutely hate Bhad Bhabie — aka Danielle Bregoli aka ‘Cash Me Outside Girl’.  But this ‘fake rapper’ was easily filling venues on her recent U.S. tour, including the Roxy in LA.

The Roxy isn’t the Staples Center or MSG.  But a sellout at the Roxy is still an accomplishment, especially when it involves a rapper once dismissed as a 15-minute viral sensation.

Just yesterday, Bhad Bhabie — aka ‘Cash Me Outside Girl’ — easily filled the Sunset Strip venue, the last stop on a club tour of the U.S.  TMZ reported ‘the long ass line down Sunset,’ with fans, photographers, and film crews cramming for ringside positioning.

Based on scattered reports, Bhad Bhabie was also drawing serious crowds on most of her recent U.S. tour dates.  Here’s a great in-depth report from Spokane, Washington, where a mix of parents and underage fans made for an awkward mix.  Either way, you get the sense that Bregoli and Atlantic Records are smartly parlaying a viral moment into an actual career.

Meanwhile, show reviews on Songkick are overwhelmingly positive.  This type of review, from Fort Worth, TX, is fairly typical:

“Oh that shit was so lit and the line up was awesome, everyone was so hyped and ready to see bhad bhabie and Asian doll. It was a cool location and atmosphere too. It was basically perfect.”

At first, it’s hard to imagine how Bregoli can actually fill a set.  Since signing with Atlantic, the 15-year old has released a few tracks, including collaborations with Lil Yachty and Ty Dolla $ign.  But these are short songs, and frankly, there isn’t much of a ‘catalog’ to speak of.

Apparently that’s not a problem, with Bhabie employing lots of on-stage antics to fill the gaps.  That includes opener Asian Doll, a pre-show hype girl, video clips of Dr. Phil, and a crowd-pleasing lap dance.  That’s entertainment folks — and Bhabie (and Atlantic) know their underage audience.

And yeah: if you’re over 25 and at this show, you’re either a parent, a culture junkie, or a plain-old creeper.

Now, it’s onto Europe, where Bhad Bhabie is testing the formula in Germany, Belgium, France, the Netherlands, and the UK.  Amazingly, Bregoli will actually be lifting the level of American ambassadorship in Europe with the gigs.

All of the European dates are during the first half of July, with other overseas shows potentially on the way.