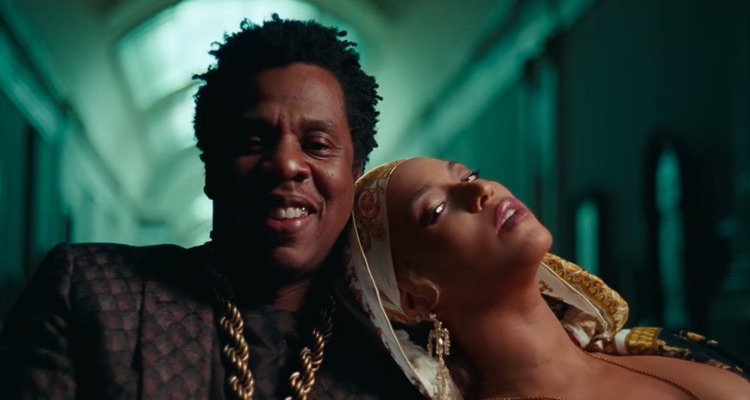 Beyonce & Jay-Z at the Louvre after hours on ‘Apeshit,’ the lead single from the brand-new album, Everything Is Love.

Beyonce & Jay-Z just dropped a surprise, 9-song album over the weekend.  And it’s not just a limited Tidal exclusive anymore.

Update 2, Monday June 18th: After what looked like a limited Tidal exclusive, Beyonce & Jay-Z, aka ‘The Carters,’ are now spreading their album to a number of different outlets.  After launching on Spotify and Amazon Music this morning, the album is now available on Deezer, Apple Music, and what appears to be a growing number of other outlets.   But importantly, free Spotify users will not have access to the album — at least not during the exclusive window,

The opening track. ‘Apeshit,’ is pretty damn good.  And the video is even better.  And despite a Tidal exclusive over the weekend, Beyonce & Jay-Z are distributing this release across multiple platforms.  That list now includes Spotify, Amazon Music, Apple Music, Apple’s iTunes Store, and Deezer, among others.

Importantly, free Spotify users will not be getting access to this album.  And we’re not sure when that restriction will be lifted — if ever.  Similarly, YouTube doesn’t have the album, either, with Beyonce and Jay-Z insisting on premium users only.

The album is Everything Is Love, a 9-song album released by ‘The Carters’.

We’re not sure whether that was an abrupt change in strategy, or whether an extremely limited Tidal exclusive was part of the plan.  Either way, weekend listeners with Tidal trial subscriptions are probably canceling this morning.

The move suggests a broader about-face.  Just recently, Jay-Z severely restricted access to his solo album, 4:44, to Tidal and Sprint subscribers.  Actually, Jay-Z has yet to license his considerable catalog to Spotify or other TIDAL competitors.  Spotify only offers a few Jay-Z tracks, and none of his classic albums.

On Tidal, the royal couple are heavily promoting their new release.  The Everything Is Love album cover has taken over tidal.com, where users are prompted to either log in, or start a trial subscription.

The Carters may have thought twice about a Tidal exclusive.

Instead of hundreds of millions of users, Tidal reaches approximately 1 million — at best.  And that figure is according to Tidal, a company currently mired in accounting fraud allegations.  The heavily-restricted album may have also caused problems on the touring front, especially given the important link between streaming and touring receipts.

The lead single is also available on YouTube, and it’s a juicy teaser.  The track features the duo prancing around the Louvre after hours, with an incredible beat and cameos from various Migos.