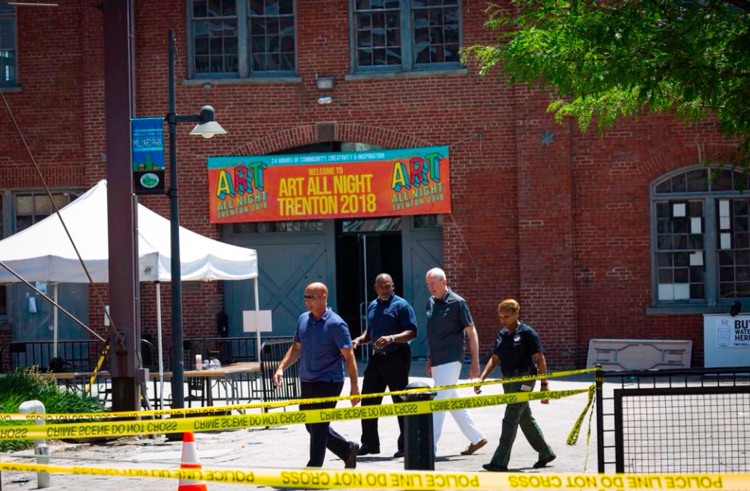 A New Jersey arts festival was the latest scene of mass gun violence over the weekend.  A personal beef caused injuries to more than 20 people, with at least one dead.

Sadly, concerts and arts events are now becoming prime targets of mass shootings.  But in the case of a New Jersey arts festival this weekend, the gun violence stemmed from a personal beef, not a mass-murdering lone shooter.

Of course, that’s small consolation to those injured or struggling for their lives as a result of the violence.  But this could have been far worse, especially given obvious gaps in security.

The gunfire erupted shortly after 2:45 am ET at Trenton’s Art All Night event, a celebration of local art, music, food and film.  The gun blasts triggered a stampede that has now claimed 22 injuries, according to Mercer County Prosecutor Angelo Onofri.  It also appears that the lone casualty belongs to one of the suspects in the shooting.

Other casualties involving innocent victims could emerge, however.  According to Onofri’s office, four people are being treated for critical injuries.  That includes a 13-year old boy.

The annual Art All Night is structured as a 24-hour event, starting 3 pm on Saturday and running until 3 pm on Sunday.

“On my way to Galilee Baptist Church in Trenton,” Governor Phil Murphy tweeted this (Sunday) morning.  “Devastated by last night’s shooting at Art All Night Trenton. We must eradicate the scourge of gun violence from our communities.”

The remaining festivities have been canceled, with large portions of the grounds marked a crime scene.

“We’re very shocked,” festival organizers stated.  “We’re deeply saddened. Our hearts ache and our eyes are blurry but our dedication and resolve to building a better Trenton through community, creativity and inspiration will never fade. Not tonight. Not ever.”

Art All Night is also a showcase of local musical talent. In fact, dozens of local groups perform at the event, from genres spanning Latin, rock, neo soul, americana, southern rock and more.

Now, the question is what happens next for Art All Night.  Undoubtedly, organizers will push forward with a 2019 event, though major questions surrounding security will have to be addressed.