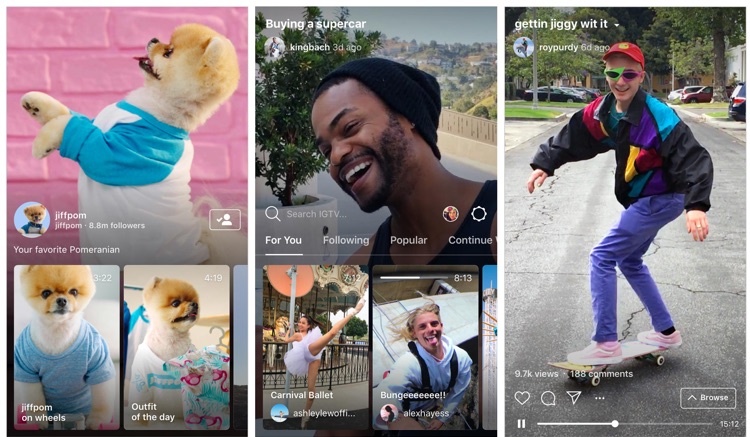 Who says YouTube gets to have all the long-form video fun?  Now, Instagram is bull-charging into YouTube’s turf with IGTV, a bundled app for longer-form videos.

This could be a serious game-changer.  And the possibilities for musicians, labels, and the broader music industry are massive.

Executives at Instagram just emailed Digital Music News with the development, though this has been the industry’s worst-kept secret of late.  Either way, the face of Instagram is officially changing, with long-form video officially part of the newly-upgraded app.

Importantly, longer-form videos will be contained within a bundled app called IGTV.  The app-within-an-app functions like a tab within Instagram, and is designed to help users separate mainline images and short-form video clips with longer-form stuff.

In terms of exact launch times: IGTV is getting rolled out this (Wednesday) morning across Android and iOS.  But you might have to wait a day (or so) for the update.

+ Facebook Is Rolling Out a Bevy of Brand-New Music Features

Once you’ve got it, IGTV is easy to activate: it’s right next to the DM at the top, ready to be enabled.  Actually, users can also launch a stand-alone IGTV app if they choose, depending on how video-focused they want their experience.  We’re hearing the exact launch dates of the embedded and stand-alone apps might differ slightly.

“On IGTV, the creators are the channels,” Instagram co-founder and CEO Kevin Systrom wrote.  “When you discover someone new, you can follow them to see even more of who they are with stories and posts.  And, if you feel inspired to make your own content, you can upload your own IGTV videos in the app or on the web.”

Aside from short clips, Instagram Live has also been an integral part of the Instagram experience.  But the newer video tier fills in the middle ground, while seeking to catalog the content for a searchable and organized experience.

Also worth noting: these are vertically-oriented videos, and designed with mobile as the primary platform.  That’s a clear competitive jab at Snapchat, which is basically functioning at Instagram’s R&D department these days.  But I digress.

Instagram has tapped a number of mega-influencers to jumpstart IGTV, including Selena Gomez.

Other hugely-followed IGTV ambassadors include Kim Kardashian West, Kevin Hart, Lele Pons, Manny Gutierrez, and Chris Hemsworth.  That’s a lot of celebrity wattage, though it’s good to see at least one music-oriented celebrity in the roost.

Also in a strike against YouTube: TechCrunch has reported that IGTV is planning to offer a lot of links to outside destinations, including homepages, e-commerce sites, and even other social networking platforms.  That has been a major complaint at YouTube, where an inability to monetize fans has fueled the growth of successful fan-funded platform Patreon.

So what does this mean for the music industry?

Let’s see how this evolves, though musicians (and their labels and managers) now have another huge promotional tool at their disposal.  At this stage, we’re not sure what this means for actual music videos, though Instagram (via Facebook) now has broad-reaching licenses from major labels and publishers.

Whether that evolves into a monetized, YouTube-style music approach is anyone’s guess, though rights owners now have a lot more leverage against YouTube.