Metallica’s Kirk Hammett on the Guitar: ‘Like all instruments, there’s a time when it goes out of fashion.’ 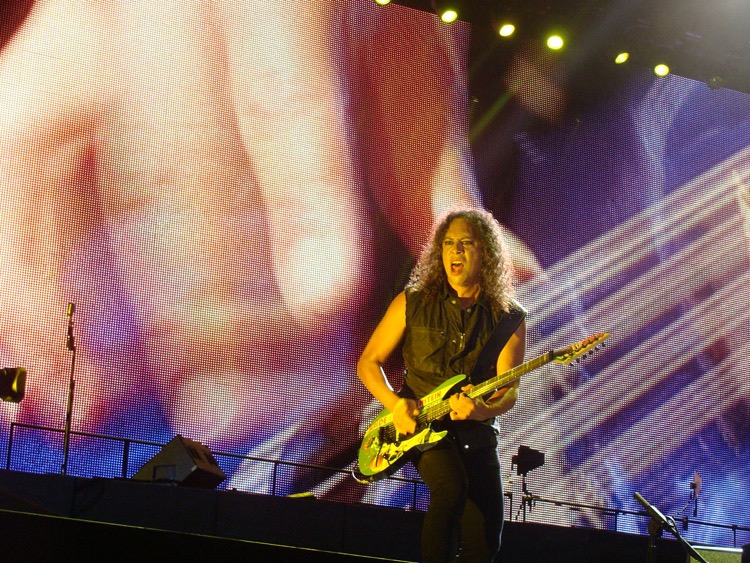 Metallica will never die, but will the guitar?  Now, another guitar god is commenting on the 6-string’s demise.

By now, it’s a tired cliché.  But if ‘rock is dead,’ then by default, so is its most revered symbol.  But maybe the guitar wasn’t meant to rule forever.

Accordingly, younger music creators are shifting en masse to laptops, samplers, and microphones, with rap and EDM commanding most of the attention.  Even guitar’s biggest adherents, Baby Boomers, are either downsizing their collections or focusing on vintage guitars.

“I don’t know what the fuck it is, but people seem to be seeing the guitar in a different light and passing them up for fucking samplers and whatnot,” Metallica’s legendary guitarist Kirk Hammett recently told Metal Hammer magazine.  “Maybe it’s a sign of the times.”

“Like all instruments, there’s a time when it goes out of fashion.”

Those are pronounced drops, though calling the guitar ‘dead’ would be a wild overstatement.

For starters, acoustic guitar sales are pretty strong, and niche guitars like ukeleles are actually growing.  And there’s certainly an ebb-and-flow to the popularity of various instruments.

“In the early 80s, the guitar wasn’t as popular as it became again in the mid-80s, so we’ll see what happens as far as enthusiasm is concerned with the actual act of making music with a guitar,” Hammett noted.

“It’s sad news to me, but I hope Gibson prevail. They have in the past.”

Earlier, Eric Clapton — oftentimes dubbed the God in times past — seemed unaffected by the guitar’s slide.  “I don’t know. Maybe the guitar is over,” Eric Clapton said last year when asked about eroding guitar sales.