The Average Working Musician Makes About $21,500 a Year 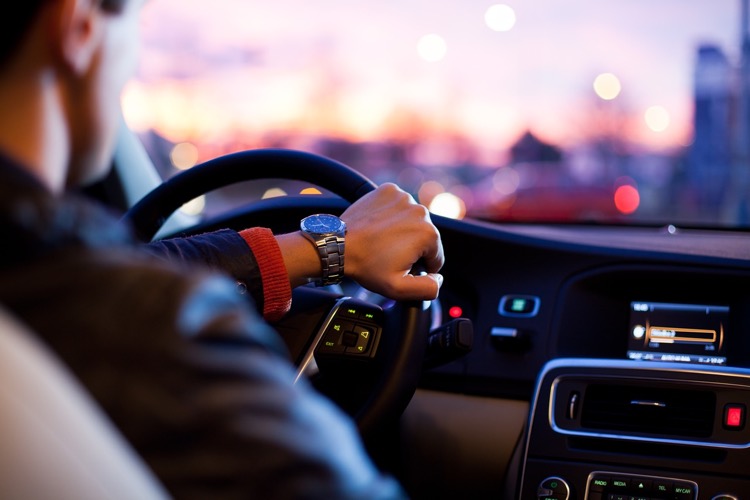 According to the Music Industry Research Association (MIRA), the average US musician makes about $21,500 from music-related sources.

Thanks to the exploding popularity of streaming music platforms, the music industry has experienced a revival.  Just see for yourself.

Warner Music made $3.58 billion in 2017.  Streaming pushed Sony Music’s revenue past $4 billion.  And Universal Music Group has performed so well, its parent company has toyed with the possibility of a $40 billion IPO.

So, with revenue rising, the average American musician must be doing quite well financially, right?

No.  Not even close.

According to a new study published by the Music Industry Research Association (MIRA), the average artist earns between $20,000 and $25,000 a year.  That number hasn’t changed in the last six years.  In partnership with the Princeton University Survey Research Center, MIRA surveyed 1,227 musicians living in the US.

Breaking down the numbers, median musicians made around $35,000.  They earned income from 3.5 music-related activities last year.  The average American musician, however, earned $21,300, primarily from 4 music-related sources.  In contrast, the average Uber driver earns $30,000 a year — from one source.

The highest-grossing sources for musicians include live performances (81%), conducting music lessons (47%), and performing in church choirs and other religious services (38%). 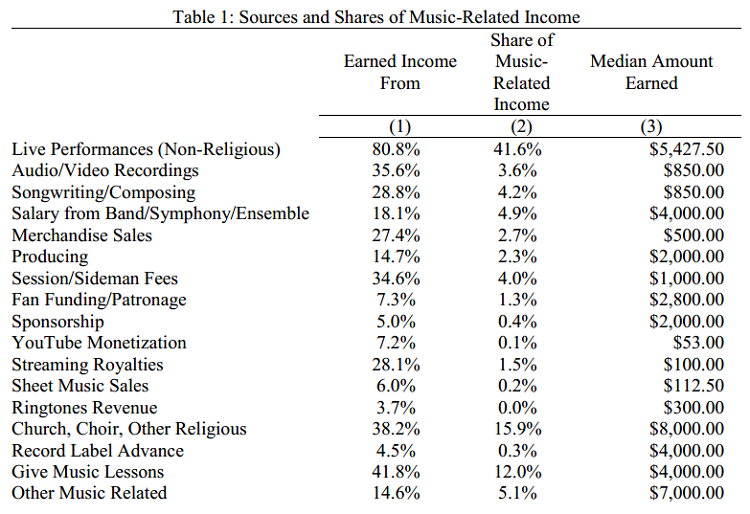 61% of all musicians said that music-related income “isn’t sufficient to meet their living expenses.”

Half of non-whites and 32% of whites shared this sentiment.

So, with music clearly not helping them make ends meet, why do they continue to perform?  Artist expression and the sensation they feel once they perform as well as collaborating with others.

But, what do they dislike?  Not knowing whether they’ll make ends meet and whether music will take them anywhere. 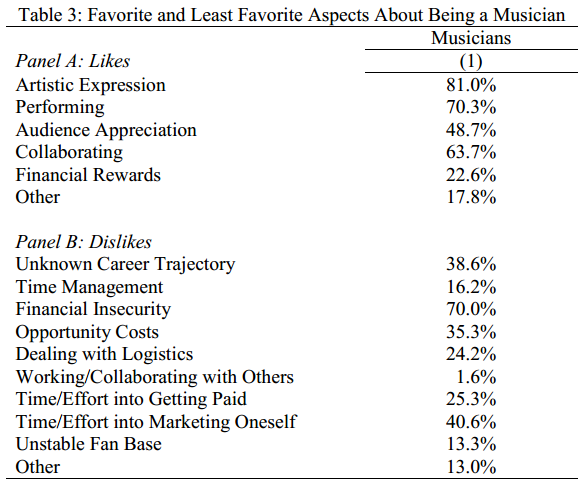 And what about the gender breakdown and discrimination?

In the UK, 71% of musicians reported suffering from panic and anxiety attacks.  69% had depression, and 18% suffered from other forms of mental illness.

US musicians didn’t fare much better.

Half of American musicians reported feeling down, depressed, and hopeless in the last two weeks at the time of the study.  Less than quarter of the general adult population in the US felt the same.  Musicians also had difficulty sleeping, low energy, trouble concentrating, and self-pity.  Alarmingly, 11.8% thought about dying or hurting themselves in at least several days in the last two weeks.

They also battle with alcohol and substance abuse.

Over three-quarters of musicians (78%) reported drinking alcohol at least once a week, higher than the national average (46%).  Musicians also drink more than the general adult population, 31.3% to 15.9% for “frequent drinkers” and 12.7% to 6.2% for those who drank more than three glasses of alcohol per week.

MIRA has published the study online, which you can find here.