Is the ‘Tip Jar’ Idea Finally Dead? Radical.fm Shuts Down 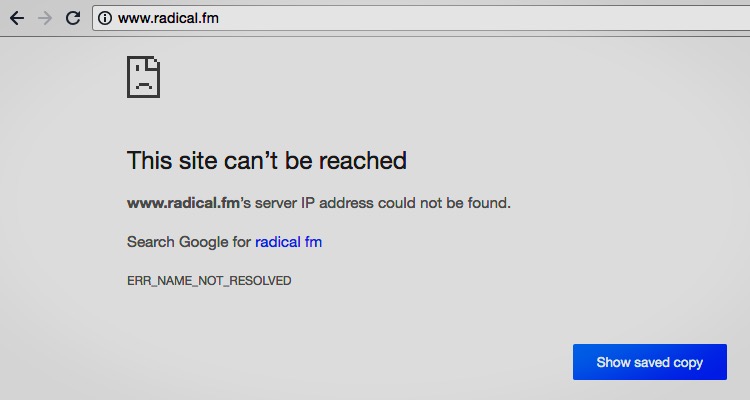 The situation at radical.fm on Monday morning.

Radical.FM officially shut down its services on June 30th.

The idea was fairly unique, and actually garnered some acclaim over years.  In its relatively brief lifespan, Radical.fm allowed anyone to play online DJ with little effort.  That included the ability to create live radio shows that reached a large fan base.   You could also stream music in a manner similar to radio, making it an accessible platform for music fans of all ages and of all genres.

We’ve seen other models loosely following the path in the past.  That includes self-broadcasting Live365, which also shut down before mounting a tepid comeback.

As of this morning, Radical.fm looks seriously down for the count.  Streaming competition in the previous few years has definitely grown more intense, with Apple, Google, YouTube, and Spotify making it extremely difficult for smaller competitors.  In fact, Spotify is squeezing a lot of niche players, with once-surging upstarts like HypeMachine feeling the pinch.

However, despite this competition, Radical.FM was successful, finding ways to sustain itself with the sheer quality of content and innovative methods it offered.  One of the most interesting things about the service was how it was funded—an online tip jar allowed users to donate on a pay-what-you-want basis, similar to services such as Wikipedia.

This model worked for quite some time, but its success was clearly finite.  Though the company is taking their services offline for the moment, it is rumored that this cost-cutting initiative was done so the company can try to find a partner of some sort.  There’s also the possibility that Radical is repurposing their innovative software into another more popular music streaming service.

One of the questions this raises, though, is the sustainability of crowd funding—is it still possible in 2018?

It appears to be a nuanced issue, with fixed price services such as Spotify offering subscriptions as low as $5/month for students, thus putting pressure on other companies to provide more content for less.  Is this a good thing for the industry as a whole, or does it only put unbearable pressure on smaller companies?

Then again, maybe it’s all about how the crowdfunding is arranged.  Look no further than Patreon, which has achieved considerable traction with structured patronage instead of sporadic, voluntary donations.  Maybe Wikipedia could take a lesson or two from Patreon’s successes.

By comparison, the ‘tip jar’ feels seriously outdated.  The idea has been bumbling around since the 90s, with entrants like Flattr spreading the concept beyond a single site.  But the idea tossing coins at a favorite broadcaster never quite gelled, with Radical unable to spin things the right way.