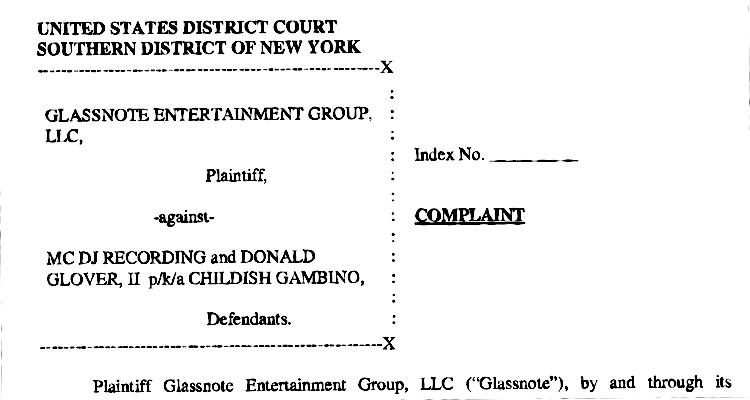 Legal warfare is brewing between Donald Glover, aka Childish Gambino, and his former label Glassnote Records.

We’re now at the early stages of a legal battle between Donald Glover and his former label, Glassnote Records.  And after a serious impasse and undoubtedly lots of shouting and threats, Glassnote is issuing a preemptive strike.

Glassnote Records was the label for Childish Gambino up until 2017, a critical period of growth for the artist.  Of course, Gambino’s groundbreaking smash, ‘This Is America,’ happened this year, with RCA Records instead of Glassnote.  When Glover switched to RCA, we didn’t get the sense the split with Glassnote was entirely amicable.

Now, we can safely say that there isn’t anything ‘amicable’ left between these two camps.  Just last week, Glassnote asked the US District Court for the Southern District of New York to preemptively determine whether it owed Gambino approximately $1,500,000.  Those royalties were generating from non-interactive streaming royalties, including Pandora and Sirius XM, and paid through SoundExchange.

As per legal policy that oversees SoundExchange’s royalty payments, Gambino is entitled to 45% of total non-interactive digital performance royalties.  5% goes to non-featured artists such as producers and sound engineers, and as the owner of exclusive public performance rights, Glassnote is entitled to the remaining 50%.

That breakdown is standard, which raises the question of why Glover’s camp is requesting the other half and more.

One explanation is that Glassnote’s distributor, Universal Music Group, eventually forged a direct licensing agreement with Pandora.  That siphoned off monies paid to SoundExchange, but doesn’t quite explain the demand for all of Glassnote’s revenues during the contract period.

Maybe there’s a missing piece here, but we’ll have to wait for more legal filings to see.

After signing with Glassnote Records in 2011, Gambino granted the independent music label exclusive exploitation rights which allowed the label to freely manufacture, sell, distribute, market, perform, and broadcast his music.  In addition, Glassnote Records agreed to pay Gambino approximately 50% of net proceeds royalties accrued as part of his contract.

According to Glassnote, that agreement has resulted in Gambino being paid approximately $8 million, with $2 million more on the way.  In addition to royalties paid to him by Glassnote, Gambino has also received around $700,000 in non-interactive digital performance royalties (see above).

Apparently, Glover’s legal team has been demanding payment from Glassnote Records for months and on June 26th, delivered an ultimatum.  They demanded “a payment of $1,500,000 as well as 100% of the ‘rights owner’ share of SoundExchange royalties on a moving forward basis.”

This doesn’t quite make sense, at least from the initial legal paperwork we’ve seen.  $1.5 million is pretty much all of the non-interactive digital performance royalties that have been accrued since 2012.  But Glover has already been paid the 45% he is entitled to, meaning even in the context of his own claim, he is demanding more than Glassnote’s portion.

Again, we’re guessing there’s more to this claim that we’re currently privy to.

Glover’s legal team gave Glassnote Records a July 6th deadline to comply with their demands under the threat of legal action.  In response, Glassnote Records has filed a formal action for a declaratory judgment with thee U.S. District Court for the Southern District of New York.

Also Read:  Kim Kardashian Sued by Paparazzi Photographer for Posting a Picture of Herself and Kanye West on Instagram

We have reached out to Glassnote Records, but as of this time, have received no response.

Stay tuned for more updates in this case.  We have a feeling there’s a lot more ahead.