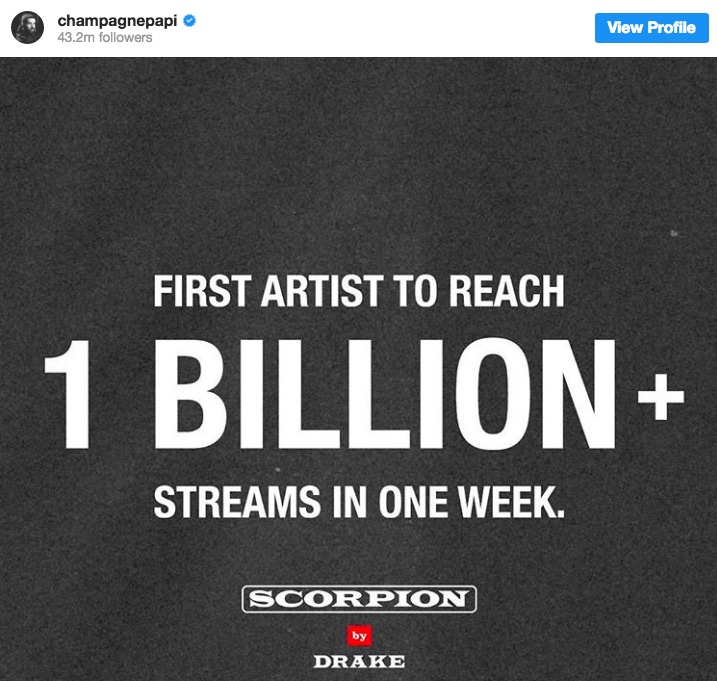 Few people are surprised that Scorpion, the fifth album from rapper Drake, has done well.  But how many industry insiders expected Scorpion to break the one-week billion-stream barrier?

Looks like Scorpion has the biggest sting of any modern release. The album was streamed more than 745 million times in the U.S., according to Billboard.  That handily bests the previous record holder, Beerbong & Bentleys from Post Malone, which was streamed some 431 million times in its first week.

But the global picture gets even bigger: according to the tally from Drake’s Republic Records (UMG), the Toronto rapper scored more than 1 billion streams worldwide.  Drake proudly blasted the accomplishment on Instagram.

Scorpion’s record-breaking performance raises the question of whether Spotify disproportionately tipped the totals.  Drake is certainly a top-tier performer without any third party promotion or assistance.  But still, it’s hard to ignore the fact that he virtually took over Spotify on Scorpion’s first weekend.  So much so that some Spotify regulars demanded a refund.

The album was streamed on Spotify alone more than 132 million times on its first day.

Regardless of the respective contributions to Scorpion’s streaming record, Scorpion could end up dominating the record books for some time.

Scorpion features plenty of over-the-top music and guest performances from a number of important artists, the late Michael Jackson and Jay-Z being among them.  Perhaps some of those guest appearances also helped Scorpion achieve streaming heights previously unknown.

If there’s any bad news for the popular rapper, it is the fact that Scorpion may prove hard to beat when it comes time to Drake’s sixth album. That’s the trouble with beating records. Everyone expects you to do even better the next time.