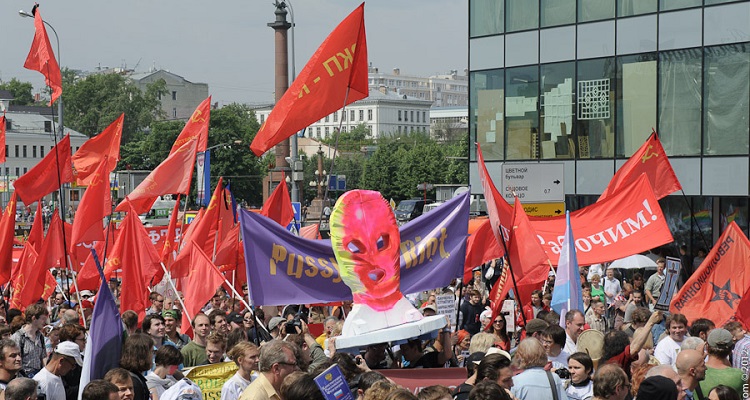 Pussy Riot activists run onto the field at the World Cup.

Controversial Russian punk rock/activist band Pussy Riot has claimed responsibility for people running onto Luzhniki Stadium during the final match of the World Cup.  In a statement, the group alluded to a world without “earthly policemen” who “break our world apart.” 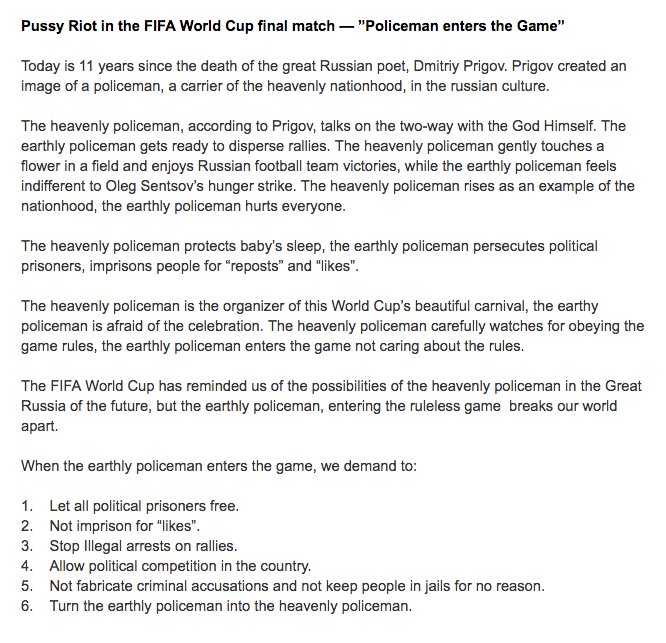 Vivendi has announced a new festival at Limoges, France next June.  The mayor of Limoges had awarded the company a grant for the festival, asking executives to do “something in Bordeaux.”

Too much noise from another stage can apparently prove distracting for Massive Attack.

“The organizational team did everything possible to delay schedules of other bands and find a time slot where Massive Attack might be comfortable, but the unilateral decision of the band has been canceling their show.  From Mad Cool, we sincerely apologize to all attendees for the inconvenience and possible heartbreak this may have caused.”

The British government has stated that it “won’t stand in the way” of drug testing at music festivals and clubs.  Speaking with The Independent, Home Office policing minister Nick Hurd said that he stands with police chiefs who want to allow drug testing.

”The fact that chief constables in Avon, Cumbria, Somerset, and Hampshire have stepped forward… We do want to cooperate with this.”

Spotify has launched its self-serve advertising platform in Australia.  The company had completed six months of testing Spotify Ad Studio in the country.  The feature allows businesses to upload scripts and select background music.

Manny Halley, CEO of Imani Media Group, has signed a development deal with NBC’s Wilshire Studios.  Imani Media will develop and produce scripted and unscripted content for NBCUniversal’s portfolio, including Bravo, E!, USA, and Oxygen.  Halley has served in the music industry for over two decades, working with artists including Nicki Minaj, Young Thug, and Keyshia Cole.

Bruce Dickinson, Iron Maiden’s frontman, has announced a spoken-word tour in Australia to support his autobiography, What Does This Button Do?  The five-stop tour kicks off on October 18th in Sydney and ends in Brisbane on October 24th.

Actress/singer Mandy Moore has confirmed she will release new music.  On her Instagram page, she wrote,

“Getting back to it.  It’s time.  I miss it.  I’m not scared anymore.  No more excuses.  No more allowing someone’s else insecurities to dictate my relationship to music and singing.  Boom.”

BMG has partnered with former Hall & Oates frontman Daryl Hall and television executive Jonathan Wolfson to relaunch ‘Live From Daryl’s House.’  The agreement includes worldwide rights to the series’ 82 episodes.  The company will seek distribution partners for the new episodes.

They Do, a new music PR agency, launches.

Nigerian songwriter, singer, and producer Odunsi has signed a deal with Warner/Chappell Music for worldwide distribution.  The Afro-fusion artist is currently working on his next LP, Rare.

Nashville singer/songwriter Amy Stroup has signed with WME.  She will release her solo album, Helen of Memphis on August 10th.