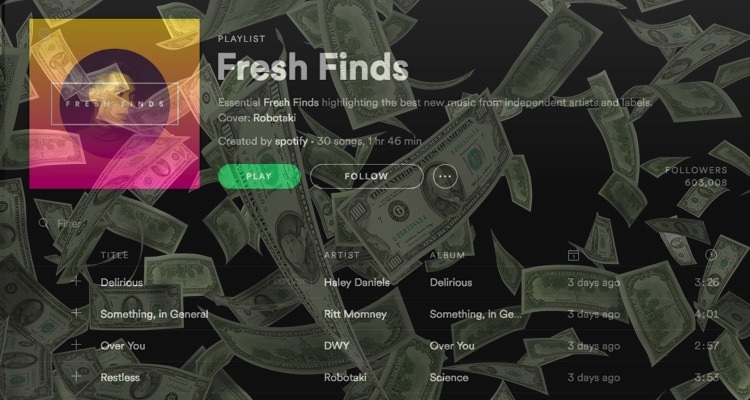 Let’s face it – Spotify still has a playlist payola problem.  To land on most major playlists on the music streaming platform, artists are still handing over hard-earned cash.  And those with influential, big label ties frequently enjoy top slots.

Spotlister, for example, promised to score playlist slots for artists.  For $2, one of 1,500 curators would consider a track.  Then, if eligible, Spotlister would sell musicians direct playlist access on Spotify.  The company – founded by two 21-year-old college students – took on 15 to 20 clients a month.  Artists paid the service $1,000 to $5,000 a month to “secure prominent placement on playlists.”

Spotify, of course, immediately shut down the company for breaching its Terms of Service.  The two university students – along with most artists who used their ‘services’ – found out the hard way that the streaming music platform doesn’t exactly tolerate selling prominent positions to its playlists.

Now, these companies could close their doors thanks to a recent announcement from Spotify.

The company has rolled out a new feature in beta.

After logging into the company’s Analytics page, Spotify for Artists account holders and label representatives can select an unreleased song for playlist consideration.  The company states the new feature offers “unprecedented, efficient and easy access to Spotify’s entire global editorial team.”  Spotify has over 75,000 artists currently featured on editorial playlists each week and 150,000 on Discover Weekly.

Artists will first have to give as much information about the track as possible.  This includes the song’s genre, mood, and other data points including instruments and the specific culture.  Spotify says this will help editors “make decisions about where it may fit.”

In fact, Nick Holmsten, Vice President of Content and Global Head of Shows and Editorial, said this feature marks the company’s first step to “connect music with the right people.”

“The number one question we get from labels, artists, and their teams is: who do I speak to to get on Rap Caviar, Hot Country, ¡Viva Latino!, Ultimate Indie or other Spotify playlists?  We’ve listened to feedback from the creative community, and developed a new feature that enables them to easily submit unreleased music for playlist consideration to our entire worldwide team of playlist editors.”

But, will this really put an end to payola companies?

Despite today’s announcement, some musicians will still pay money for a prominent position on a popular playlist.  Yet, the ‘playlist consideration’ features marks an important step against this ethically questionable practice.

In fact, the company sent a strongly-worded message to artists considering paying for prominent playlist positions.

“We want to make something crystal clear: no one can pay to be added to one of Spotify’s editorial playlists.  Our editors pick tracks with listeners in mind.  They make these decisions using data about what’s resonating most with their community of listeners.”

Of course, this doesn’t explain how playlist payola companies have managed to land tracks on the platform in the first place.

The blog post adds that the submitted track information will ‘impact’ personalized recommendations.  Songs tagged and submitted seven days in advance by an artist will appear in each follower’s Release Radar playlists.  Spotify says this allows artists to have control over which singles they promote to fans.

The company ended its announcement vowing to improve this feature to ensure the platform has “better playlists for Spotify listeners.”