MSG Defends Its R. Kelly Booking: ‘We Have a Long History of Not Censoring Performers.’ 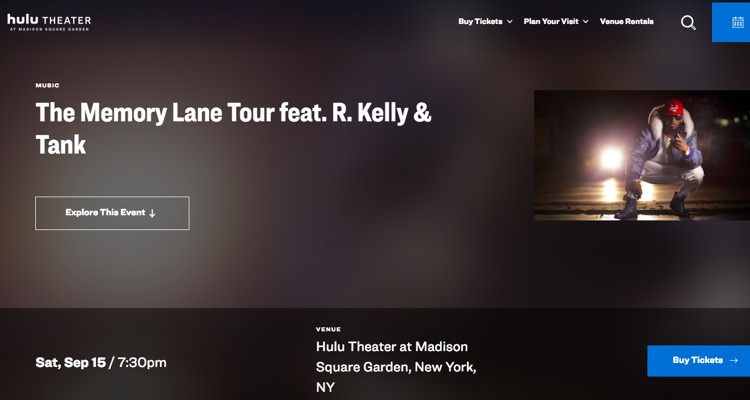 Madison Square Garden is going forth with its R. Kelly booking, despite howls of protest against the singer.

It’s official: R. Kelly is scheduled for an upcoming performance at the Madison Square Garden Hulu Theater in New York City this coming September.  It’s easily one of R. Kelly’s biggest performances in years — but it’s being met with serious protest.

MSG, however, is defending its decision to allow Kelly’s show to take place.

The singer has become embroiled in some serious accusations.  Just last year, Buzzfeed News published a piece about Kelly’s alleged sexual abuse cult.  The story included allegations that Kelly has “brainwashed” several females who live with him. Reportedly, those females live at properties owned by the singer and the women are controlled by Kelly.

Parents of one alleged victim in the report claim that their daughter is being held against her will.  The daughter claimed she was “in love” and Kelly was taking care of her.

Due to the allegations uncovered by the Buzzfeed story, a public outcry has emerged, with demands to strip the singer of lucrative deals.

Back in May of this year, a non-profit group named SisterSong in Durham, North Carolina protested the singer’s concert appearance at Greensboro Coliseum. It was part of what’s been referred to as the “#MuteRKelly” movement on social media.

Spotify recently removed the r&b singer from a number of highly-trafficked playlists, citing violations of its ‘Hateful Conduct’ policies.

It should be noted that R Kelly is not facing any criminal charges currently.  In addition, the singer has denied allegations of abuse or predatory sexual behavior.  However, back in late May, it was announced that Hulu has a documentary in development which covers the sexual abuse claims against the singer.  The film is reportedly based on the Buzzfeed report.

There’s no word on the release date for the documentary, but it makes the booking at a Hulu-branded theater pretty interesting.  The Hulu Theater has a reported capacity of just 5,600 people, which is just a fraction of the broader MSG capacity.

An MSG representative told Spin that the venue is standing behind their “long history of not censoring performers.”

The rep also mentioned that the performers have a right to rent their venue and the public has the choice if they want to attend the event or not.  The official MSG website has “The Memory Lane Tour feat. R. Kelly & Tank” scheduled for Sept. 15th, 2018.

The singer, whose real name is Robert Sylvester Kelly, rose to fame during the early 1990s with the group Public Announcement.

Over the years R. Kelly released a string of other hits, including “If I Could Turn Back the Hands of Time,” “Gotham City,” and “I Believe I Can Fly.”  The latter of those songs was featured on the Space Jam movie soundtrack and earned Kelly three Grammys.

Kelly was nicknamed the ‘King of R&B’ early on, though controversy began to arrive just as quickly.

His first scandal came in 1994 when the 27-year-old married 15-year-old singer Aaliyah. That marriage was annulled in less than a year after Aaliyah’s family took legal action.

Further claims arose in 2002 when a video revealed what was alleged to be Kelly engaging in sex with a minor.  The singer was ultimately found not guilty of the charges.