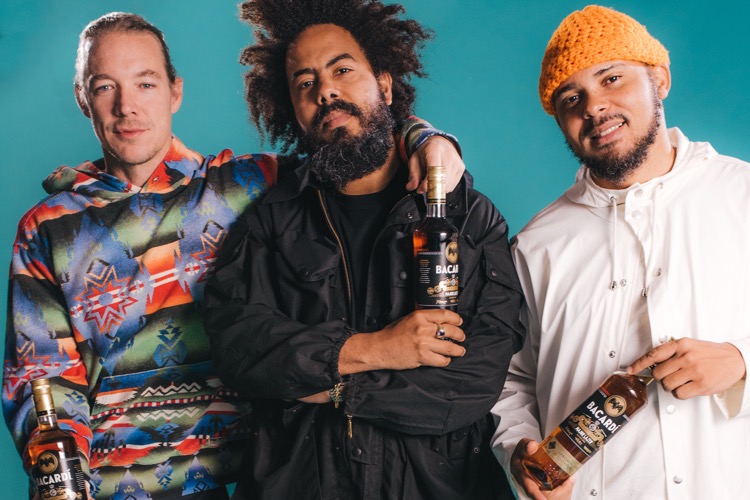 Bacardi and Major Lazer’s long-running branding campaign is now being boosted by SoundCloud — with artists potentially getting signed.

SoundCloud’s back-from-the-brink comeback is now attracting some serious partnerships.  That includes Bacardi, which is moving to expand the reach of its successful Major Lazer branding campaign.

Early this morning, SoundCloud confirmed to Digital Music News that the streaming platform would be boosting the Bacardi+Major Lazer initiative called ‘Music Liberates Music’.  Specifically, SoundCloud will be hosting entries by new artists, which will be critiqued and vetted by the members of Major Lazer (Diplo, Jillionaire, and Walshy Fire).

In a nutshell, artists from the U.S., Puerto Rico and the Bahamas will be asked to submit music on SoundCloud.  After a review period, Major Lazer will critique one dozen finalists, specifically using SoundCloud’s commenting functionality.  At the end, four artists will emerge as winners.

The ‘final four’ will actually be crowd-selected, based on fan engagement.  Specifically, those with the most plays, likes, and shares on SoundCloud will be plucked to shoot a music video, with Bacardi footing the bill.

After that, anything goes, including further artist development, signings, or even a branding pact with Bacardi itself.  Even better, this is all happening on SoundCloud, where smaller stories are increasingly turning into much bigger stories.

Of course, that draws lots of attention towards Bacardi, and targets a coveted demographic.  But it also helps SoundCloud to promote its growing reputation as a tastemaker and artist development platform.

That’s becoming increasingly obvious to anyone involved in rap, with mega-stars like Post Malone and XXXTentacion getting their start on SoundCloud (just to name two).  In turn, SoundCloud looks interested in broadening that competitive advantage.

“We’re excited to work with Bacardi on Music Liberates Music because it showcases the incredible emerging talent on our platform and aligns with our mission to empower the world’s audio creators,” explained Chris Blackburn, Head of Global Sales and Partnerships at SoundCloud.

“SoundCloud is where creators go to build and grow their careers first, and our goal is to bring brands like Bacardi opportunities to support creator growth, and connect them with our unique audience who’s at the forefront of music discovery and culture.”

The connection with rum is also perfect, given that Jillionaire is Trinidadian and Walshy Fire is Jamaican.  A vast majority of the world’s rum hails from the Caribbean and Latin America.

Interestingly, the Bacardi+Major Lazer team didn’t tap YouTube for this phase of their partnership, despite the group’s massive success on the platform.

At present, Major Lazer’s ‘Lean On’ has more than 2 billion YouTube views, making it one of the biggest videos on the platform.  But when it comes to courting newer talent and growing artist audiences, YouTube probably wasn’t the best choice.

Additionally, YouTube’s commenting system can quickly devolve into a dumpster fire of non-sequiturs, while SoundCloud’s comments tend to be more constructive and specific (with comments even targeted to specific parts of the track).

Just recently, SoundCloud expanded its commenting system into the mobile realm, furthering its feedback loop.  That expansion will likely assist this latest initiative, as well as future partnerships.