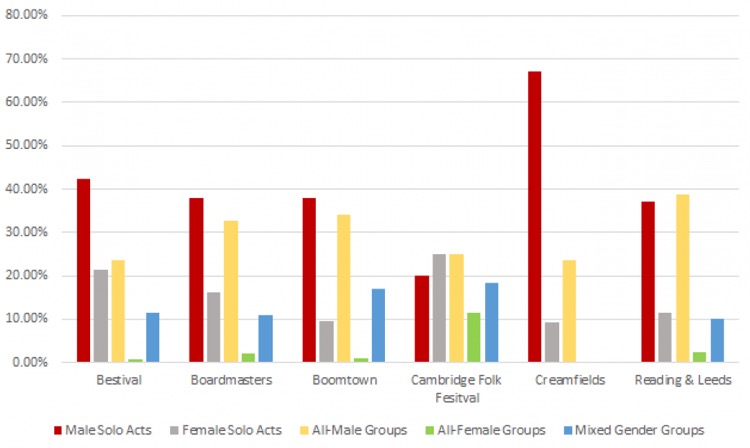 A recent study of leading UK music festival lineups has found that all-female groups are virtually non-existent, while women comprise 25% of solo acts.

Do leading music festivals have a gender disparity issue?

Most certainly yes, according to Musicngear, which just emailed Digital Music News the results of its UK-based festival survey.  The company wanted to figure out what the ratio was between male and female performers, and simply counted up the lineups of six major festivals in the UK.

The results found that all-female groups were virtually non-existent, while female solo artists represented 25 percent of total solo  billings.  ‘Mixed gender groups’ accounted for 13.2% of the total, according to the study.

The study involved six major festivals: Bestival, Boardmasters, Boomtown, Cambridge Folk Festival, Creamfields, and Reading/Leeds Festival.  In total, 1,258 acts were included in the survey, with ‘acts’ including solo artists and groups.  A ‘group’ was measured as any musical ensemble with 2 or more people.

Musicngear founder Chris Roditis decried the findings and called for greater parity.  “It is discomforting to see after crunching the actual numbers across many important festivals how enormously huge the gender gap still is,” Roditis relayed.  “It is a fact that should be highlighted if we want things to change.”

But are all-female groups the best way to measure this disparity?

One key question is how many all-female artists actually exist when compared to all other artists (solo or group).  The answer may be that there isn’t a huge pool for festival promoters to pick from.  Scan Spotify’s top-ranked artists, for example, and few all-female groups pop out.

Hip-hop and r&b, which is easily the biggest genre on streaming platforms, also features very few all-female artists (and few female artists overall, for that matter).  In fact, both genres are heavily male-dominated, like many other genres.

One all-female group worth mentioning here is HAIM.  The group of sisters recently fired their booking agent when they found out that a male group received a far higher payout from the same festival.  Unfortunately, we don’t know who the male group was, though HAIM regarding the development as extremely sexist.

On the solo front, the stats seemed a lot different.  Out of total solo acts, women represented 25% of the total, according to the study.  And mixed-gender groups accounted for 13.2% of the total.

Unfortunately, the study focused exclusively on bucketing solo artists and groups, without aggregating the totals overall.  But why?

Musicngear told Digital Music News that a total count would be misleading.  “The research did not involve individual performers, as we thought that could skew the results (so, a six-member group would count as one as would a two-member group),” Musicngear’s Adam Maidment said.  “So, I’m afraid we don’t have that data available.”

We also asked how these numbers compare to the overall pool of available artists.

That’s an important metric, because it would demonstrate the gender mix that festival promoters have available to them.  For example, if 75% of all viable and available solo artists are women, but only 25% get selected, the problem is easier to identify.  But if only 12.5% of the viable pool are women solo artists, the situation is obviously different.

Maidment told us that this study didn’t go outside the 6 festivals, but he did cite a seriously male-skewed stat from Billboard’s charts.  “Females represented just 2.4% of all artists and 12.3% of songwriters on the Billboard Top 100 between 2012 to 2017,” Maidment told us, referring to a study from the USC Annenberg School for Communication and Journalism.

But are music festivals the cause of this problem, or a symptom of something bigger?

Privately, festival promoters have told Digital Music News that the gender imbalance isn’t being created by festivals, it’s merely reflected in their lineups.  And it’s unfair to blame festivals for merely selecting acts that fans want to see, regardless of their gender.

O&A, a ‘mixed gender’ duo that focuses on Country/Americana and recently played the Cambridge Folk Festival, feels differently.  “Of the festivals we performed at this year, some have been better than others about gender balance but, especially with headlining acts, there is a lot of work to be done to fix the gender representation,” the duo relayed (the group’s members are Obadiah Jones and Orian Peled).

“It’s not that there is a lack of female artists, there is a glass ceiling when it comes to the headline slots. There is currently such a refreshing new generation of female artists in our genres of Country and Americana music who deserve to headline and get more radio airplay.”

Meanwhile, some festivals and events have made serious pledges to change the gender mix.

That includes Iceland Airwaves, which successfully created a 50/50 gender-balanced event this year.  But critics noted that Airwaves had an easier challenge, given that its focus skews towards emerging acts.  Mega-events like Coachella and Glastonbury, are more heavily focused on superstar artists.  Sometimes that translates into a main stage performer like Cardi B, though more frequently, the slot goes to a male.