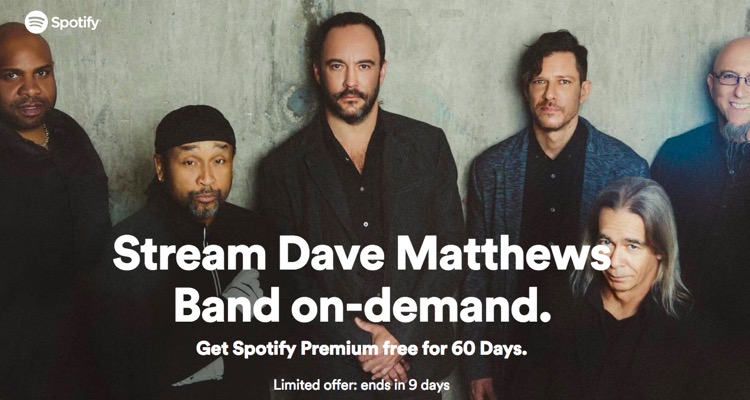 Spotify is currently advertising this 60-day offer on publications like The Independent.

Spotify has amped up its efforts to attract new subscribers by offering 60-day free trials to certain listeners — with a few caveats.

We’ve seen a few 60-day free Premium subscription offers floating around this month, with tight time restrictions and conditions involved.  The generous offers are likely an aggressive attempt to capture more of the streaming market market, especially ahead of ramp-ups by Amazon Music Unlimited.

According to Spotify’s terms and conditions, the offers are only available to Spotify listeners who have never signed up for a Premium subscription before.  Additionally, this free trial offer will not accept prepaid cards or Spotify gift cards as a valid form of payment.

In the case of a 60-day offer tied into a Dave Matthews Band release (see above), the offer expires during the first week of September.

We first spotted the 60-day expansion in early August, though we’re not clear how aggressive the effort has been overall.  One downside seems to be that users who are on 30-day trials may be requesting a hop to the expanded 60-day period — at least judging from this tweet.

The offers could dissuade customers from going to Apple or Amazon, where credit cards are required after three months in most cases.  Currently, Spotify has more than 83 million paying subs, while Apple recently crossed the 50 million mark (of which a small percentage are on free trials).

Sounds like a wide enough lead, though Apple says it’s ahead in key areas.  Looking at the United States alone, Apple has overtaken Spotify’s position as the top music streaming service in terms of paying subscribers.  And Apple CEO Tim Cook says the service is also beating Spotify in Canada and Japan, as well.

Then there’s a serious difference in growth rates.

A report in the Wall Street Journal says that Apple Music’s service is growing at 5% a month in the U.S., while Spotify’s paid subscriber base is only seeing 2% monthly growth.  Those numbers were published in February, though Apple surpassed Spotify’s US-based subscriber tally a few months later.

This 60-day free trial effort will no doubt help Spotify convert some of its free listeners into paid subscribers.  But it’s unlikely that it will be enough to help the Swedish company surpass Apple Music’s 5% growth rate.

All of which raises the question: when will Apple Music have more paying subscribers than Spotify, worldwide?  According to simple math, this is only a matter of time — though let’s not pick a winner yet.

Meanwhile, Spotify has also focused on setting itself apart by offering unique podcasts hosted by celebrity talent, as well as playlist-themed concerts and events. The company is also experimenting with merchandise for its curated playlists as a means to grow its dedicated user base in the U.S.