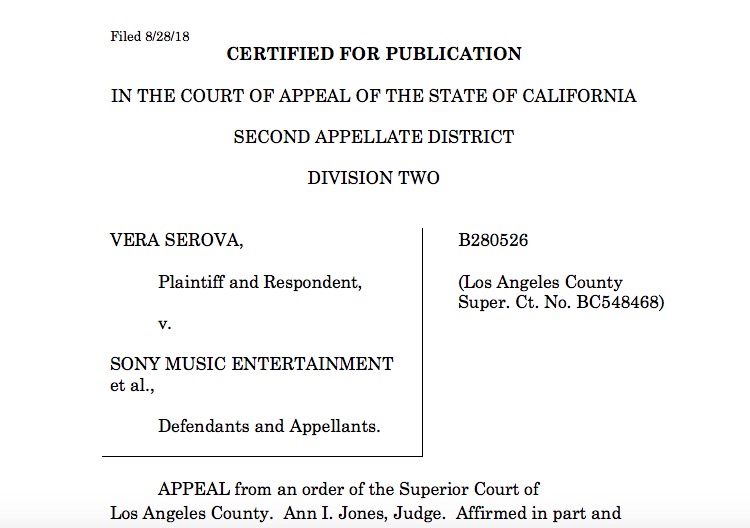 A class action lawsuit over three (possibly) fake songs on a 2010 posthumous Michael Jackson album will continue.  But Sony Music Entertainment and the Jackson Estate are no longer defendants.

Are the songs fake?  Quite possibly. Is this Sony Music’s or the Jackson Estate’s problem?  Not anymore.

Maybe there’s a lesson here about the hazards of riding the posthumous gravy train too long.  Whether Tupac or MJ, maybe there’s a point where enough is enough.

And if you want to know what a rabid fanbase looks like, the renegade investigations surrounding Michael were downright scary.  The feverish pursuit of the truth included computer hackings and intrigue, with sleuthing fans even narrowing down the likely impersonator (more on that ahead).

Ultimately, fan Vera Serova started a class action lawsuit against Sony and other parties tied to the album, alleging deceptive representation against consumers and other commercial violations.

Back in 2010, Sony Music and the Michael Jackson Estate defended the authenticity of the three tracks.

These days, the pair is far more sheepish on the matter, admitting that they could be fake, but they can’t be sure.  That’s part of a well-crafted shift in legal strategy, one designed to pass the buck to the production team that handed them the MJ recordings and represented them as the real thing.

Which means Sony and its subsidiary, Epic Records, can’t be held liable here.  “Because [Sony Music, MJJ Productions and the Jackson estate] lacked actual knowledge of the identity of the lead singer on [“Breaking News,” “Monster” and “Keep Your Head Up”], they could only draw a conclusion about that issue from their own research and the available evidence,” U.S. appellate judge Elwood Lui opined.

“Under these circumstances, [Sony and the estate’s] representations about the identity of the singer amounted to a statement of opinion rather than fact.”

“They are therefore outside the scope of an actionable unfair competition or consumer protection claim in the case.”

Earlier this week, erroneous news stories misquoted Sony as admitting that the MJ songs in question were faked.

In reality, Sony’s attorneys were merely painting a hypothetical in U.S. Appeals Court, while maintaining the tracks could be faked (but they couldn’t be certain).  So there was no admission, just the hypothetical possibility of one.

Accordingly, the case will now continue against producer Eddie Cascio and his production company Angelikson Productions LLC.  Cascio was a friend of Michael prior to his death, and has roundly denied the allegations.  “I can tell you that it is Michael’s voice,” Cascio told Oprah after the controversy started flaring.

Others disagree, including LaToya Jackson and Michael’s mother Katherine, who called the tracks ‘fake’.  Vera Serova has even recruited the expert opinion of a forensic musicologist, who found marked discrepancies in the voices.

So who might this impersonator be?  Serova and others believe it’s Jason Malachi, who appeared to admit to the fakery on Facebook in 2011.  But Malachi’s manager quickly stepped in, and clarified that the Facebook comments themselves were fake.

The full Appellate decision is here.