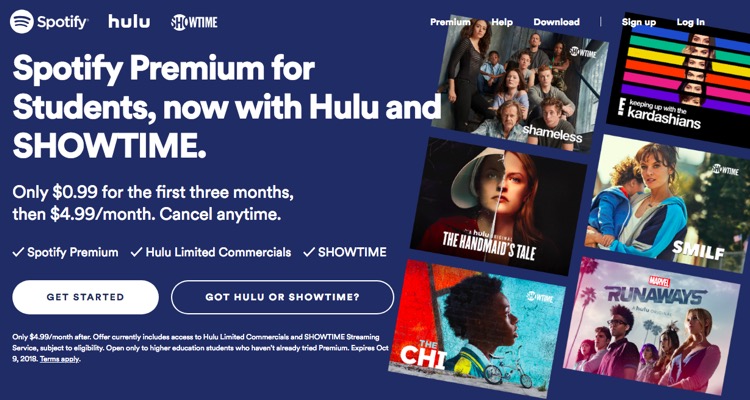 Spotify is gunning for college students on the fence with a seriously-discounted bundle.

This isn’t the first time Spotify has offered a low-cost intro for college kids.  But this deal is one of its best.

Just this morning, the streaming giant sweetened the offer for ‘higher education students,’ with a three-month 99-cent intro period.  From now until early October, a package of Spotify Premium, Hulu, and Showtime costs just $4.99 a month, after the three-month intro bargain.

If you’re already a Premium subscriber, you’re out of luck.  But everyone else is fair game, including those migrating from other paid platforms.

Specifically, the offer applies to those enrolled at a ‘US Title IV accredited college or university, and above the age of 18’ — and yes, they are checking IDs.

The addition of Showtime is a nice perk, though Spotify has been packaging Hulu since last year.  Now, it’s getting harder to say no, with Spotify hoping to lure ad-supported or ad-blocking users into a credit card relationship.  “Never before have students had this level of streaming entertainment options, at this unprecedented value, all in one package,” explained Spotify chief premium officer Alex Norström.

The move is obviously aimed at luring subscribers away from Apple Music, Amazon, and other streaming music competitors.  We’re not sure of the math on a lifetime subscription, but many of these $5/mo. accounts will transition into full-fare accounts once grads enter the professional world.  Or at least that’s the idea.

That introduces calculations of what a lifetime customer is worth over the course of 10, 20, or more years.  In the end, a long-term account may easily pay for scores of 99-cent ‘trials’.

The key, of course, is to get you hooked.  But while cut-rate plans are great for boosting numbers, they drag the ARPU considerably.  That makes it difficult to draw ‘apples-to-apples’ comparisons with competitors like Apple Music — so to speak — especially since Apple is typically charging full-fare after a limited three-month free trial.

That may be the lasting legacy of Apple’s Jimmy Iovine, who recently took a backseat at Apple Music but has long criticized the devaluing impact of ad-supported accounts.  The result has been a more valuable and engaged Apple Music audience.  In a head-to-head showdown involving Drake’s latest release, Scorpion, the numbers suggested a major disparity in the ‘quality’ of Apple’s streaming audience versus that of Spotify.