Gibson Guitar Could Emerge from Bankruptcy In Just a Few Weeks 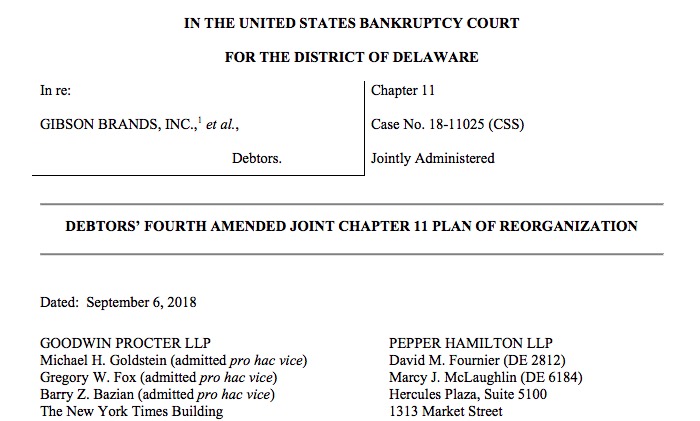 Gibson Guitar’s arduous bankruptcy could be coming to a close, according to negotiation details now emerging.

A few months ago, we first reported that Gibson Guitar was about to enter Chapter 11 bankruptcy.  Now, it looks like Gibson is likely to make it out alive.

According to the paperwork filed in the U.S. Bankruptcy Court in Delaware last week, a broad-reaching agreement involving various creditors looks close to being sealed.  If the complex deal is approved by all sides, a restructured Gibson Guitar will have another shot at life.

The latest filing represents the fourth revision to a working agreement, with approvals potentially coming in a matter of days.  The ‘Fourth Amended Joint Chapter 11 Plan of Reorganization’ can be found here.

As part of the deal, chief creditors like Blackstone and Philips Electronics would accept reduced paybacks on their outstanding loans.  Specifically, Blackstone unit GSO Capital Partners would be paid $30 million, while Philips would accept a payout of $57.2 million.

Of course, neither payout represents the full amounts owed.  But both groups could benefit from future upside, especially if the restructured Gibson manages to grow post-bankruptcy.  Also central to this arrangement is private equity group KKR, which would assume a far greater level of control over the company.

If signed, Gibson the debtor will become Gibson the restructured guitar company.

Henry Juszkiewicz, the ousted CEO and a previous owner, would assume a seriously reduced role in the restructured entity.

Specifically, Juszkiewicz would embark on a permanent leave and lose most of his equity in the company.

Accordingly, Gibson would “delegate all responsibility and functions as chief executive officer” to a brand-new Chief Restructuring Officer, Brian Fox, who actually works for turnaround specialist Alvarez & Marsal.  Gibson, under newly-restructured management, would also hire other outside consultants to complement Fox’s role.

Earlier, creditors demanded the ouster of Juszkiewicz, who in turn refused to budge.  But that standoff is clearly over.

There’s another key player here: David Berryman, who was also one of the principal pre-bankruptcy owners.  In the new plan, Berryman and Juszkiewicz would collectively own less than 3.5% of the company.  Juszkiewicz, in turn, would have no role in the company unless the company specifically called upon him.

Here’s the applicable language in the agreement:

“The Supporting Principals have agreed that the Management Employment and Consulting Agreements shall be drafted such that (a) the aggregate amount of New Common Stock to be received upon exercise of the New Warrants received by Messrs. Juszkiewicz and Berryman under such agreements shall be reduced from 4.5% to 3.45%; and (b) Mr. Juszkiewicz shall receive $650,000 and not $1,500,000 of Profits Interests under such agreement otherwise consistent with the Restructuring Support Agreement;”

Sounds like a demoralizing stripping of responsibility, though Juszkiewicz would still earn a full salary plus benefits.  We’re not sure if there are any non-competes tossed into this mix.

The updated terms are still not approved, and stakeholders still have the next few weeks to approve the plan.  This is the fourth revision to an ongoing negotiation, though the continued changes suggest that an agreement is getting close.

You can see the entire filing here.