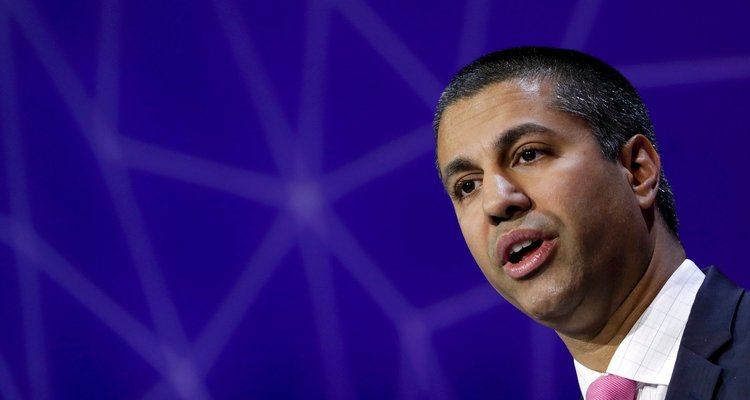 In a speech Friday, Pai flatly declared that California’s newest net neutrality bill is “illegal”.  The bill has already passed through the state legislature and, barring federal opposition, will become law when Governor Jerry Brown provides his signature.

Here’s what Pai told a group at the Maine Heritage Policy Center in Portland:

“The broader problem is that California’s micromanagement poses a risk to the rest of the country.  After all, broadband is an interstate service; Internet traffic doesn’t recognize state lines.  It follows that only the federal government can set regulatory policy in this area.

“For if individual states like California regulate the Internet, this will directly impact citizens in other states. Among other reasons, this is why efforts like California’s are illegal.”

Pai also cited a court ruling that seems to favor his opinion, and promised a fight ahead:

“In fact, just last week, the U.S. Court of Appeals for the Eighth Circuit reaffirmed the well-established law that state regulation of information services is preempted by federal law. Last December, the FCC made clear that broadband is just such an information service.

“So let me be clear: The Internet should be run by engineers, entrepreneurs, and technologists, not lawyers, bureaucrats, and politicians. That’s what we decided in 2017, and we’re going to fight to make sure it stays that way.”

As a result of Pai’s opposition and California officials’ standing behind their efforts, a legal showdown may be imminent.

Pai claims that the FCC’s net neutrality regulations (or lack thereof) supersede state laws, while California contends that it has the right to regulate the internet as they see fit.

The net neutrality bill proposes several sweeping changes to California’s oversight of ISPs and internet infrastructure.  If successfully enacted, the bill would effectively make California home to the most far-reaching net neutrality standards in the country — standards that far exceed those established during the previous presidential administration.

The bill stipulates that internet service providers (ISPs) cannot charge companies additional fees to reach customers (both generally and in terms of data plans), that data may not be ‘throttled’ or slowed to customers.  Additionally, unlimited data programs that favor certain companies will be illegal.

On the latter point, T-Mobile’s heavily advertised Netflix promotion, wherein users are given the opportunity to watch Netflix content without using their monthly data, may be prohibited under the proposed California regulations.  The ban on ‘zero rating’ would prevent mobile and internet providers from accepting payments for the purpose of giving certain companies and media platforms priority over others.

Similarly, websites cannot be blocked by ISPs, according to the regulations.

It remains to be seen how exactly lawmakers on both sides of the aisle, at the state and federal levels, will respond to the situation. A courtroom showdown appears highly likely, but in the interim, it’s possible that some like-minded state legislators will pass net neutrality amendments of their own.

States have the ability to regulate their commerce, in many ways, but something as abstract and universally pertinent as the regulation of the internet appears to be a different matter.  At least according to Pai.