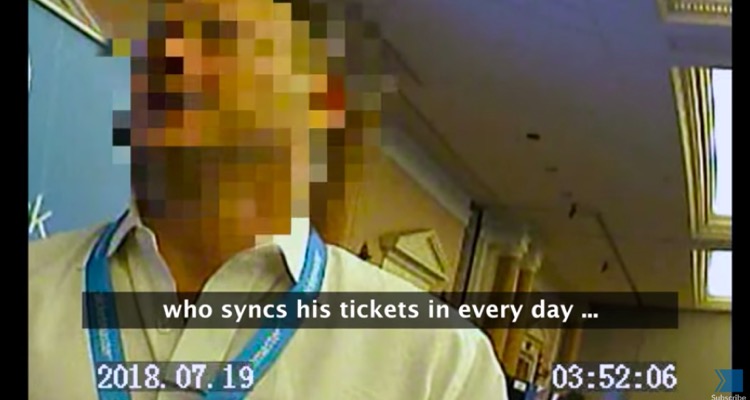 A new undercover investigation from CBC News and the Toronto Star has revealed what customers have long-suspected: Ticketmaster is working hand-in-hand with scalpers.

Back in July, the CBC sent reporters undercover to Ticket Summit 2018 in Las Vegas, which is a convention designed for live entertainment industry executives.  The reporters posed as scalpers with hidden cameras attached to their bodies while recording themselves being pitched on Ticketmaster’s professional reseller program.

That members-only program is called TradeDesk, billed as ‘The Most Power Ticket Sales Tool. Ever.”

Here’s a clip of what transpired.

The Ticketmaster representative who spoke to the reporters said that Ticketmaster’s resale unit turns a blind eye to scalpers who use bots and fake IDs to buy tickets to resell for inflated prices.

One sales rep says he has “brokers that have literally a couple of hundred accounts, it’s not something that we look at or report.”

The reporters further revealed a tool that allows scalpers to sync their Ticketmaster accounts to their online resale operation on sites like StubHub, Vivid Seats, and Ticketmaster.com.

CBC shared its findings with Alan Cross, who hosts the radio program The Ongoing History of New Music. Cross says this revelation is going to be a “public relations nightmare” for Ticketmaster. That’s pretty much an understatement, considering some of the reactions on social media to this news.

I’m pretty sure Ticketmaster is so hated they can’t have a public relations nightmare. They could skin and eat Gordon Lightfoot, and I’d still have to use them to get tix.

Ticketmaster is a scam start to finish. Artists and performers: let’s build a ticket infrastructure that gives this horseshit system some legitimacy and transparency.

Ticketmaster is effectively double-dipping on fees by charging the scalper fees for the initial ticket purchase and then again when the ticket is re-sold at a higher price through its “verified resale” platform on its own website.

Ticketmaster says they reserve the right to cancel accounts tied to the same person and multiple bot purchases, but the Ticketmaster resale representatives said his division does not share that information with Ticketmaster’s primary business side.

“We don’t spend any time looking at your Ticketmaster.com account. I don’t care what you buy. It doesn’t matter to me. There’s total separation between Ticketmaster and our division. It’s church and state … We don’t monitor that at all.”

Cue the incoming public relations nightmare, because everyone’s biggest fear about Ticketmaster supporting scalpers has proved to be true.