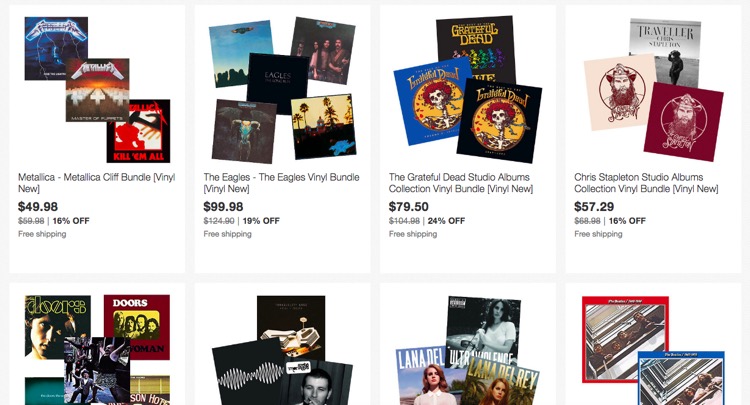 Some high-priced vinyl bundles for the ‘obsessed’ aficionados.

Pooh-pooh vinyl records all you want: the format continues to grow, and the action is spreading online.  Record Store Day, which helped spark the revival in physical retail, is now collaborating on an interesting online counterpart.

The resulting ‘Vinyl Obsession Week‘ features a wide variety of exclusive vinyl collections created by your favorite artists from all genres of the industry.  We actually caught wind of this a little late, but the action keeps going until Sunday (September 23rd).

After that, we’re guessing another ‘Vinyl Obsession’ event will surface, given the success of the format on eBay.  In an email to Digital Music News, eBay indicated at they’ve sold more than 24 million pieces of vinyl since 2007.  We’re guessing that eBay is witnessing a nice ramp-up in their vinyl-related in 2018.  Last year, the platform shifted about 3.6 million records.

So let’s see if this bumps that figure upward.  As part of the promotion, eBay is spinning a vinyl coupon that gives 10% off any  purchase of $50 or more.  Additionally, buyers can redeem a free, three month HiFi Tidal subscription (at least those that purchase from eBay seller eBay seller get_importCDs).  That higher-fidelity offering makes sense given the audiophile crowd in play.

Rhino Records is also part of this splash, with lots of remastered and curated vinyl bundles from acts like Metallica, The Doors, Grateful Dead, The Eagles, and more.

The rest of the selection spans Michael Jackson, Led Zeppelin, The Beatles, and even Chance the Rapper, with select signed vinyl and artist memorabilia.  There’s also a selection of hundreds of rare and in-demand vinyl collections, which is basically eBay’s bread-and-butter.

The vinyl records offered are not only coming from independent sellers, but record stores around the country.

And another nice tidbit: three signed, pre-ordered copies of ‘PLAY’ – a two part mini-document series directed by Dave Grohl — is also being offered.  All proceeds are also going to Musicians On Call and the Grammy Museum Foundation.

Separately, we’ve been tipped that vinyl record sales at Best Buy might be slowing down (more on that ahead).  Separately, the RIAA pointed to continued gains during the first half in the US.  So let’s see what jumble of data says over the next few months.