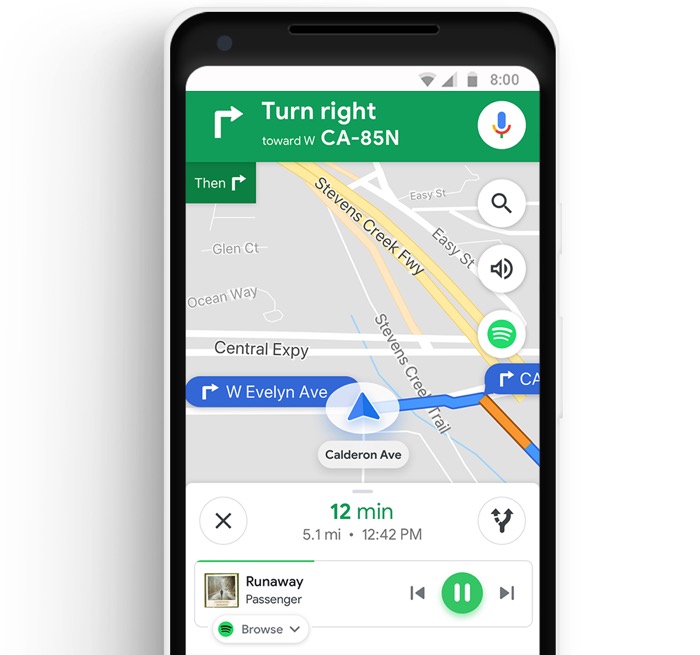 Google Maps continues to be one of the best mapping platforms for mobile users, but it’s annoying to juggle apps to get to your music.

Maybe this solves that problem — and improves safety in the process.  A new update for Google Maps is bringing new features for frequent commuters, including built-in music controls.

Alongside real-time updates for commuters, Google announced the integration of several popular music streaming services with Google Maps.  The integration will allow you to skip and go back, as well as pause and play.

Services that will be integrated into this new update to Google Maps include Spotify, Apple Music, and Google Play Music. Strangely missing from the list is Google’s newly launched YouTube Music app.

YouTube Music is more popular with Android users than Google Play Music, so it seems like a strange omission considering this is a Google-owned service. The YouTube Music app got a revamp earlier this year to make it a more accessible destination for watching music videos and listening to playlists.

Google says you can expect to see the updates for both Android and iOS users rolling out later this week.

Other features included in the update include real-time alert on traffic, accidents, and other delays that could affect your commute time.  Google Maps will supply alternative routes to get around the delay as suggestions in this tab.  The new update also includes support for different types of commuting, including walking, driving, and mass transit.

Spotify users have been enjoying integration with Waze (another Google platform) since 2017, so this is a welcome addition to Google Maps.

Once integration is set up inside Google Maps, users will see a small icon with their chosen music service on the sidebar. You can browse albums, songs, and playlists directly inside the Spotify app before switching back to your live navigation tab.